Over Easter I traveled with friends to Rome and the Campania region of Italy, encountering unique religious festivities, beautiful architecture and landscapes, as well as a ton of pasta and gelato. In Part One I reminisce about the sights and food of Naples, Sorrento and the Amalfi Coast, along with some tips for the student traveler. 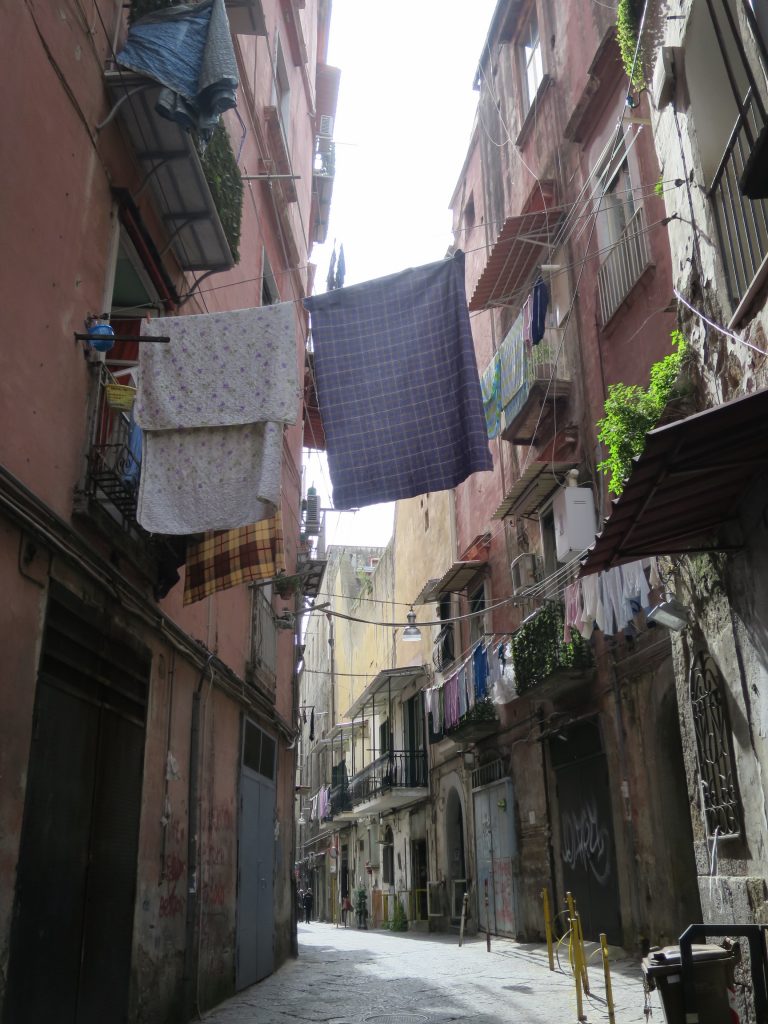 The streets of Naples – a grittier side of Italy.

Let’s be honest – Naples is not the most impressive city you’ll ever visit. Perhaps because of its notorious reputation as a pick-pocket hotspot with run down city administration (some websites claimed its streets were filled with garbage, not true), you won’t see many tourists on the streets. However, as easyJet flies to Naples, and visitors wanting to reach Pompeii and Sorrento from Northern Italy must change trains at Naples, this city is worth a day or two’s time. You will experience a grittier side of Italy that is so different from the polished cities of the north.

The downside to being a less popular tourist destination is that its tourist industry is rather underdeveloped. You’ll have a hard time finding the sights which are badly signposted, and only the top parts of major sights such as Castel dell’Ovo and Castel Sant’Elmo are open to visitors. Also, if you happen to be 3 Asian girls walking down the streets, you will get shouted and stared at by enthusiastic locals who seemingly have never encountered Asians before. However, the upside is that none of the attractions are crowded, which allows you plenty of time to soak in the gorgeous sea view. 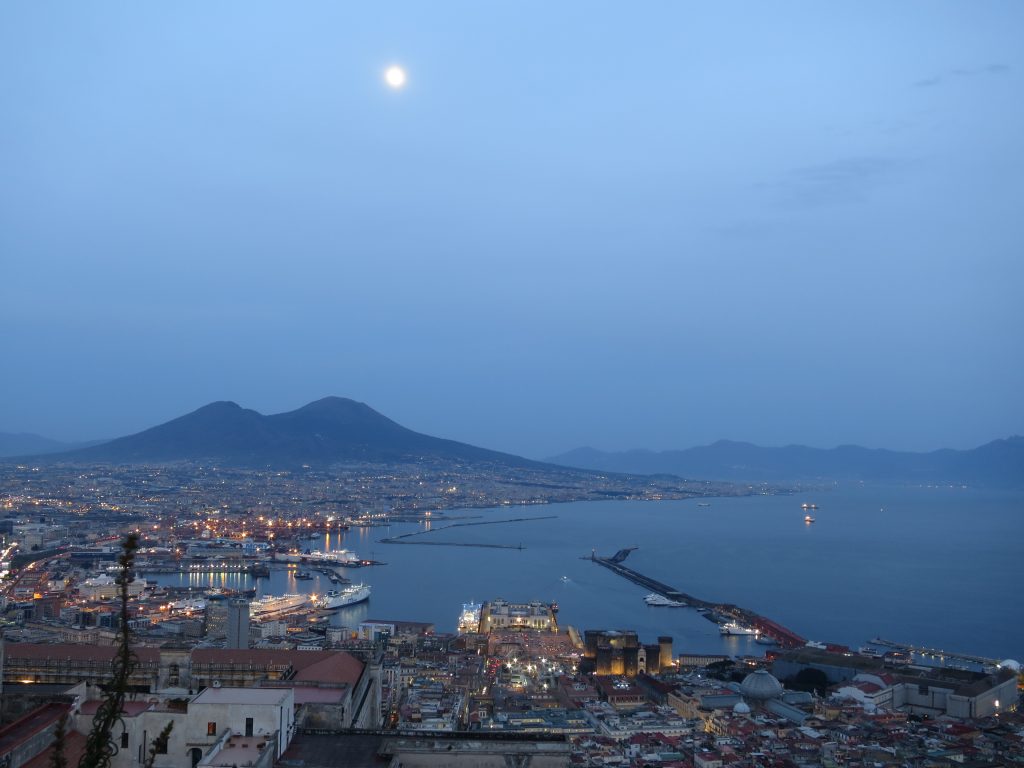 The streets of central Naples are narrow and lined with traditional houses with peeling pink and yellow exteriors. Something really worth seeing is Naples’ underground passages. There are several tunnels to choose from, but we went to the Napoli Sotteranea. These tunnels were first dug by the ancient Greeks to supply water and stone for the city, then illegally used for centuries as a garbage dump, then as bomb shelters during the Second World War. Today, a tiny portion are open to tourists. Another highlight was the Museo Capella Sansevero, which houses the famous Veiled Christ sculpture. The tissue-like quality of the cloth carved from marble which covers Christ was simply astonishing. We went up the hill to Castel Sant’ Elmo as the evening set in. This is the best spot for sunset pictures. You get not only a panoramic view of the city, but also of the gulf and Mount Vesuvius looming over everything.

Transport
Walking is your main option around the historic centre. But if you want to get to Castel Sant’ Elmo, the funicular, Naples’ tram network, is the way to go. Unfortunately, I wouldn’t recommend any other forms of public transport. The metro runs only once every 15 minutes, and our train broke down during the first (out of two times) we took it.

Naples’ pickpockets are especially a problem on the platforms of Naples’ largest train station, Garibaldi. This station is unavoidable if are want to reach Naples by train from Rome, or to reach Pompeii from Naples. Fortunately, as Easter isn’t the peak season, the station wasn’t too crowded. Another hotspot for pickpockets is on board the Circumvesuviana train which passes through Garibaldi. This is a commuter train which is the main form of transport for tourists and locals between Naples, Pompeii and Sorrento. Try Tandem for the best ragu you’ll ever have.

Naples is famous for its pizza, but for some reason we didn’t try any. We did however, have amazing ragu at Tandem. This small restaurant specializing in ragu is only a few minutes away from Museo Capella Sansevero. The ragu was so flavoursome. I would also recommend having some Sfogliatella, a shell-shaped pastry native to the Campania region of Italy, of which Naples is the capital. It has a flaky crust and has a creamy custard filing.

Sorrento is the place to stay for day trips to the Amalfi Coast and Pompeii. It is a very touristy town, but that doesn’t lessen its charm – its streets and buildings were rather peaceful during the Easter period, and there are many great restaurants and gelato places. 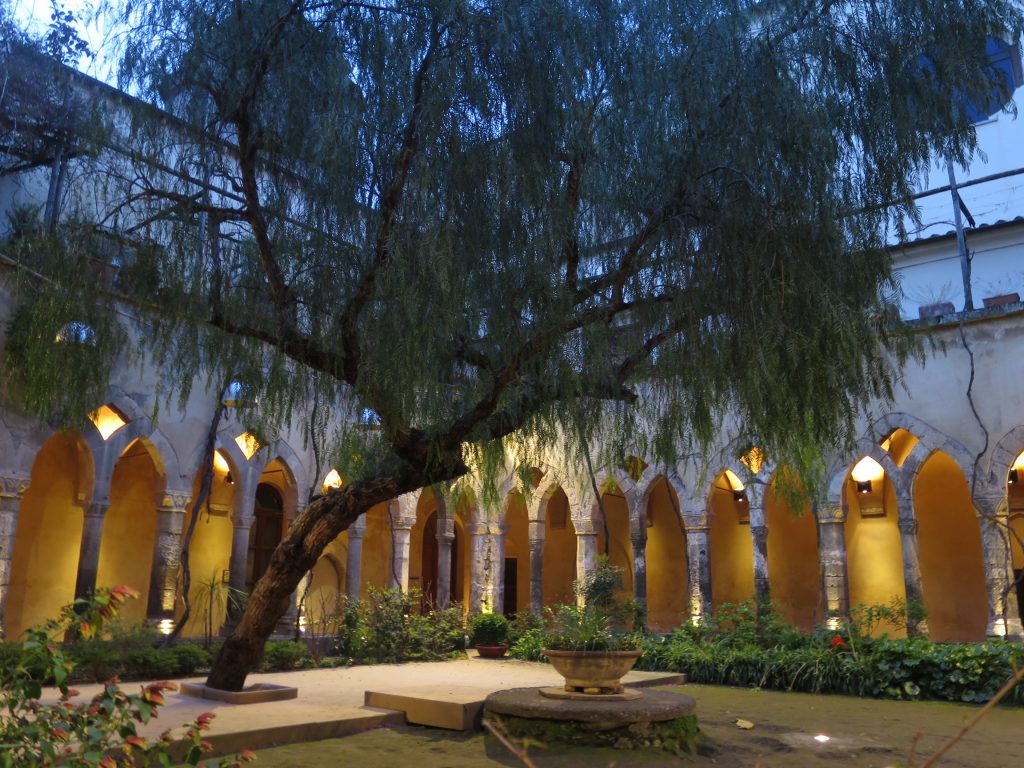 Walking from one end of the town centre to the other won’t take more than 5 minutes. A must see is the Chiostro di San Francesco, a 13th century monastery. It has a beautiful and serene cloister that makes you forget your 21st century woes.

We dedicated one afternoon to Pompeii. Although 3 hours is enough for visiting its highlights, it city’s size, once home to 11,000 people, meant it took us 5 hours to see 80% of its ruins. Must see buildings are the brothel, theatre, roman baths, bakeries (quite a few dotted round), the many thermopolia (shops/bars which sold food) and the famous Garden of Fugitives. Remember to pack lunch and drinks, as inside the city there is only one cafe. It’s worthwhile to get the audioguide, as there are no maps or English signs inside Pompeii. Like Naples, the tourism here felt underdeveloped. We got lost quite a few times. Also, many of the relics from Pompeii, including statues and mosaics are housed in the National Archaeological Museum in Naples, so most of the buildings in Pompeii are very bare. 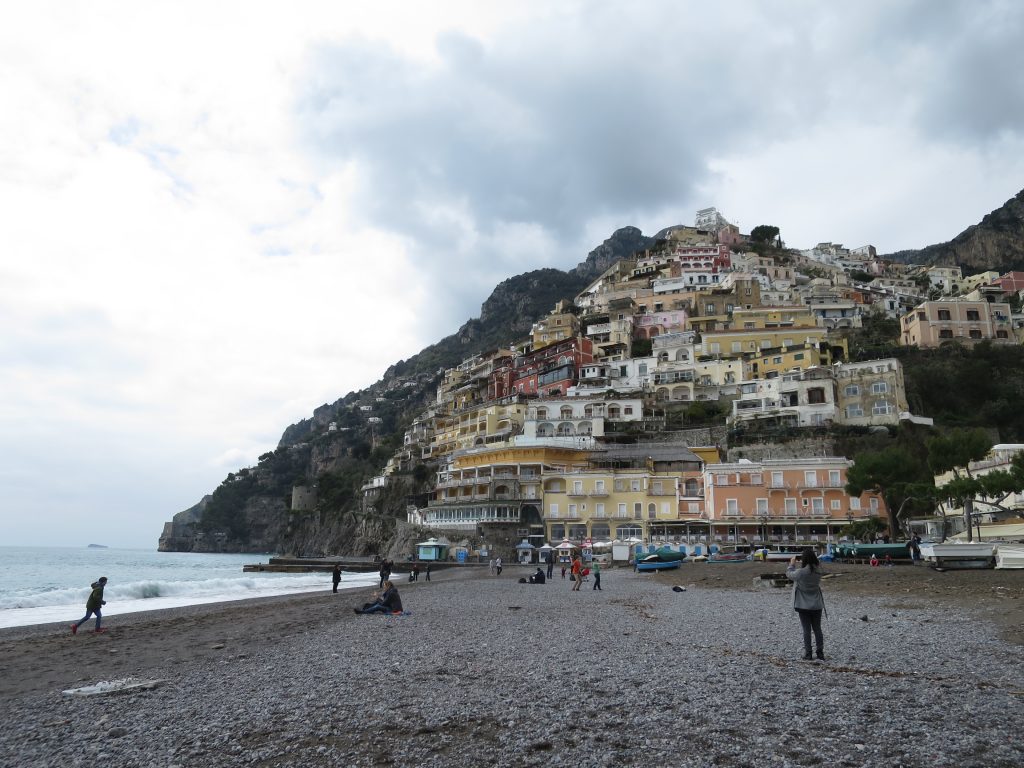 You’ve probably seen this view of Positano before on Instagram.

Another day trip we did was the Amalfi Coast. We first stopped at Positano. You’ve probably seen this picturesque town on social media. Its yellow and pink houses are delicately positioned along the sloping seashore. The narrow streets are just as delightful, filled with little boutiques selling tasteful (but expensive) crafts and vacation friendly clothes. It’s a 10-minute walk down to the beach from the bus stop, where you can soak in the sun, ocean, as well as attempt that perfect Instagram shot. We carried onto the town of Amalfi, but as the two are quite similar, Amalfi is unnecessary unless you really like Positano. 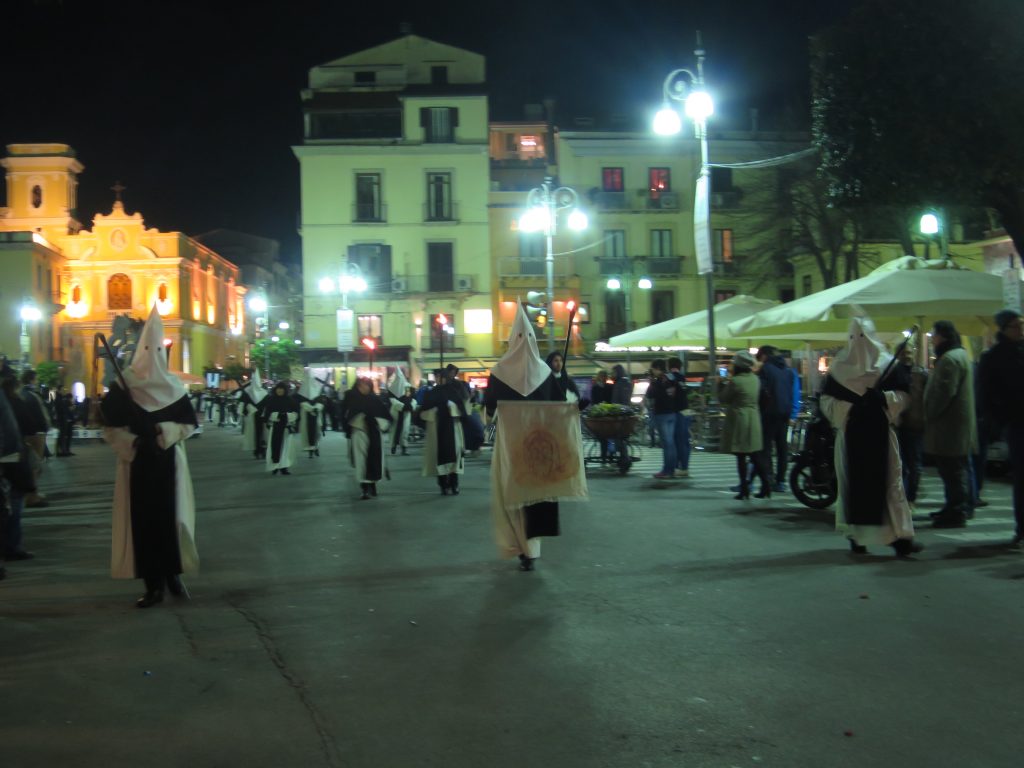 Sorrento’s Thursday procession – creepy or what.

We got to see one of Sorrento’s famous Easter processions, the Holy Thursday “White” procession, originating in medieval times. Representing the Virgin Mary seeking His Son, the procession travels around the city center from 3am to dawn, while bearing torches and singing psalms. Don’t moan about the time, it is a must see. Having slept through the 3am alarm we set, the sound of an orchestra entered my dreams. I opened my eyes and the music swelled. I opened the balcony doors, and the music flooded in from the streets below. Entering the piazza was a funeral march, followed by hundreds of figures cloaked head to toe in white. One of the most surreal and eerie experiences of my life, for 20-minutes these figures slowly marched around the square. When the music stopped all we could hear were their shuffling footsteps. Waking up a few hours later, we all wondered if it was a dream. 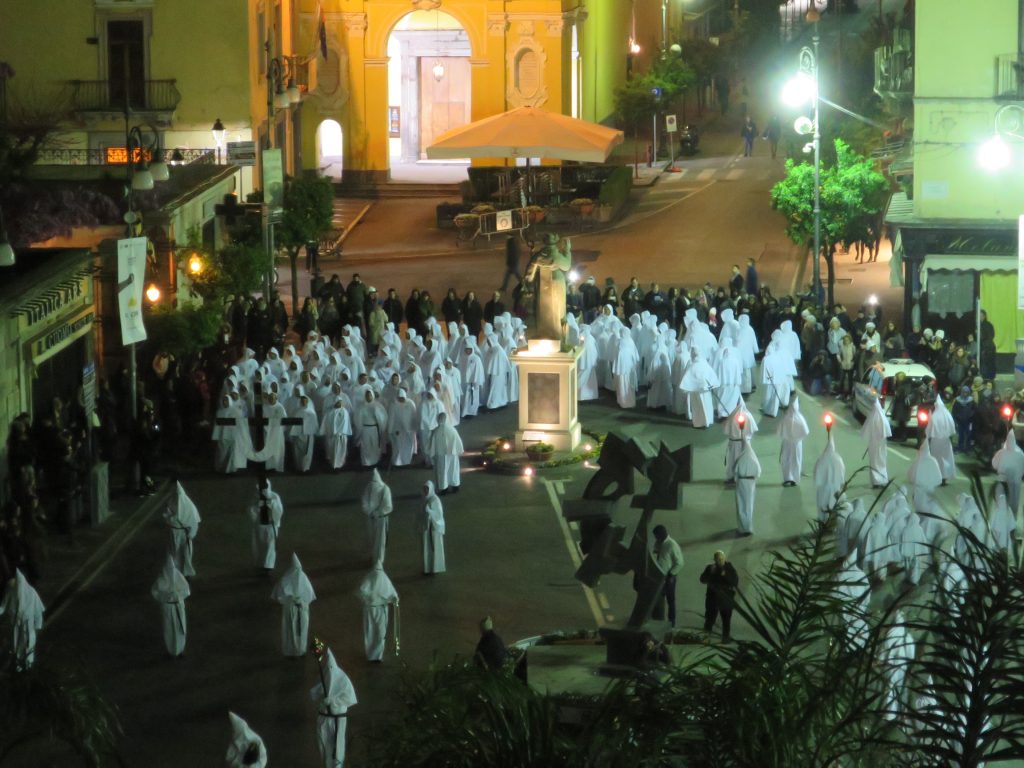 Delicious “pasta with catch of the day”.

Seafood is a must. I really recommend PortaMarina Seafood, one of the many seafood places in the Marina Grande. I had a pasta in tomato sauce with catch of the day, which was white tuna. It was simple but delicious from its incredible freshness. For dinner try Ristorante Zi’Ntonio. Located 1-minute from the central Piazza Tasso, you won’t miss it due to the many Michelin stickers on its door. This is an amazing, yet affordable restaurant with a wide variety of classic cuisine from the Campania region. I would recommend the seafood risotto, which was hands down the best risotto I’ve ever had, and its specialty, the cheese seafood linguine. After a hot day, I recommend Raku Gelato. It sells lots of creative and traditional flavours with a twist, such as chocolate, fig, mascarpone, pistachio, and yogurt. I particularly recommend the pineapple & basil, or banana, apple & lemon; all of which tastes like a vibrant smoothie. And all for the great price of €3 for 2 scoops. For a worn out box, the Circumvesuviana does go faster than you would expect.

To avoid the risky Circumvesuviana, we took the hydrofoil ferry from Naples’ Moro Beverello pier to Sorrento. It was a comfortable and spacious 40-minute journey, costing €12.30 one way ticket and €2 for luggage.

To reach Pompeii from Sorrento we took the Circumvesuviana, costing €4.40 for return. The journey takes 40-minutes due to frequent stops, but for a worn out, beige box covered with graffiti, the Circumvesuviana really does go faster than you would expect! Even on a rainy day, the train was packed with tourists and teenagers on their Easter vacation. You will be entertained on your journey by buskers who hop on and off the train. The stop to get off at is Pompei Scavi. There aren’t any announcements but follow the crowd of tourists and you won’t miss it.

To explore the Amalfi Coast, we took the Sitta Suo bus which departs from Sorrento train station and stops at towns along the coast. We bought the €8 one-day ticket, allowing us to hop on and off whenever. Remember – do not take this bus if you get carsick! Both of my friends had a pretty horrendous time. The switchback roads might look awesome on Top Gear with a sports car, but on a bus they are nothing but tedious. The journey from Sorrento to Positano, and from there to Amalfi took 40 minutes each. Still, the view of the turquoise sea was stunning as we edged along the cliff’s edge at 30km/h.

Stay tuned for part 2, featuring the unforgettable sights and tastes of Rome during Easter weekend, including a close encounter with the Pope.