Will the Catholics okay condoms? 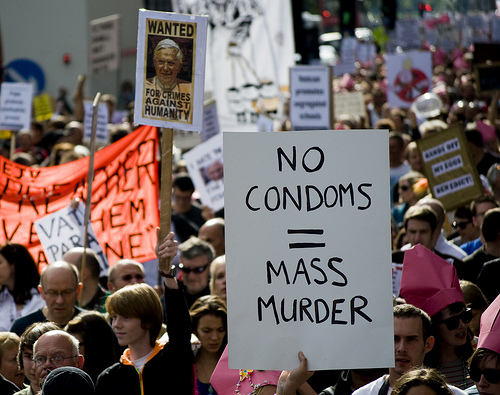 “Opposition to condoms kills people,” was the message emblazoned across just one of the banners paraded through the streets of central London this September. When the Papal visit sparked a string of protests across the capital, there was one major bugbear shared by many of the protestors: the Roman Catholic Church’s opposition to the use of artificial contraception, namely condoms. But in a new book which has hit headlines across the world, Pope Benedict XVI has finally advocated using condoms to prevent the transmission of HIV… at least in certain circumstances.

The Protest the Pope rally earlier this year reignited widespread hostility towards the Church’s teachings. It attracted more than 10,000 participants on the third day of his visit. The opposition ranged from the Church’s attitude towards women to the child abuse scandal to treatment of homosexuality, but one of the most significant concerns was that the Church’s infamous opposition to the use of prophylactics was enabling the spread of HIV. When grilled, comedian Al Murray cited as one of the key reasons that brought him to the protest, “the pope’s opposition to condoms kills people”.

Now whilst statistical evidence suggests that the spread of HIV appears to be slowing, there were still 2.6 million new infections last year globally, and the Church’s colossal authority on the behavioural habits of a considerable portion of the globe cannot be overlooked. Its insidious influence has of course spread to Africa, the fastest-growing region for the Catholic Church. Incidentally, 67% of the global total of people living with HIV can be found in sub-Saharan Africa.

It was whilst travelling to Africa last year that the Pope continued to tout the Church’s anti-condom stance, following his comments in 2005, which suggested that a “contraception mentality” was threatening the very possibility of “hope and stability” for the region. These were his wise words of advice as he addressed bishops from South Africa, Botswana and Lesotho.

So what’s changed? Now firstly, it should be made clear that the Pope isn’t about to start distributing condoms with all the enthusiasm of a Durham welfare officer during SHAG week. He isn’t even retreating with his proverbial tail between his legs and accepting that condoms could be a wise choice for the majority of the sexually active population. Benedict’s book proposes only – somewhat nebulously – that the use of condoms might amount to the “first step in the direction of a moralization” in “the case of some individuals”. His handy example is male prostitutes.

Whilst this may seem a curious choice of example given that the Church is hardly in favour of either homosexuality or prostitution, it really enabled the Pope to suggest condom usage could be a benevolent solution, without straying into even more dangerous territory: advocating the use of condoms in any type of heterosexual relations, where the use of contraception as birth control provides an entirely different function clearly at odds with Papal teaching.

What first sent ripples through the media was the way in which he was subsequently forced to address the matter of condom use between men and women. For a series of misunderstandings arose over the translation of the book: the German used the masculine word for “prostitute”, whilst the Italian used the feminine, causing over-eager adherents of his advice, plus all the beady-eyed cynics waiting for a further revocation of Church teaching, to ask: exactly what is this to mean?

“I personally asked the Pope if there was a serious, important problem in the choice of the masculine over the feminine. He told me no. The problem is this… It’s the first step of taking responsibility, of taking into consideration the risk of the life of another with whom you have a relationship.”

Whilst the Pope’s admission on the utility of condoms may seem hardly earth-shattering, it certainly indicates considerable progression from his stance of only five years ago, when he explicitly rejected the use of condoms as a method of preventing the transmission of HIV, instead promulgating chastity and fidelity.

Now, even here in the potentially controversial quarters of the Sex section (yes, my mother may still be reeling from hearing of my latest extra-curricular journalism exploit), we’re not scoffing at the promotion of these values – it was rather the very naive and dangerous dimension of Papal didacticism that has longed caused furore.

Even as late at last year, the Pope was still insisting that “the problem cannot be overcome by the distribution of prophylactics: on the contrary, they increase it”. In the face of HIV, he insisted upon the necessity of emphasising “the human dimension of sexuality” and “true friendship”.

The revolutionary nature of the latest Papal admission isn’t that he has shown a particularly liberated attitude to condoms. Indeed he’s insisted upon his concerted opposition to artificial contraception in most cases, and has only alluded to its disease prevention qualities when considering the positives of prophylactics. But his new stance does show a positive progression towards considering practicalities rather than just theories, which is one factor that has been consistently compromised through the history of organised religion’s attitude to sex.