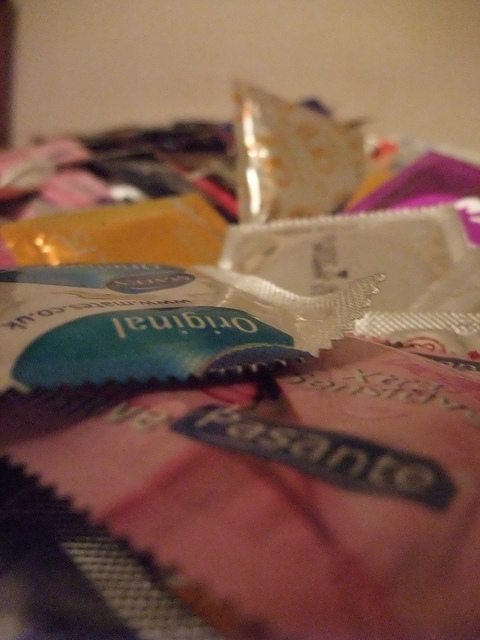 Could these become a common sight in adult films?

Despite the fact that past efforts to forge such a change have repeatedly stalled, City Councilman Bill Rosendahl has now insisted, “we can’t keep our heads in the sand any longer. These people should be using condoms. Period.” The city hopes to tie issuing its film permits to the use of condoms on the sets, as The New York Times reported earlier this week.

Whilst I’m not denying that most men (and women) out there are rightly concerned with relying on the rubber for a one night stand, or even a quick fling, in this day and age it seems to have become de rigueur to expect condoms to fly out the window quicker than you can say “Facebook relationship status”. And that’s not even counting all those who opt for a spot of unsheathed genital friction first and only belatedly turn to condoms for actual penetration. Essentially, condoms have come to be viewed as a necessary evil – but only a temporary one.

Now, I wouldn’t seek to condemn those who go about post-prophylactic sex in the safest way possible (i.e. both parties being tested, and then recourse to the Pill/implant/coil etc.) but that this has become THE NORM perhaps points towards more than a little pressure to conform to a standard that seems to have appeared from nowhere. Back in the good old days of Sex Ed and school uniforms, condoms seemed an exciting novelty and one it was a real mark of maturity to get to grips with. (Again, all-girls’ grammar school, so perhaps not the benchmark here).

Now everyone wants rid, even those who don’t quite know how. I’ve had many female friends bemoan the lack of contraceptive possibilities for women who suffer from, say, migraines and can’t risk any hormonal interference without some serious health consequences. Many have viewed their exclusion from the world of condom-free intercourse as a serious disruption to their love life. The fact is that the Pill has been reduced to a sexual fashion accessory, a supposed mark of liberation or trust in one’s partner – more of a case of when, than if – an attitude that precludes those out there who might not want to impose such artificial constraints upon their body.

Jim South, a talent scout for sex-industry performers said that “I tried many years ago to get everybody to go to condoms”, before he explaining that “quite a few companies did, but sales fell severely. The switch would be very difficult”. The fact is, safe sex has a bad rep.

In the airbrushed world of television and cinematic sex these concerns are easily elided – we’ll be given some soft-focus clips of naked bodies writhing, followed by a nice, clean aftershot of both parties lying beneath some rather strategically placed covers. There’s no sign of any used and discarded condom or body fluids to tarnish the anaesthetised vignette. Unless the scene is being played for laughs, it’s rare we’ll have to see our protagonists debating over which condom is the best to use or fumbling to put it on, either in the dark or in a state of mild inebriation.

Los Angeles’ law is going to be unpopular. It’s not going to succeed in imposing a blanket ban on condom-free sex scenes outside of the city limits, at least not in the near future. But by bringing all the past horror stories of STI-ridden sex starlets to the fore, it’s helped to remind us of just how dangerous the industry can be. And in a society where we seen to be keen to emulate exactly what we see on screen, the potential pitfalls of bumping uglies outside of the industry too.