The Vajazzle: a trim too far? 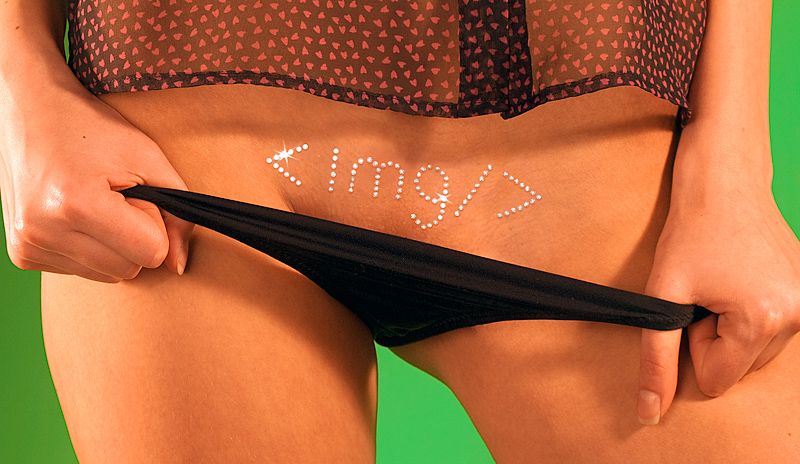 Are you having a “fat” day? Just been dumped? Having an existential crisis? Try a Vajazzle.

The “vajazzle” has been shimmying its way into our culture, and bedrooms, over the past few months. For the unenlightened amongst you, one can only presume that you have something better to do than watch The Only Way is Essex, though I can’t possibly imagine what. The new trend is to decorate one’s waxed, perfumed pubic mound and labia with Swarovski crystals, in a variety of approved girlie patterns. The actress Jennifer Love Hewitt first extolled the virtues of this trend on the grounds that it is “a great self-esteem boost after a break-up”. Is she onto something?

It’s true that many women do find personal fulfilment in their appearance. They really, truly like to apply lipstick and slip into a pair of high-heels and even have doctors cut off parts of their genitalia, if that’s what makes them feel sexy. I certainly don’t begrudge women who make the choice to perform the behaviours of femininity, and I perform many of them myself, on a daily basis. For now, the more extreme performances of femininity, like breast implants, vaginal “rejuvenation,” and Vajazzling aren’t considered the norm for women. I’m not going to be met with shock when I remove my knickers and reveal to my sex partner that I haven’t converted my pubic mound into a shiny disco ball. But, it also wouldn’t be out of the ordinary for him to be shocked that I’m not perfectly waxed.

However, I truly question whether sparkly genitals can cheer a woman up, let alone empower her. All of this is sold, at upwards of £50 per “treatment”, as a fun, pseudo-feminist “confidence boost”, as if what women really need to empower themselves is not education or work, but a vagina-first collision with a glitter canon. I understand the utility of a clit piercing, for example, on account of the stimulation, but sheer decoration, with no real purpose or residual pleasure, is somewhat baffling. You can’t attribute the Vajazzle to personal grooming, in the same way you could a Brazilian wax; there are no gains on hygienic grounds. Vajazzling has little to do with sex, so is it another example of the joyless motifs of corporate pornography penetrating mainstream culture?

The current cultural approach to grooming and pubic hair is an interesting one, and many attribute the current trend for baldness entirely to the prevalence of pornography. The practice of pubic hair removal can be dated back to 3,000 BC in India and Egypt, and according to Islam some pubic hair removal is considered to be hygienic and necessary for both sexes. During the renaissance period in Italy, men were often depicted with pubic hair; take the statue of David (1501–1504), sculpted by Michelangelo, for example. Women however, more often than not were shown without pubic hair; as in The Birth of Venus (1485), by Botticelli. Indeed, even Charles Darwin references the sexual significance of body hair:

“The absence of hair on the body is to a certain extent a secondary sexual character; for in all parts of the world women are less hairy than men. Therefore we may reasonably suspect that this is a character which has been gained through sexual selection.”

But what is it about body hair that makes us cringe? More specifically what is it about female pubic hair that frightens us so much? What makes us women feel the need to get rid of it, through often painful means such as shaving and waxing? Are the red bumps and ingrown hairs an even trade for a hairless crotch? I mean body hair is natural, isn’t it?

In the 21st century there’s great contradiction on the topic. Many argue strongly that pubic hair inhibits people from fully experiencing the pleasures of sexual acts, oral and genital. They claim hair gets in the way, and is less attractive. The television advertisements for intimate grooming products are particularly illuminating on this. In one, recently aired, a female runner passes three small bushes that go from unkempt to roundly trimmed. As a woman in a bikini walks pool-side past a potted plant, it goes from wild and ungroomed to a neat rectangular strip. Circular, triangular, rectangular, oval and square – “whatever your style” – as long as it’s not natural, according to this commercial, it would seem acceptable.

Pubic hair elimination is a small but itchy area of contention. Porn has, perhaps, introduced a new aesthetic, which has infiltrated mainstream culture. Is this because women are ashamed of their natural bodies, so unaccepting of things as they are that they will do anything at all, even if it’s degrading, to increase their sexual attractiveness? Surely a man who withholds his attention and affection according to a lady’s follicle count doesn’t deserve intimacy with a real-life woman anyway. Men do not feel the same pressure to groom to please women, at the expense of their own comfort, though of course there are some that do.

For women, however, there is a worry that if you are hairy, you are regarded as unclean, lazy, a witch or the most extreme kind of feminist in an era when any kind of feminist is regarded with deep suspicion. Can we be feminist and feminine? Can we tolerate a contradiction, acknowledging that the culture of hair removal is oppressive, absurd and possibly racist (Asian women being more susceptible to excessive dark face and body hair – see Shilpa Shetty and the facial bleach incident in Celebrity Big Brother) yet admit that we feel more comfortable without it? Day after day we rip it out, slash it off, dissolve and bleach it with harsh chemicals with a savagery that makes me uneasy. Why is every female body featured in porn virtually hair-free (with the exception of hair fetishist sites)? Images of sexually-available women, gay and straight, seem universally pre-pubescent, both in their thinness and their lack of body hair.