Sex on the Cobbles: Sexual Culture in the Digital Age 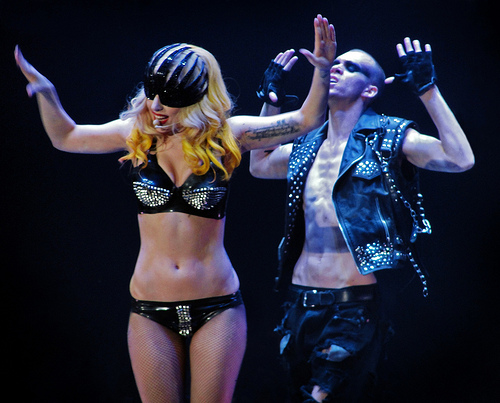 Camille Paglia, in a recent article for The Sunday Times Magazine headlined “Lady Gaga and the Death of Sex“, marked out Gaga as a milestone in sexual culture, and as representative of a downward turn from the sexual liberation of the 1960s into a kind of sexual oppression dominating the current cultural climate. Is sex in the twenty first-century as rocky as Paglia intimates? Can we really call sex dead – as a hyperbole or otherwise? And have we really become immunised to the kind of sexual taboos that our parents and grandparents had to overcome? if so this a bad thing? Pop culture seems to abound with the commercialised, commodified, and grotesque sexual icon that Gaga typifies, but has post-1960s-sexual-revolution pop-culture made sex asexual?

It used to take effort to access porn (the “adult shops”, their blacked out windows, and brown paper bags), getting hold of blue-movies took forethought and commitment. It’s not that I’m not congratulating those who went to the bother of shifty-looks and hiding-it-from-the-wife, but they had a hard time of it compared to the digital-generation. And it’s not just for the people who go looking for it online either. Even watching Channel 4 On Demand we can watch James the 26-year-old-virgin go to “virgin school” where we can not only observe his progress through the Aquarion course for inexperienced individuals, but we’re even shown the toe-quivering moment when James loses his virginity to his “tutor”. Add this to the list of social-gripes, from the possible legalisation of brothels, the existence of strip-clubs, the issue of STIs and contraception, abortion, paedophilia, underage pregnancy… What kind of “death” is this for sex? Surely the abundance of sex-related debates and discussions in the popular as well as academic and media forums suggests that twenty-first century is very much in touch with our sexuality. So surely this Capitalised “Sex” of Paglia’s is as alive as ever it has been?

But sex has always been a controversial issue. This seems to be particularly true for Britain over the course of the twentieth century: progressing from what we have come to regard as Victorian prudishness to the sexual revolution during the latter half of the 20th century: a period which it is easy to glamorise in terms of its liberal ideals. What Paglia, then, seems to be saying is that pop icons such as Lady Gaga have desecrated these liberties, parodying those icons, such as Madonna or David Bowie, who are the “real” icons of British popular culture. Gaga and her “type” in the twenty-first century are distorting their achievements, strangely and horribly, making sex an invasive, grotesque subject. So sex is dead. The sexual revolution has reached the extent of manufacturing over-sexualised personas in the popular world. As Camille Paglia in The Sunday Times asks:

Can it be that Lady Gaga represents the exhausted end of the sexual revolution? We may have reached the limit of an era.

Is this true for Durham? I hadn’t heard of “the walk of shame” before I came to university. Walking through town from an anonymous bedroom to your own room (fancy dress and all), knowing that these are your student days. You’re testing the waters. Seeing what’s out there. Children of the sexual revolution. But in Durham, there is still a tendency to be very “British” about it all, very embarrassed. And you know that you’ve got to try and get them out of your bed before the house mates notice who’s in there with you (and do you offer him/her breakfast??) and you know that you’ve got to call the GUM clinic to book an appointment… So how much good did the sexual revolution really do for British culture? and for us personally as students in Durham?

Paglia’s complaint, seems to be that our over-exposure to it has over-familiarised us with those “dirty” or unpleasant aspects of sex. Popular culture has become a sexualised culture as this lyric from Gaga’s “Bad Romance” demonstrates,

I want your psycho your vertical stick, Want you in my rear window, Baby, you’re sick

But in Durham, would we really admit the subtext? squeezing into that dress, getting ready for a night in Loveshack I want to be attractive and I don’t want to be alone and this is the only way I know how to get attention? Lady Gaga is not encouraging the hyper-sexualisation of popular culture. Yes, as Paglia shrewdly and rightly observes alongside photos of Gaga mimicking Bowie and Madonna, Gaga is a copy-cat. But she’s not a mirror-image. Take the photo of Gaga and Madonna with a hand between their own legs. Whereas Madonna’s eyes are shut in choreographed “ecstasy”, Gaga looks directly at us behind her fake eyelashes, numb to the very idea of herself, just as much as we growing up in the internet-age are becoming numb to the idea of these images as taboo.

Gaga is not trying to break all the rules of sexually repressive “Victorian” cultural ideals – that taboo has in many ways, already been broken. Gaga is a parody of a highly-sexualised pop-icon like Madonna. She is beginning to uncover the superficiality and commercialisation of sex within popular culture, rather than, as Paglia seems to suggest, a role model for it.

As Gaga’s meat-dress as modelled at the MTV Music Video Awards perhaps figuratively asserts: “I am more than the Mr Hyde alter-ego of sex; I am more than a piece of meat; sex should be about more than seeing yourself or someone else as a piece of meat”. Gaga is subversive, baffling the BBC News experts: “anti-fashion”? “a defiant feminist gesture”? (http://www.bbc.co.uk/news/magazine-11297832). The “Dr Jekyll” ego of sex is still lurking somewhere, and talking about sex can help clarify the different “ids” of this self-defining issue, and may help us tease out the aspects of sex which still retain that sexual-revolution glamour, and which we can use as a measure of social progress.

Not everything the internet has to offer on the issue of sex is there to offend or disgust us:

Everyone’s doing It. Even Hampshire WI’s Jean and Shirley did it whilst on a bed talking to a prostitute in Nevada, who was showing them her sex toys (http://www.channel4.com/programmes/a-wi-ladys-guide-to-brothels). They’re having the conversation. There’s a lot to say about sex, and the less we talk about it, the more it dominates the subtext of our lives. Sex will never be clear-cut. There’s making love, and there’s fucking; there’s tantric sex and orgasms, and there’s rape and abuse. It’s time in Durham that we had the silent, secret, embarrassing conversation.

It’s important that we can see both sides of the story that sex has to tell. Sex on the cobbles. Sex can be a rocky issue. Uncomfortable or for our pleasure, we can talk about it in Durham too.