It’s not as simple as a safe space.

No. This article is not going to storm the readers with the statistics of sexual violence rates in Durham. Neither is it going to celebrate the “efforts” that are being made by the University to reduce these rates. The prevalent hypocrisy and apathy about the severity of the issue and its bearing upon us rescinds our right to express horror at the scenario.  We cannot expect to reduce, much less to reveal, the real rates of sexual violence at Durham when we are not willing to merely lend a non-judgmental, unbiased ear to their survivors. We vouch to create safe spaces, whilst we speak the language of misogyny. 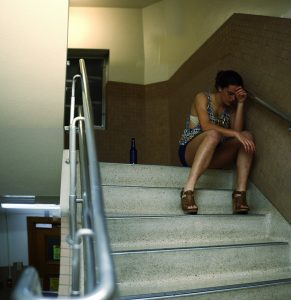 Perpetuating victim blaming: why are drunk women portrayed as dangerous?

The recent media attention that Durham has received for being one of the most unsafe universities of the country for women, has “shocked” the students, staff and locals alike. The reaction itself is quite surprising given that every day we bear witness to and are integrally a part of the micro and macro sexual offences that are committed around the city. The principal reason for this is that sexual violence is often treated as an isolated phenomenon. We fail to observe its signs rooted in our social systems and behaviours that promote and foster attitudes of misogyny, transphobia, homophobia and racism.

Coming to University has pushed every one of us into the social world of adults. We have experienced mingling at work, living together in colleges, going for clubbing together. Unfortunately, this independence is accompanied with the realisation that, being women, we have to be careful and conscious of the way we are perceived by others and present ourselves accordingly. Our social environment is saturated with casual rape jokes, homophobic jokes and statements, sexually offensive drinking games, racial abuse and discrimination, slut-shaming, and, most crucially, victim blaming. These attitudes are manifested in our routine conversations. Using social situations as an excuse to perpetrate sexual crimes has become a common practice. And yet, the defendants are being released without being convicted, with the argument that the victim’s accusations were based on a “regret which got out of hand.” A woman going to the lectures is expected to double-check the length of her skirt so as not to offend lecturers or fellow students. A woman is supposed to think twice before walking down the Bailey at 10:30 pm or bear the sight of some male university students masturbating publicly and announcing it wildly (yes, I speak from personal experience).

Women of colour and LGBT+a community are subjected to even more of such violation and humiliation. Casual racist statements like ‘You’re pretty for a _______ (Black/Indian/Chinese) girl’ are heard in multitudes across the city. But racial abuse in Durham can be a lot more severe, with people of colour being patronised, ostracised, and physically and verbally abused. This hostility faced by women of colour instils a sense of being an outsider and makes them hesitant to speak and express their feelings, opinions and experiences. In a space already occupied by misogyny, who would listen to the voice of a doubly-subjugated woman of colour?

The LGBT+a community is suffering similar issues of hostility and under representation. With most of the discussion around sexual violence and consent workshops being heteronormative, the sexual abuse of LGBT+a people remains out of consideration and their voices are silenced. Under the influence of homophobia and transphobia, sexual crimes against the LGBT+a community are still not recognised or centralised in discussions. More susceptible to mental health issues and social ostracism and marginalisation than any other group, sexual crimes are portrayals of discrimination, domination and hatred in their most violent aspect.

In recent sexual assault cases at Durham, most of the defendants have walked free and expressed their feelings about the ‘horrifying trial’ they had to go through. The experiences of assault victims are either silenced or go unheard. While a need for consent education and safe spaces is expressed and worked upon by the judicial system, the statements given by one of the defending lawyers seem to imply that consent is a way of educating men about the dangers of being near a drunk woman. The fair act of consensual sex is, yet again, used as a medium to promote these ideas of victim blaming and misogyny, through the bizarre notion of ‘dangerous drunk woman.’ The supposedly open space of the justice court has become a suffocating, insensitive political system of prolonged injustice. The university’s efforts to create safe spaces are well-meaning and commendable but these spaces remain inaccessible as the language of misogyny, racism and sexual discrimination continues to drown the voices of the survivors of sexual abuse and violence at Durham.