Gay marriage – I do? 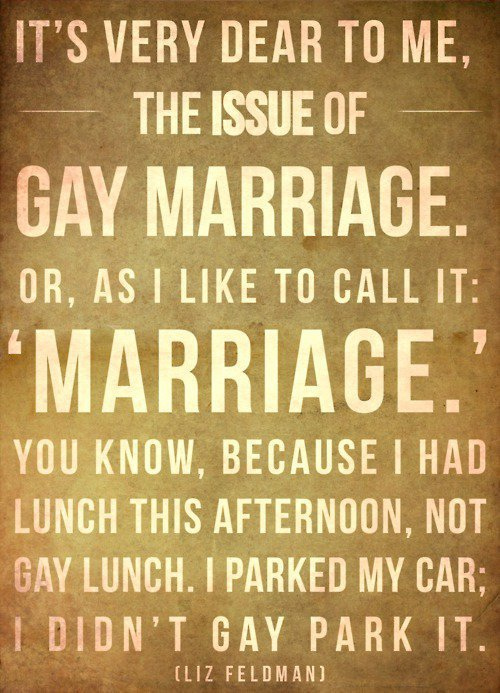 There’s no such thing as a little bit equal.

It’s the classic love story; A meets B, they fall in love, get married and live happily ever after. It’s a sequence that most people take for granted, but for gay couples throughout the country it remains simply a wishful story. Why? Because gay marriage is illegal in the UK.

The law responsible for this inequality stems from a case dating back to 1866, where marriage was defined as a “voluntary union for life of one man and one woman, to the exclusion of all others”. This seemingly homophobic definition seems out of place in modern-day Britain. After all, Britain is, on the whole, no longer the hostile and prejudiced society it once was. Homosexuality is now accepted by the majority of people and this recognition was formalised in the Equality Act (2010), making it illegal to discriminate against a person based on their sexual orientation. How strange it is then that marriage, the pinnacle of any loving relationship, remains out of reach for same-sex couples. The exclusion of gay couples from the institution of marriage seems to run counter to Britain’s strong belief in equality and the Equality Act’s intention of removing homophobic discrimination from 21st century Britain.

Currently, gay partners may enter into a civil partnership; an entirely separate union to marriage. Civil partnerships provide the same legal rights as marriages, regarding tax credits and pensions for example, but are a pale and second-class imitation of marriage rather than an equivalent. Gay couples do not just want the same rights as a married couple; they want to have the right to be a married couple. To deny them this right to marry implies that their relationships are inferior to heterosexual couplings and that they are unworthy of marriage.

It is due to this inequality that there are proposals to reform the law and legalise gay marriage in England, Wales and Scotland. The proposed changes to the law in England and Wales are to allow same-sex marriages in a civil (i.e. non-religious) ceremony and to allow couples already in a civil partnership to change this into a marriage if they wish. The proposed changes to the law in Scotland are to allow religious ceremonies for civil partnerships and to allow same-sex marriages. Public consultations about these proposed changes have taken place and we are now waiting for the governments’ responses. The government wishes to introduce the changes in England and Wales by 2015. The Scottish government announced on July 25th 2012 that gay marriage will be legalised in Scotland, from the beginning of 2015.

These proposals are not without opposition, however, with particularly vocal resistance from some in the Church of England and the Catholic Church. The reasons behind the Churches’ opposition to equal marriage are twofold: they view homosexuality as a sin; and they fear that allowing gay marriage will undermine their status. On the first point, some members of the Church simply will not be moved; for example, Cardinal Keith O’Brien of the Catholic Church in Scotland recently branded the very idea of homosexuality and thus gay marriage simply “grotesque”. The Church of England uses milder language but agrees with the same basic principle. The Church of England sees the purpose of marriage as to have children; something that gay couples are obviously incapable of doing. Both Churches fear that if gay marriage were legalised they would be forced to conduct such ceremonies. The second reason for the Church of England’s opposition seems rather self-centred. Currently, the Church is in the special position of being able to provide marriages to any adult in their parish. The proposed changes would mean losing this status, as they would not cater for gay couples who would marry elsewhere.

Despite the Churches’ noisy opposition to the change, legalising gay marriage has the support of most people and most organisations. All mainstream political parties support legalisation, as do most UK newspapers, with the only exceptions being the Daily Mail and The Telegraph. Most importantly, gay marriage has the backing of the majority of the public. A recent (June 2012) YouGov survey showed that 71% support legalisation, and this figure is increasing every year. It is also important to remember that the anti-gay marriage rhetoric being put out by the Church does not represent the views of all Christians. There are many church leaders, notably the Very Reverend Kelvin Holdsworth, who are in favour of gay marriage, and the Quakers have also expressed a desire to hold same-sex marriages. Many ordinary Christians are also feeling equally disenchanted with the prejudiced message being put out by their Church. MP Nick Herbert has criticised the Church of England of being “judgemental” and “intolerant” regarding homosexuality and gay marriage, saying that “I consider myself to be a Christian, and I’ve never in my life felt more distant from the Church than I do now”.

The arguments for gay marriage are wide-ranging and widely supported. First and foremost, there is the core belief in equality that is indicative of modern Britain, including that LGBT people are equal to heterosexual people and deserve the same rights, including the human right to marry. Legalising marriage for homosexual couples does not harm anyone and does not threaten the legitimacy of heterosexual marriages; both are based on love between two people who wish to spend the rest of lives together. To deny the right to marry to two willing adults is an unnecessary cruelty and humiliation. The belief that homosexuality is “grotesque” and unnatural has no valid basis as homosexuality is found in all human cultures and throughout the animal kingdom. A question for religious people opposed to gay marriage to consider is this: would a God of such love support such hatred?

Moving on, another key factor behind the Churches’ opposition to gay marriage is the fear that they will be forced to conduct such marriages against their will. These fears are unfounded, however, as the proposed laws make it clear that no religious leader will have to perform such ceremonies if they do not want to, nor will gay marriage ceremonies have any religious content. Whilst some Church leaders fear that same-sex marriages will threaten the future of the Church, it faces a much greater risk through alienating their own, largely tolerant, members if they continue their aggressive stance against gay marriage. This raises questions about religious influence in modern-day society. Although it is important that all faiths have the right to believe in what they want, they do not have the right to impose social injustice upon the country. Religious beliefs must not block progress and equality, even if this means that the Church loses its status as the chief provider of all marriages. To quote the Archbishop of Canterbury Dr. Rowan Williams, is it far from “the end of the world” if the Church lost this special status.

It now seems almost certain that gay marriage will be legalised by 2015, and most probably sooner. Such equality is long overdue. For years, homosexuals faced hatred and ridicule purely on the basis of whom they loved, and society has finally grown up and realised that it is homophobia, not homosexuality, that is “grotesque”. It is now time for true equality: equality of marriage.