Females fake it: Stephen Fry on why women hate sex 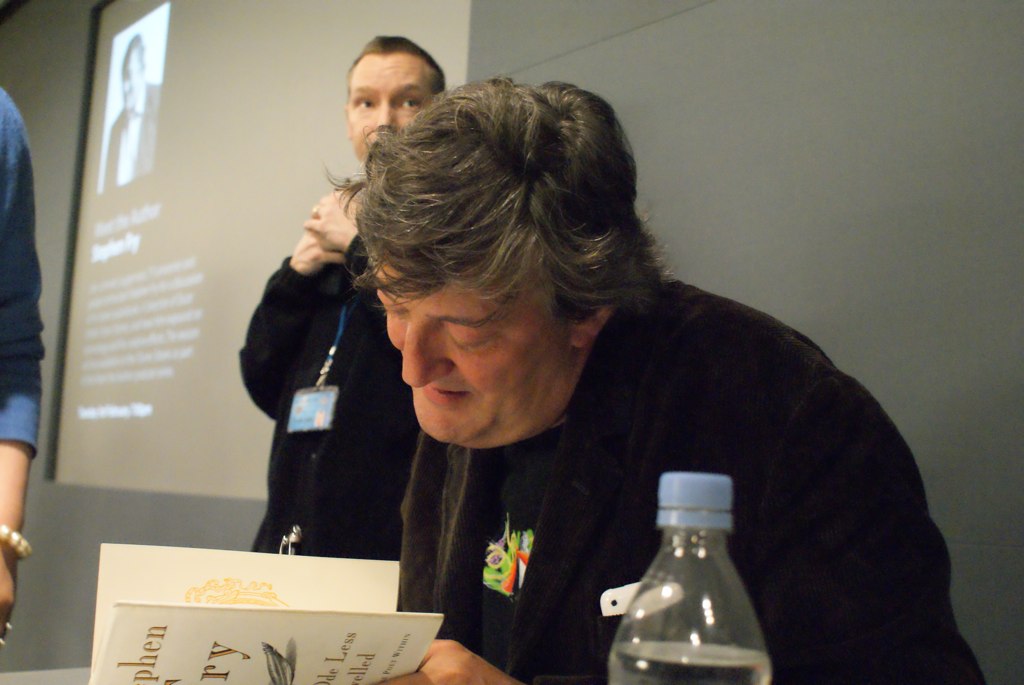 National treasure. Gay icon. “The cleverest man in Britain” according to some. Until last week you were hardly likely to free associate Stephen Fry with a curiously old-fashioned stance on sexuality. But after infamously announcing in the November issue of the UK’s leading gay lifestyle magazine, Attitude, that “the only reason” women will have sex with straight men is that it is “the price they are willing to pay for a relationship”, Fry’s usually benevolent reputation has been dealt a fairly hefty blow.

Fry began by reasoning that “if women liked sex as much as men, there would be straight cruising areas in the way there are gay cruising areas”; a curious point of contention given that the sexual practices he alludes to were throwbacks to the days when homosexuality was illegal.

More worrying was his apparent pity for hetero men, founded on his belief that they all harboured deep-rooted fears that “they disgust women” and “find it difficult to believe that women are as interested in sex as they are”.

Fry’s rather bizarre but oh-so “modern” response to the fiasco has been to threaten to… (drumroll) quit Twitter, whilst simultaneously protesting that he has been misquoted by an interview that was only ever intended to be “humorous” (Attitude have of course insisted upon their journalistic integrity in “faithfully and fairly” reproducing the seemingly serious comments Fry made during their interview).

Now I’m not about to rehash the arguments already made by famous feminists – safe to say that they cover all ends of the sexual spectrum – but it’s worth while repeating two of the leading ripostes. “Women are just as capable as men are of enjoying sex,” responded journalist Rosie Boycott, reasoning that the cruising was an unnecessary given women “have other ways to get our thrills”, namely on the mainstream club scene. Fry’s comments suspiciously seemed to elide the gay clubbing scene, in a definite suggestion he is talking somewhat retrospectively, when there was a significantly more cloak-and-dagger approach to homosexual scene.

Germaine Greer seemed to accept that it was “true that men have an interest in a kind of sex which women find infinitely depressing” under her belief that “what women yearn for is intimacy”.

Even from two of our supposed leading feminists, it disappointingly seems that female sexuality hasn’t moved on much from the virgin/ whore dichotomy of yesteryear. Either a woman only enjoys the intimacy of sex within a close, tender relationship or they’re so fiercely promiscuous that their taste for casual sex seems to elide the need for a man altogether (the rather appropriately named Boycott doesn’t make much mention of the other partner necessary for sexual encounters). Whilst I’m not suggesting that either of these approaches to sex are in themselves in any way abhorrent, the loaded language used by both Boycott and Greer is a little cause for concern.

Let’s start by bypassing Greer, namely because any Cosmo-girl will pin down her stance as old-fashioned and romanticised – neither of them necessarily bad qualities in themselves, but certainly a little antithetical to the modern sex scene.

Boycott’s version of events is certainly the more “trendy” but, in its way, is as problematical as Greer’s, especially in the way it is all-too frequently reproduced . When The Guardian describes Fry as infuriating those women who see the “ability to have unemotional, uncommitted sex as an empowered lifestyle choice”, it paints a picture of deluded automatons merely engaging in the act in order to win some sort of badge of honour from their fellow feminists; an image almost as disturbing as the one that Fry himself portrays.

The description seems to divorce the act from passion, reciprococity and any sort of enjoyment at all. Feminists, it seems to suggest, don’t actually enjoy doing the deed but routinely rack up the numbers to defend some almost inhuman stance on sexuality.

What is also troubling is the widespread media suggestion that only “feminists” are disgruntled by Fry’s comments. Whilst I infamously have no qualms placing myself somewhere in this femi-bracket, the media is only serving to fuel that niggling suspicion in the minds of some that only a minority of the female population believe in equal enjoyment when it comes to sex. It may be the famed feminists who are called upon to provide some kind of rejoinder, but surely most women would have cause for complaint in the way that Fry presents them – not merely as passionless, unsensual beings, but also ones desperate to secure a relationship with a man under false pretences.

The initial outcry also generally obscured the responses of men altogether, when I believe Fry’s comments are equally insulting to hetero males (and indeed any of the same-sex persuasion who don’t want to be tainted by association). Why should it be suggested that they unanimously take advantage of emotionally vulnerable women, manipulating them into sexual encounters that they are so unwilling to partake in?

The implication that men believe their sexual appetites disturb women may, admittedly, have some precedent (read any of the salacious stories from modern-day call girls and you’ll find many of the clients visit them rather than share their sexual interests with their long-term loved ones), but to tar all hetero-sex experiences with this rather dirty brush paints an unconvincing portrait of a population riddled with paranoia concerning even the most of vanilla of naked encounters.

Given this has emerged from the mouth of a man who himself claims to have been celibate for circa sixteen years due to an apparent disinclination to indulge in “rubbing the wet slimy bits” of his body against others, it may be unsurprising that many commentators say his off-colour remarks reveal more about his own attitudes than those of society.

So whilst the subsequent media storm may suggest we’re still a little lost when it comes to finding a home for female sexuality, that fact his thoughtless remarks have caused such a furore at least shows we recognise the flaws of our more prudish past. Britain’s famed restraint in the days of yore to approaching sexuality (of both the straight and same sex variety) may have left it’s rather nasty vestiges of paranoia and disgust in the minds of some but now it remains to be seen whether our hyper-awareness of defending female sexuality not only makes damaging generalisations but also obscures the most fundamental aspect of sex – that it takes two (at least) to tango.