In the days when ‘thick’ is the new ‘thin’, is thin privilege a thing of the past?

There always seems to be a new, right way to occupy space. Somewhat like our bodies, this is in a constant state of flux. Recently, the right answer to that age-old question ‘does my bum look big in this?’ has switched- thick is the new thin. Vogue declared cleavage ‘over’- maybe bums are the new boobs.

Truth be told, I don’t know the ins and outs of these body trends. The reason being I stopped listening. Because the evolution of how we should look is thoroughly outside the realm of how our bodies really shift- and not enough people realise this. I grew up seeing bodies like playdoh- something to be moulded and sliced with prods and squeezes. I used to look at the softness of my stomach and wonder why I couldn’t just shift it to the planes of my chest- where it would be welcomed. I used to sit down and see how my thighs grew wider, how my belly would split into little rolls. To me this felt so inherently wrong and unnatural. It took me years to realise I was taught this- that to the media bodies were like playdoh- with the swish of a mouse and a few clicks they could slice it and shift it and sell it. The right body is always glinting in the distance- but you will never achieve it. 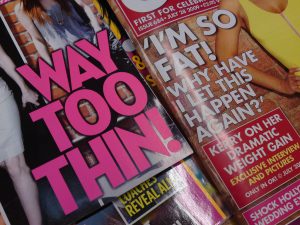 That’s really all body positivity is about- accepting yourself the way you are. And surely this is something which everyone could benefit from- regardless of size. When thin isn’t in anymore, are thin people just as aggrieved as fat in the face of media and societal expectations? In the face of body-shaming comments such as ‘real women have curves’ and ‘bones are for dogs’, can we really still use the term ‘thin privilege’?

Thin people can definitely suffer from low self-esteem and detrimental mentalities regarding their bodies, and nobody should try to erase or make light of that. I’ve seen thin friends be accused of being anorexic, and have their bodies commented on as if they weren’t their own, but some public property. But fundamentally, they could walk into any shop and see clothes designed for them to wear and feel great in- they’re represented on runways and by the models in Topshop. Television characters whose bodies don’t define their entire plotlines and personalities help to rectify any alienation they feel.

And fat people don’t have that.

Thin privilege still exists because having to justify your lifestyle or dietary habits isn’t normalised. For the most part, people’s first impression of you isn’t based on your size, harsh words not justified by concern for your health, which is presumed (and often incorrectly) to be poor. Compliments are not solely directed to your face, or followed by qualifiers such as ‘you look good, did you lose weight?’ Attraction to you isn’t fetishized, and your sexuality isn’t eradicated by or the brunt of comedy for films and television. You can eat in public without fear of judgement or comments from strangers. Simply put, society isn’t deeply embedded with a hatred of you, and the space you occupy. Loving yourself, or simply being yourself, isn’t a battleground you have to face every time you leave the house, or log onto social media.

Whilst some are more privileged than others, there are no winners in the face of modern beauty standards. If you’re interested in body positivity I would recommend looking at Megan Crabbe’s blog and instagram. This Buzzfeed introduction is also pretty good.