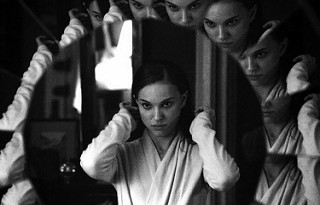 The chances are that you have seen, or at least heard of, the 2010 psychological horror film “Black Swan” directed by Darren Aronofsky.  A superficial take on the plotline would render a rather psychotic teenage girl who is obsessed with ballet dancing and goaded by her preying instructor into discovering her own sexuality.

Natalie Portman’s portrayal of protagonist Nina Sayers is commendable, so much so that she won the accolade of Best Actress at the 2010 Academy Awards.  I would argue, however, that Black Swan is much more than a shocking storyline and impressive acting; its incorporation of various allegories, intertexts and cultural references give it a wide scope for interpretation and analysis – in this case the perspective of a young girl who has mental issues, a controlling mother and an ultimately fatal obsession with perfection.

Firstly Aronofsky’s production addresses the socialisation of a young woman in a competitive, success-driven environment – this relates not only to the world of ballet depicted in the film, but also the current job market and commercial sphere.  Nina’s vulnerability, insecurity and constant comparison with her female peers are issues to which most girls growing up today will relate.  In this sense Black Swan becomes a microcosm of a capitalist world, with the over-competitive ballet dancers representing our dog-eat-dog mentality and selfish pursuit of success.

Given the recent Weinstein revelations, the almost predatory treatment Nina receives from her ballet teacher Thomas (Vincent Cassel) is more relevant than ever.  The French actor has a convincing, and rather intimidating “œil qui déshabille” – literally an eye which “undresses” the object of its gaze.  Thomas attempts to kiss Nina in his office, dances sensually with her in the studio and encourages her to “touch herself”.  Initially this seems to be some kind of sexual fantasy on Thomas’ part, but as the film progresses he becomes more of a father figure, nurturing Nina as she fledges into a more mature and assertive “Black Swan”.  The parallel with Freud’s Oedipus Complex is indisputable.

In fact, the film could be described as a “coming-of-age” psychodrama in which the protagonist overcomes parental control, gains mental and physical strength, and manages to realise her dreams (namely taking the lead role in Thomas’ adaptation of “Swan Lake”).  In her quest for freedom and independence Nina is inspired, or perhaps enticed, by rebellious fellow dancer Lily.  With her self-assured gaze and nonchalant attitude, Lily seems to corrupt the innocence of the “White Swan” in Nina, urging her to take ecstasy and intoxicate herself despite having rehearsals the next day.  The lesbian sex scene between the two reveals itself, however, to have been an illusion on Nina’s part.  From this point her transition towards sexual emancipation is evident; Nina’s later act of kissing Thomas following a performance epitomises her new-found agency.

This agency is also integral to the subplot concerning Nina’s relationship with her overprotective mother Erica (Barbara Hershey).  Erica’s care for her bulimia-suffering and self-harming daughter is incontestable; she encourages her to eat cake and even makes her wear protective gloves in bed.  Yet, more often than not, such protection turns into downright domination which culminates in the mother trying to lock Nina in her own room.  The toys in this bedroom, along with the tinkling music box, represent Erica’s constant attempts to infantilise her daughter.

Fortunately, Nina begins to rebel – she throws away her toys, locks her mother out and escapes from their suffocating home to see Lily.  Nonetheless, Nina’s fear of repercussions engenders a psychosis (Freud once again) which overrides her increasing independence – she panics blindly after masturbating on realising her mother is in the room.  The protagonist’s embarrassment, angst and shame characterise her relationship to her mother, whose excessive expectations as a failed career ballerina are, frankly, unattainable.  As with the previous themes, the idea of a mother with over-ambitious plans for her offspring is one that will resonate with viewers for generations to come.  Through the tragic dénouement of the narrative, the director warns us that “pushy parenting” can prove to be counter-productive, resulting in rebellion, conflict and, in extreme cases, a child’s demise.

SPOILER ALERT: Stop reading now if you wish to watch the film and discover the ending for yourself.

Nina dies dramatically at the end of the film, having reached ultimate perfection by successfully fulfilling her dual role as the White and Black Swan.  In terms of gender and sexuality, it is story of female empowerment, self-discovery and emancipation.  Nonetheless Aronofsky also deals with much darker affairs, namely obsession, psychosis and self-destruction (Nina thinks she has stabbed Lily for usurping her role, when in fact she has mutilated herself).  Perhaps “Black Swan” acts as a warning to young millennials growing up in a fast-paced and ruthless environment; those who mercilessly pursue their own goals at the expense of others are doomed to failure – whether it be mental illness, physical collapse or, in Nina’s case, both.  The fact that Nina maims herself with a fragment of a shattered mirror serves to reflect the fact that we cannot project our problems onto other people…Rather, the issues lie in our reflection, in how we see ourselves.

Despite the film’s moral astuteness and beautifully crafted techniques, I believe Aronofsky could go further in his portrayal of the plight of young women in the 21st century.  There may be the juxtaposition of a “White” and a “Black Swan”, but the film lacks racial diversity.  In fact, only 20 seconds of the speech acts in the film come from a person of colour.  If a director wishes to claim universality in his/her depiction of societal problems, he/she needs to ensure that the characters are representative of wider society.  Women of colour have contributed and continue to contribute to the world of ballet – and to the implied macrocosm of the professional world.  So why not represent them proportionally in film, TV and media?

Predominantly white films such as Aronofsky’s – of which there are countless even today – will only be able to fledge from cygnets into swans when their directors stop feathering their own (white) nests and start affording more actors/actresses of colour the opportunity to fully spread their wings.