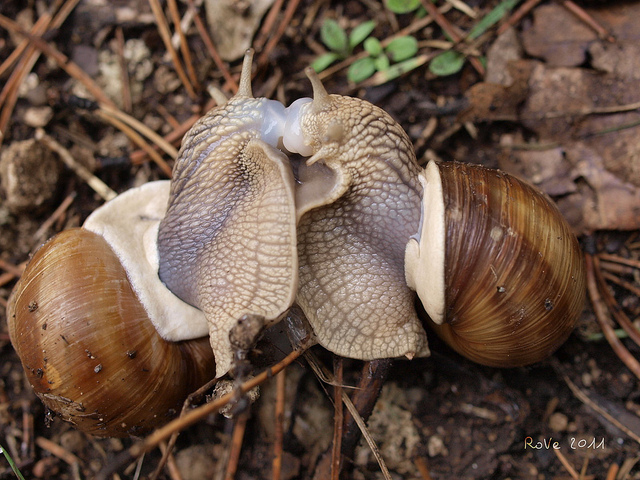 Cupid in the real world: the love-dart snail

You may think you’re kinky, but this is often nothing compared to what our friends in the animal kingdom get up to. Here we will look at some of the stranger sex habits that can be found in the wild. And just to warn you, it’s not pretty…

Before giraffes mate, a ritual known as the ‘Flehmen sequence’ takes place. This is when the male follows a potential female partner around, nudging against her until she urinates. The male then proceeds to DRINK a mouthful of the urine to determine whether the female is ready to mate. If the female is ready to mate, then the male will basically stalk the female while she runs away. The female will eventually relent if no better males decide to compete for her affection. Strangely, after a fight – known as a ‘necking battle’ – between males, they often end up having sex. It is thought that at least 75% of the time a male giraffe has sex it is with another male.

A species of frog found in the Amazon, known as the Rhinella proboscidea, has been found to use a ‘functional necrophilia strategy’. Yes, you did read that correctly. Researchers have found that the males will extract the eggs from dead females by ‘squeezing the sides of her belly with rhythmic movements of his front and hind limbs’. Although the idea of this is enough to make our stomachs turn, it actually gives an evolutionary advantage to the frogs in question. As the males often vastly outnumber the females, it gives males a better chance of being able to fertilise eggs.

Alpha female hyenas will provide their offspring with higher levels of the hormone androgen during pregnancy, which is a male sex hormone associated with aggression. This causes their genitals to grow in a massive way, with their clitoris protruding seven inches from their body. Unfortunately for the hyenas, their clitoris contains their birthing canal. “Imagine giving birth through a penis,” says Kay Holekamp, an author of a hyena study. As you might guess, this can be extremely painful and there is a high death rate for first-time mothers. Mating is also difficult which may be why male cubs start trying to mount females at just a few months old. Practice makes perfect!

Bees commit the dramatic act of sexual suicide when mating with the queen bee. The male bee, known as a drone, tries to mate with the queen in what can be seen as his sole purpose in life. A swarm of drones will fly around the queen until one decides to make a move. He will ejaculate immediately with such a force that the tip of his penis will explode and get left behind inside the queen. The drone will die soon after this. The queen doesn’t mourn this sacrifice for long, however, and will mate with around twelve other partners in one flight!

In some species of snail, they stab each other with ‘love-darts’ during foreplay. It is thought that these love-darts help the sperm to survive for longer and are therefore more likely to fertilise eggs. Snails are hermaphrodites, and both partners have plenty of time to try and stab each in their two to six hour long mating sessions. The darts work like a syringe and are thought to double a snail’s chance of reproducing. It is even thought that the love-dart snails may have influenced the Cupid myth, as the ancient Greeks are thought to have known of them.

Bonobos are one of our closest relatives, and like us, use sex for more than just reproduction. They have a range of sexual activities, unlike other animals, which includes oral sex, mouth-to-mouth kissing and penis-fencing between two males. Bonobos are known for being promiscuous, with the reasons behind this being social and political. Bonobo sex can be used for bonding, reconciliation, tension relief and pleasure, amongst other benefits. They often show bi-sexual behaviour which is thought to act as a social lubricant for making friends. A study has shown that bonobos make louder noises during sex when they are with high-ranking partners, which shows the political motivation behind their sexual activities. As bonobos also use sex as a means to solve disputes, maybe we should take a leaf out of their book and make love, not war.