Will you promise me something? I would like to ask this of you as my esteemed reader. It really is a very humble request. Promise me you won’t stop reading when I tell you where I went this weekend. Please. Not for my sake, certainly not. That would be too cheeky and (if I’m being frank) quite needy. No, I ask for the sake of the city that has been done an injustice ever since the German bombers made a beeline for it in 1940.

Yes? OK, then, I’ll tell you. You see, this weekend, I went to Coventry.

Don’t go away now! You promised not to stop reading; don’t do Coventry a further injustice!

Good. You’re still here. Now, before you ask, let me tell you why we decided to go there.

I had wanted to go on a nice mid-term break in the countryside with my family. The Yorkshire Dales, perhaps. Find a cosy cottage with a fire, escape civilisation for a couple of days… It was not to be. While that may have suited me, coming from Durham, my parents would have had to slog up the motorway all the way from Devon; and flight connections to the remote northern moors from Belfast, where Tom is studying, left something to be desired.

Coventry, on the other hand, happened to be slap bang in the middle.

It doesn’t really matter where you go, does it? It’s more about who you go with. That’s what I told myself, in any case, when I was asked on multiple occasions, ‘Why ever are you going there?’

And so it was that, on Saturday morning after a dreadful night’s sleep in a dreadfully impersonal hotel room, I woke up in Coventry.

We trudged through the grey streets, getting progressively colder and wetter and (it has to be said) hungrier hangrier with each doubtful step.

Things improved after breakfast. By this time, we were in the city centre. We hurried through the remains of the old cathedral (destroyed during the Second World War and somewhat exposed to the elements) and went into the new cathedral.

It was splendid. Words just won’t do it justice. It wasn’t traditional in the slightest: we didn’t walk over any dead people, and there weren’t any hideous gargoyles grimacing down at us. Instead, it was light and full of symbolism dedicated to peace and reconciliation. The clear glass windows with pale silhouettes of angels looked out on one side onto the old cathedral ruins and, on the other side, threw light onto a tapestry of Jesus.

During the Second World War, Coventry was heavily bombed and the cathedral was among the many victims. Instead of restoring it, it was decided to leave standing what was left and to build a new cathedral next to it, in memory of the huge losses suffered.

We attended a short service in a side-chapel and shared bread and wine with the two other members of the congregation. The vicar, Peter, wearing a white gown and a beautiful green sash, was delighted to see us. He approached us afterwards and asked if we were visiting. ‘I studied at Durham!’ he said, beaming, when I told him where I was from.

‘I would ask you all to join me for lunch,’ he said, ‘but this is your family time. Make sure you go the Rising Café, though; they do an excellent lunch – although they do get very busy. And have you heard there’s a fashion show on in the cathedral tonight? All the clothes are from charity shops!’

He bid us goodbye, before reappearing a few minutes later in jeans and a t-shirt to fervently recommend the transport museum.

By the time we emerged, the rain had eased off, and we wandered around the remains of the old cathedral. When it had been bombed, two charred roof-beams had fallen in the shape of a cross, and a stonemason had bound them together and inscribed the words, ‘Father forgive’ in the stone behind it. This initial gesture of love and hope now stood where the altar used to be at one end of the formerly magnificent building. At the other end, there was a statue entitled ‘Reconciliation’ of a man and woman on their knees, embracing.

The cathedral wasn’t the only thing worth seeing in Coventry. The Rising Café lived up to its reputation; and a street of medieval buildings had been beautifully preserved, housing, among other undoubtedly fine establishments, a charming Indian restaurant, a very agreeable Mexican restaurant and a wine bar with an Arthurian round table. And have you heard of Lady Godiva? She rode around the city naked some thousand years ago and her statue stands proudly in one of the shopping precincts.

The city may have risen from the ashes, but its continuing peace and reconciliation work is still not widely appreciated. I was not the first, nor will I be the last, to whom it extended its welcoming wings – perhaps even you, O esteemed and promise-keeping reader, will be inspired to make a visit… 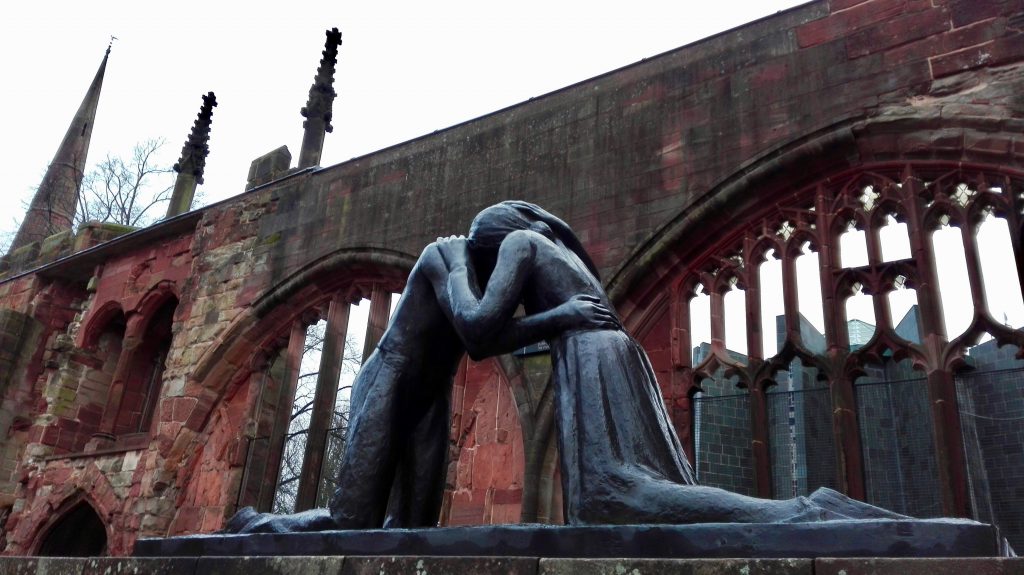