The Rise of the Tomb Raider vs Uncharted 4 (a review)

Michaela Atanassova in Gaming on 10 November, 2016. 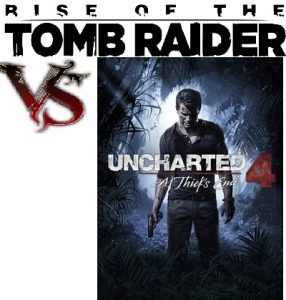 For 2016 action-adventure field was dominated mostly by the debate about the two most popular Indiana Jones-like characters: Lara Croft and Nathan Drake. Uncharted received its satisfying end to the franchise in May 2016 by giving Nathan something more important than treasure hunting and a reason to settle down. While The Rise of the Tomb Raider firstly came out in November 2015 for Xbox, it was released two more times in 2016 for PC (January) and PS4(October). As a sequel its end gave more question than answers about Lara’s father and it confirmed the intention of Crystal Dynamics for a third game. However, the rivalry between our two favorite characters will move to the big screen as a new Tomb Raider movie is set to come out in 2018 with Alicia Vikander and Uncharted’s movie director Shawn Levy disclosed shooting can start in 2017. I am sure fans of both franchises have waited for too long to see Lara Croft back on the big screen and Nathan Drake’s ruggedly handsome attitude will charm away most of her adventure fans with his humor.

As a story setting the two games offer historical environments engulfed in mystery and eventually solved and unveiled its secrets. In the adventure genre the story follows the somewhat popular formula where the main character is looking for a forgotten place which usually has either a sort of artefact or treasure causing rivalry people and even friends to slaughter each other. The main protagonist through hardships perseveres and brings balance by eliminating the threat which is either a villain or the knowledge of the place/artefact that would draw other power-hungry villains in place. In Rise of the Tomb Raider the developers chose to burden Lara with more questions about the nature of her father and bringing into play a rogue organization Trinity which is not only interested in divine artefacts but also in Lara’s family tree and her life. Uncharted 4 also uses some conspiracy theories not about an artefact giving immortality but in typical Indiana Jones style the hunt for treasure. Nathan Drake has no choice but to help his brother find Libertalia – a utopian pirate island which had been hiding’s place for pirates’ society and a vault for their gold, gems and valuables. Lara Croft uses her connections to go to Syria and Siberia in a matter of a week to find the lost city of Kitezh which sunk under a lake during the invasion of the Mongols in 12th century. Both characters are faced with betrayal and not that great losses in order to bring order in the chaos of battle for power. While Nathan lightens up the mood in the game with his constant jokes and playing videogames with Elena, Lara meets the immortal Prophet and helps him in a serious fight with Trinity.

When it comes to gameplay the games never disappoint as they show us beautiful serene places which after a short while are either damaged in some way by a fight or challenge players with puzzles and fancy mechanisms to climb on. Well, the damaging part of temples and ancient artefacts is quite the opposite of real life archeology but when in danger thinking does not matter as long as it is amusing to win the fight. In ROTR Crystal Dynamics continues with the semi-open world in which Lara is more experienced survivor. She has more moves to offer as she has become more deadly since the previous game. Crafting involves smoke bombs, bombs, Molotov coctails, and enhanced ammo which give bonuses when used on multiple enemies. I personally prefer to go for the headshots. It is more disastrous than the previous as you can choose to experience all parts of it by becoming Terminator-like killing machine or to take your patience and stealthily go for the kill. Uncharted 4 has the habit of cornering your character with mercenaries and leave you outnumbered. The enemies are a little more intelligent as they away know where you are but there is no need to worry as Nathan is moves more smoothly and is easier to control. It takes you in playgrounds where you can either shoot your way out or stealthily eliminate opponents and continue with the story. At least Nate can turn and shoot while Lara can only shoot when looking forward, even though both of them feel very fluid when playing.

The storytelling of the games is a little predicable but the beautiful vistas and mystery around the places preserves the romantic adventure spirit of Indiana Jones. In Uncharted 4 the combat is quite repetitive and after you finish you there is not much but the multiplayer where you can play as the other characters in either a deathmatch, capture point (plunder). In Rise of the Tomb Raider there is also some kind of multiplayer where you compete with accomplishing challenges and competing with other. After the finale there are a couple of DLCs which offer more tombs and five-hour of story. Overall, the games offer an immersive experience as they potently build the enigmatic places whose secrets are unraveled and their play with history gives an entertaining setting. Naughty Dog has created a character which resembles Prince of Persia 2007 with his charisma and sarcasm who is a bit of a troublemaker. Crystal Dynamics, on the other hand. continue to build on the established legend of Lara Croft and her archaeological conquests of tombs, findings of divine artefacts and battles with villains with god-like powers. It is an open secret that the games in this genre exchange ideas in terms of gameplay as the reboot of Tomb Raider modified its own based on the image of the first Uncharted games.  No matter the origins of the gameplay and characters or the debate about who copied who, it is refreshing to see games which offer decent action adventure by keeping the dynamic environment alive and by having actual character development.