All screenshots, photos and the featured image were taken by me.

I bought my PlayStation Vita in August 2019, my very first non-Nintendo handheld. I was about to finish Persona 5, a game I had absolutely loved from start to finish, and to fill the Persona-shaped gap that would soon be left, I decided to play the Vita exclusive Persona 4 Golden, the enhanced remake of the PlayStation 2 game, Persona 4, released in 2012. That game was basically the main reason I bought the Vita, since I knew very little about the console’s other games. (Plus, this 90 hours-plus game would mean I would be getting more than my money’s worth even if I never played another game on it). 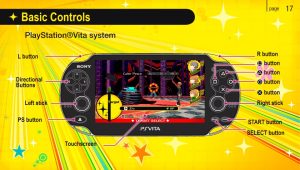 A page from P4G’s instruction manual, as viewed on the Vita

In my first few days of Vita ownership, I did a bit of research, and discovered that the brand was all but dead. Production had ceased earlier that year, giving the console a lifespan of eight years. Furthermore, I found that after a successful first year, sales almost stopped and it was largely abandoned by Sony in its final years. But why was that?

To understand what happened – ultimately, why the Vita failed – it would make a lot of sense to consider Sony’s handheld history, and what Sony was up against. Sony has only ever made two handheld consoles: the other one was the predecessor to the Vita, the PlayStation Portable, a competitor to Nintendo’s DS released in 2005. The PSP was very successful, with a lifespan of ten years: people liked how stylish it looked (at least, compared to the hulking behemoth that was the first iteration of the Nintendo DS), its large screen, and its Universal Media Disc format, which was utilised not only for games but also for other media, such as films and TV shows, allowing it to become a bit of a multimedia machine. There were a few poorly thought-through redesigns (looking at you, PSP Go) but the PSP was far from a failure. Despite the high price when it was released in the UK, it actually had a more successful first day of sales than the DS had had a few months prior. Though it eventually ended up being outsold by the DS, it seemed initially that it was a serious threat to Nintendo’s iron grip on the handheld market, and was certainly a worthy competitor. 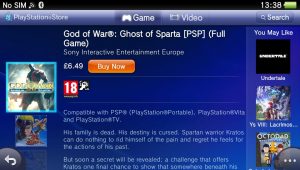 An example of a PSP game available on the Vita

Six years later and the successors to the DS and PSP were on their way to being released. Of course, things were different in 2011/2012 than they were in 2005. Mobile gaming was the next big thing, whereas in 2005 your options were far more limited if you wanted a game in the palm of your hand, since mobiles were obviously far less capable back then. I wouldn’t argue that mobile games and games made for handheld consoles are in the same category by any stretch, largely because mobile games are usually just aimed at short bursts of play – high-score style games and puzzle games, on the whole, because anything more than that will drain your battery faster than you can say Crossy Road. Mobile games are made for when you’re bored in a waiting room or at lunchtime at school – handheld console games are, more generally, designed for longer play sessions and have far more content (due to, you know, costing money). However, to me, it seems that for a handheld console to do well in this time, it had to have something that mobiles, and mobile games, couldn’t do. 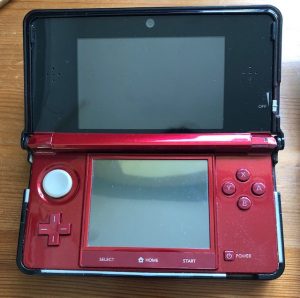 The original model of the 3DS

So, the Nintendo 3DS had a moderately successful launch, though still not quite as good as originally hoped: despite this, initial shipments sold out in Japan, and strong UK sales meant Nintendo saw their best hardware launch in the UK ever. The price was cut by a third a few months later, a fantastic move that meant sales sky-rocketed. The main selling point – as is probably obvious – was the 3D visuals, adjustable with a slider to the right of the top screen. It was also backwards compatible with the DS, with the cartridge slot accepting both DS and 3DS games. In fact, both the DS and PSP had gimmicks of their own – the DS had two screens, one of which was touch sensitive, and again was backwards compatible (this time with the GameBoy Advance); aside from all the fancy features I’ve mentioned previously, the PSP was Sony’s first handheld and for that reason alone probably piqued everyone’s interest enough.

The original model of the PS Vita

Now the Vita… didn’t really have anything like that. It looked incredibly similar to the PSP, except with the addition of analogue sticks as well as a d-pad (whereas though the 3DS kept the DS’s form factor too, it had the 3D gimmick). Despite the fact that it had a good first year, things went south after that point, and I think there were several reasons for that.

The first was that its focus was a bit confused – it was, according to Sony Computer Entertainment’s CEO Kazuo Hirai, aimed at both potential fans of mobile games, and those who wanted a dedicated games console. The second, largely coming off the back of that issue, is that it ended up cutting off half its intended market with its high launch price (the 3G/WiFi model cost £279.99 in Europe) – what casual fan of mobile gaming was going to buy an expensive, dedicated handheld? Backwards compatibility was also an issue – though PSP games were available on the PlayStation store, they had to be bought and downloaded even if you owned the physical copy for the PSP, because the Vita lacked a UMD drive. Another major problem was that the Vita used expensive proprietary memory cards to store digital downloads, not SD cards like the 3DS, driving up the price even more.

The issue with the Vita seemed to be how expensive everything ended up being, and even though the Vita (and its memory cards) also received a price cut in 2013, about a year and a half after its European launch, it wasn’t enough to make the console more appealing than the 3DS.

Next week, I’ll discuss the merits of the PS Vita, and sum up the reasons for the Vita’s failure – as well as ways in which things could have been different.