Super Mario run marks the start of a new chapter for Nintendo. Last year Nintendo marked the beginning of this new chapter by their release of the smart phone app Miitomo – the first Nintendo game to not be released on a Nintendo platform. This year then saw Pokémon – what has been an exclusive Nintendo product – come to phones everywhere in the form of the vastly popular Pokémon Go. It was only a matter of time until everyone’s favourite plumber would come to mobile and now he’s here in Super Mario Run for Apple devices at this moment. So, is it any good? 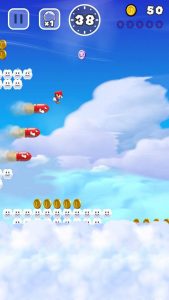 Super Mario Run plays almost like any other Mario game. You run sideways across the screen, stomping on monsters and running to the finishing flag. This iteration, however, strips Mario down to its even more basic elements by taking away most of the parameters of control. Mario automatically runs whilst you control his jumps by single presses on the screen. The longer you hold down; the higher Mario will jump: simple as that.

The game is split into three modes: World Tour, Rally, and a little kingdom builder. This could make the game more interesting but I personally am mostly only interested in the world tour.

The World Tour plays out like a regular game of Mario. Princess peach is stolen by Bowser at the start and you go through a number of worlds with a boss at the end of each. This is where I found my first issue with the game, in that it didn’t seem long enough. There are only 6 worlds in total and each world only has four levels each and after finishing these in less than an hour I felt a bit disappointed.

This tied into the fact that the art style is exactly the same which the 2D Mario games have been using for the past ten years along with what I presume is the same music. I wasn’t expecting anything radically different but this coupled with the small amount of levels made it seem all the more style. Familiarity is something that Nintendo were going for, I know, but just a remix of some of the songs or something a bit different could have served it well.

Where world tour really shines however is the star coin challenges on each level. For each level you can collect 5 star coins as a challenge and if you collect them all you can re-play the level with a new colour star coin which is harder to collect. Once you get to the black coin level this can get pretty challenging, having to pull off difficult stunts to collect all five coins. After I started sinking my teeth into these challenges I started enjoying the game a lot more and I started to realise how difficult it actually is to master the one click controls.

The second game mode, Rally, pits you against other players from around the world to gain Toads to populate your kingdom or lose them if you don’t win. In this mode whoever is the most stylish in their running wins. You earn points for collecting coins, pulling of impressive jumps and collecting the It does add in a competitive element to the game though which is cool for being able to challenge your friends and going up against other players if you want to test yourself. 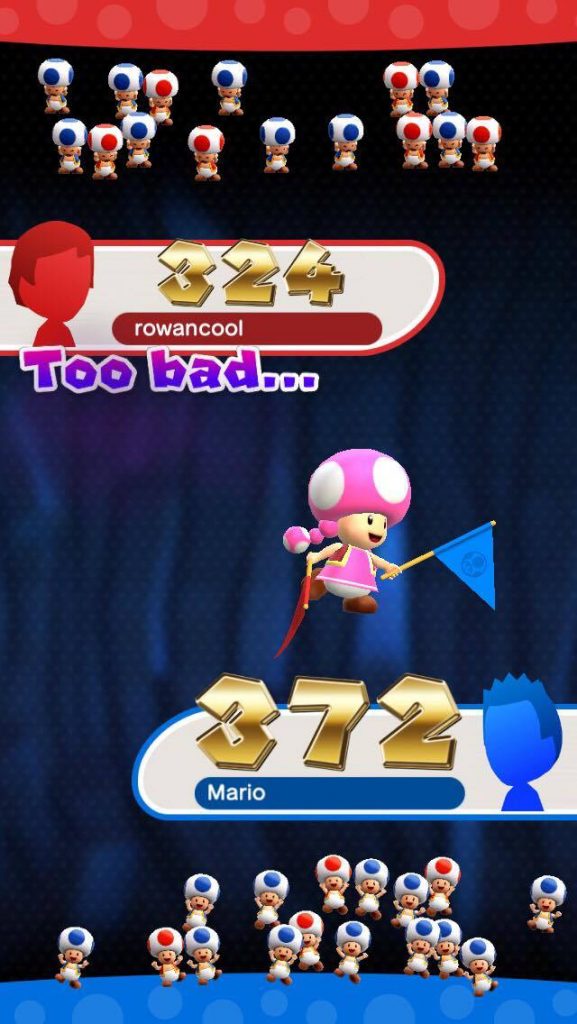 If you do really like this mode, there is a caveat in that you have to spend “Toad Tickets” to play it. You get a number of these tokens when you purchase the full game but the rest you earn through beating each stage and completing coin challenges. I think it would be hard to run out of Toad Tickets but it is something which could be a drawback.

The Toads you earn in this game mode are used to populate your kingdom in the kingdom builder. This is pretty much what you think it would be: you buy items to place in the Kingdom creating your own little version of Mario’s world. You buy items through collecting coins in the levels, so to collect more coins you have to play each level a few times.

One of the more interesting parts of the kingdom builder is the mushroom houses which you can unlock by earning different coloured Toads from Rally.  These allow you to play short mini games allowing you to collect more coins and a possible Toad Ticket. The only problem with these is that you have to wait a set amount of time before reusing them which makes it seem more like a mobile game than just a Mario game. 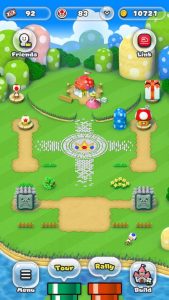 Despite the fact that it is fun to play these levels I do think there is too large an emphasis on repetition where, as I have said, Nintendo could have spent more time making more levels to play. To get the most out of Toad Rally and kingdom builder you have to be replaying the small amount of levels quite a lot. This, I think, could get repetitive quickly.

When I found that Super Mario Run would be a pay once game, rather than suffering from the micro transactions that plague most mobile games, I felt quite pleased. Nintendo wasn’t going to be pulling any scummy consumer unfriendly tricks. But then something else came up which I believe makes what is quite a sweet game, turn rather sour.

Due to trying to prevent piracy of this game Nintendo have made it so that you have to be online all of the time when you are playing it. While I understand the intentions behind this move and also the fact that internet is extremely widely available wherever you are, I think that this was a misjudgement on Nintendo’s part. Games like this should be able to be played anywhere regardless of your connection, because this is the nature of portable games, that you can play them to pass time. I do think that this has created more problems than it has solved.

To conclude, Super Mario Run is a solid platformer which has a lot of replay value despite the low level count. The different modes all tie together nicely but the issue of having to be online detracts from the game as a whole. It is a good game but it didn’t have any of the innovation which I was anticipating. The only significant separation it has from its predecessors is that it is on mobile and uses one control, which I don’t think is enough

Overall I give this game a 7/10 – A solid game-play experience as expected, but lacking in some areas.