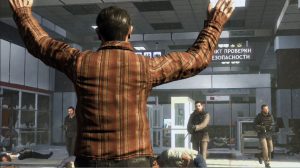 free for commercial use

SJW is a label applied to activists who spend debating long hours against others about social issues such as identity politics, social injustices, political correctness. Term is used negatively and describes heated discussions as “rants”. Unfortunately, the term dismisses important conversations from both sides of the argument and it just exacerbates the situation without offering any conclusion. Thus, it evolves from a debate to more dangerous actions and eventually scandalous escalations like Gamergate in 2014.

How has it become involved in gaming? Recently games have touched upon social issues in order to make their storylines more immersive by involving more diverse characters with controversial features or involve scenes where you can play as a terrorist. The reaction it provoked in social justice activists within the press was focused on issues such race, gender, violence. Their urge was to tackle those social issues in games as they are perceived inappropriate for social education of young people by stating heated debates in the media. The question I would focus in this article is whether social issues should be present in video games. In my opinion, the term SJW is detrimental to gaming as a whole and it should not be used because it diminishes the importance of discussions and it turns them into quarrels. On the whole, the impact on game developers and games is evident since the start of the industry as they have been self- censoring content. However, recently gamers have become outraged because developers have started changing game content in a way that it endorses ways to tackle social issues that was previously offered by social activists. For example, making female characters more numerous and less engaging visually in order to solve the problem of sexism or involve more LGBT characters to prevent discrimination accusations.

Some gamers have stated firmly that a game article should be purely about the game mechanics, gameplay and performance. It would mean game content should not be debated and developers should not focus on making it intricate and thought provoking as a movie. There is nothing wrong with indie games which lack storylines like Super Mario Bros because its main purpose is gameplay focused but games like Destiny, For Honor which incorporate role-playing elements are supposed to build an inspiring world even if it’s only for multiplayer. There is everything for anyone and consumers choose what to play based on preferences but the press activists should debate effectively according to the type of game. It would be inappropriate to discuss controversial plot changes for Super Mario by involving gender politics and saying that the princess baking a cake it is sexist. Personally, I like cooking and I don’t find it sexist and gamers are not interested in those elements of a game because the trivial detail doesn’t influence the decision of buying it.

As the industry evolves it is aiming to create more immersive worlds for gamers by offering more layered characters in complex plots. The part of the industry which is plot-focused includes social issues with the view to relate to people with more and more various backgrounds.  The problem is that it challenges beliefs of different people and social justice activists find those challenges outrageous or discriminative to minorities. For example, the infamous scene from Call of Duty Modern Warfare 2 where you play a terrorist in the opening mission was heavily criticized and even banned from some countries because of the violence. When I was playing through it made me aware of the horrors of war and it can serve as a guide for people of how to protect themselves by being perceptive of their environment. Another example is the low risk portrayal of LGBT characters in games by user choice like in Dragon Age and Mass Effect where the player can choose to engage in same sex romances. However, the LGBT audience and social justice activists prefer it to be normalized rather than seeing it as a special occurrence. It is problematic because gamers are not interested in the sexual orientation of characters as it is a detail that doesn’t contribute to the overall gaming experience and the more it is used the more it becomes conspicuously annoying. Games should be socially conscious but there are boundaries to the extent such content is presentable to children.

To conclude, games should include social issues in the relevant genre that appeals to people who consume it. The general controversy around the social justice activists and games is that developers make changes to games in order to please the particular community. Like Capcom making the female characters’ animations of Street Fighter 5 less sexually objectified after heated debates on the media – meaning self-censoring a feature of a game which is perceived as normal and has become a standard for the genre. It is unusual because games like Mortal Kombat have the same controversies surrounding them, survived several court cases in the 1990s and still involve gruesome fatalities in their latest addition because it is expected by consumers. Other games have relaxed difficulty of gameplay like Prince of Persia 2008 where the player cannot die because is constantly being saved by Elika or the original Assassin’s Creed where the combat was repetitive and continuous to be in the following. No matter the details, if a game is to make players socially conscious it should have the freedom to do it in its own way by not involving others’ political messages. The gaming industry has become multi-million dollar sports one and a powerful medium which has influence over a global community. The ‘golden age’ has passed when games were just about games because the gaming experience in most genres has evolved dramatically. Nowadays, those genres have begun to resemble the influence of books and movies in order to be more exciting and entertaining. They can either create socially conscious individuals and facilitate personal growth and build better equipped society. Or create social frictions that can escalate into scandals like Gamergate and damage greatly relationships between different communities in a society and society itself. Fortunately, the ways social issues are resolved can be limitless but the outcomes depend on consumers and their choice of what is perceived as normal. Games can contribute to society by raising social issues but it is controversial if they should offer any solutions because consumers need to know all sides of an argument in order to make an unbiased rational choice. Bias and lack of effective discussions can create chaos by exacerbating relationships ( between consumers and producers, between minority and majority groups, etc), thus games’ trends mirror social issues that are prevalent in society and that need to be addressed.