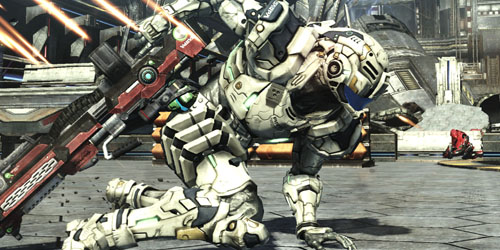 The star of the show is certainly the suit itself.

For those who aren’t acquainted with the “talents” of game producer/director Shinji Mikami, he is most famously known for the revolutionary third-person horror shooter Resident Evil 4. Whilst Capcom’s series had already been revered for holding the perfect line between camp and terrifying, it was Mikami’s entry, through changing perspectives and replacing ridiculous with awesome, that managed to bring it to the mainstream. Balancing this however is a very bizarre streak that precedes him almost as much as Resi 4; his most recent effort Shadows of the Damned for example, takes lewd and gross-out humour to new depths. But it is his sci-fi shooter Vanquish that I’d like to assess here, partly because it can be picked up very cheaply now, but mostly because it stays just about on the right side of insane.

Japanese developer Platinum Games take the helm, fresh off their success with the tempuras Bayonetta. Vanquish introduces us to protagonist Sam Gideon along with gruff Lt Burns as they lead an expedition across a populated space station to destroy a Russian invasion brought about by technological jealousy and other convoluted plot points. The story does nothing more than give little contextual weight to why Sam is in an epic, robotically enhanced super suit and so is his nemesis. The bits in between are either brilliantly choreographed battle scenes, or incredibly cheesy, not-worth-the-time expositional dialogues. The latter are by distance the worst part of the game with characters taking cliché to a different level of terrible. To focus on this blemish however is to miss the point of Vanquish, as between the cut-scenes is some of the most fluid and addicting gameplay you will ever experience.

The aim of this game is to push Sam’s crazy suit to its limits – and its limits are crazy. Not only does it equip Sam with a morphing weapon system to kit him out with all military standards but it also allows him to slide across the floor propelled by mini jet engines, shooting seven shades of the proverbial out of his robotic enemies. His weaponry can be upgraded by collecting glowing cubes and weapons of which you already have full ammunition. It’s a temporal and un-engaging system, especially as the guns degrade slightly when you die and never change in appearance however the hatred fades away instantaneously when you start using the Matrix-esque bullet time abilities. If Sam is in cover and an enemy starts to charge, he can leap over the obstacle and into the air for a second. If you hit aim whilst airborne Sam looks down his weapon in slow motion and can take some bad guys down. Similar slow-down-aim-assists-that-look-awesome can also be achieved by aiming after rolling, aiming while sliding and aiming after delivering certain mêlée attacks.

The catch is, these abilities use power, and that’s fine if you don’t use the entire bar (it recharges quickly), but if you decide to stay in slow motion to bring down another machine, you may find the suit overheating; leaving you vulnerable and powerless. Sam’s mêlée attacks also completely drain his power bar and overheat him automatically but as a result deliver a gratifying payload of pain to any unfortunate enemy. Balancing all of this is intimidating at first, especially as the hoards of robots are not very forgiving. Once mastered however, you will never forget the first time you slide under an enemy’s legs, slow motion kill its weak-point-laden back before bouncing off another guy to rain hell from the sky. The combat generally is a thrilling experience that largely transcends the context within which it is placed.

It’s worth noting that the title is certainly no push over, and whilst it shouldn’t cause too many problems for those familiar with Bayonetta’s level of difficulty, it does present a sturdy challenge. Enemies will pile on you as armies sometimes and destructible cover provides little respite from the fray. Your military buddies are basically useless on the field, but they will every now and then draw enemy fire. Bosses are often knuckle-bitingly indestructible and sometimes move as fast as you do. Those who persevere though should make it through the game in about seven hours, leaving Vanquish a bit on the short side, although throughout the experience I was looking forward to going back and playing some levels again. You don’t play Vanquish for the narrative or progression, you play it for the visceral and gratifying combat, and there are far and away enough venues included on this disc for you to exercise it in.

Visually, it’s everything you’d expect from a premium Japanese studio… stunning. The animations are flamboyant, the speed is intense, the textures are generally brilliant, and if Rockstar’s LA Noire hadn’t already come out Vanquish would sport some the most convincing rendered facial expressions in the industry. On the other hand the sound track is suitably futuristic but like the voice work, fails to leave a lasting impression.

Overall, if you want an expositional epic or a deep, customizable experience, you will not find it here. What you may find however is an exceptionally good third-person shooter that’ll keep you always coming back for more.