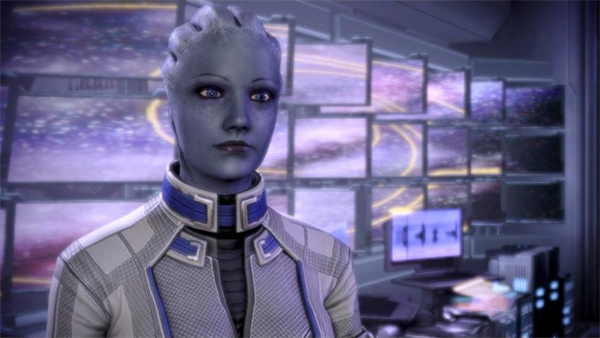 Liara’s return is a particular highlight.

Saying that Mass Effect 3 was highly anticipated is a bit of an understatement. People have been impatiently waiting for the concluding part of Bioware’s epic science fiction series since it was announced back in 2010. However, does the game live up to the monumental level of hype which surrounds it? I definitely had a great time playing it, although I don’t think the game is that much of a step up from Mass Effect 2. Whereas that game felt revolutionary when compared to the first installment, Mass Effect 3 feels more like a refinement.

The basic premise of the game is that an evil race of hyper-intelligent machines called Reapers have invaded Earth and are intent on wiping out all advanced life in the galaxy. As Commander Shepard you must unite the different races in the galaxy in order to strike back at the Reapers and take them down for good. This is a direct continuation of the story from the previous games, and your choices in those games have a direct impact on how things play out in this one. Various long standing plot points from previous games are resolved, which is really satisfying if you’re invested in the fiction. You also encounter characters from the previous games at different points in the story, some of whom join your squad. While this can feel a bit like a victory tour at times (you literally meet up with old friends everywhere you go) it makes for a rewarding experience if you played the previous games. However, the ending is a bit disappointing; (although it’s nowhere near as bad as half the internet would have you believe) it feels quite rushed and there are a few scenes that don’t really make that much sense.

The game feels more like a shooter than ever before, it continues Bioware’s recent trend of streamlining their role-playing games and placing more emphasis on action. The aiming has been sped up and cover plays a bigger role. The environments also have more verticality which makes the firefights more tactically interesting most of the time, although the controls can get frustrating at times (at least on PC) as the space button is mapped to a load of different actions. The game does include some RPG elements though; you level up, upgrade your equipment, and you can pause the game in the middle of the action to select powers to use on enemies. The mission design is also some of the best in the series, I was impressed by how many of the non-story missions were substantial experiences in their own right and there are some really epic set-pieces in the story missions. However there are still a few tedious fetch quests which amount to little more than going to a star system, scanning a planet, and leaving (I genuinely have no idea why developers continue to include these kind of missions).

The other big part of the game is the trademark dialogue trees; during conversation you can choose what to say or do, which has quite a big impact on how the story plays out. You also have the option to interrupt people in the middle of whatever they’re doing, which sometimes has pretty cool results (the link contains some spoilers). The systems in place are basically unchanged from the second game, but that doesn’t mean these sequences aren’t compelling. You feel like you are much more in control of how everything plays out and they allow you to get to know the characters in an engaging way which just wouldn’t be as easy using cutscenes. I was impressed by the character design in this installment, even if the most fulfilling moments come with characters which return from previous games, most of the new characters are pretty well done (except for one rather dubious space ninja). The characters really are integral to the whole experience, it’s through them that you actually get invested in the different factions and species which really made some of the resolutions that much more compelling.

The game also looks good, I really enjoyed playing on the worlds where you could actually see the fight against the Reapers going on in the sky above you. There is also some good variation from planet to planet: you travel from wastelands to space cities and everything in between. I really think that videogames are perfectly suited to science fiction; getting to explore all of the different planets yourself really adds a lot to the experience. The music is suitably epic and the voice acting is believable. However, there are a few technical issues, such as voice acting not being present for some lines as well as some awkward animations. While this doesn’t spoil the whole experience or anything, it does break the illusion when it happens.

I do have a few issues with the game though.. Annoyingly Bioware seem to assume that you’ve played the DLC for Mass Effect 2; the start of the game doesn’t really make sense unless you’ve played the Arrival DLC. Another ludicrous decision is that the outcome of your single player game actually partly depends on how much you’ve played the multiplayer part of the game. As someone who has no interest in playing the multiplayer component at all, this was a bit infuriating. It basically meant that I had to do a load of fetch quests in order to gather enough military strength to be ready for the final battle.

Overall, while Mass Effect 3 is undoubtedly a good game which brings closure to a large part of the series, I can’t help but feel like an opportunity may have been missed. I feel like this could have been an era defining game, but it just falls a bit short. I think a lot of the problems stem from how similar it is to Mass Effect 2, it just doesn’t feel as fresh as that game did. However, I definitely had a great time playing it, but I would advise people new to the series to play through the previous installments in order to get the best out of it.