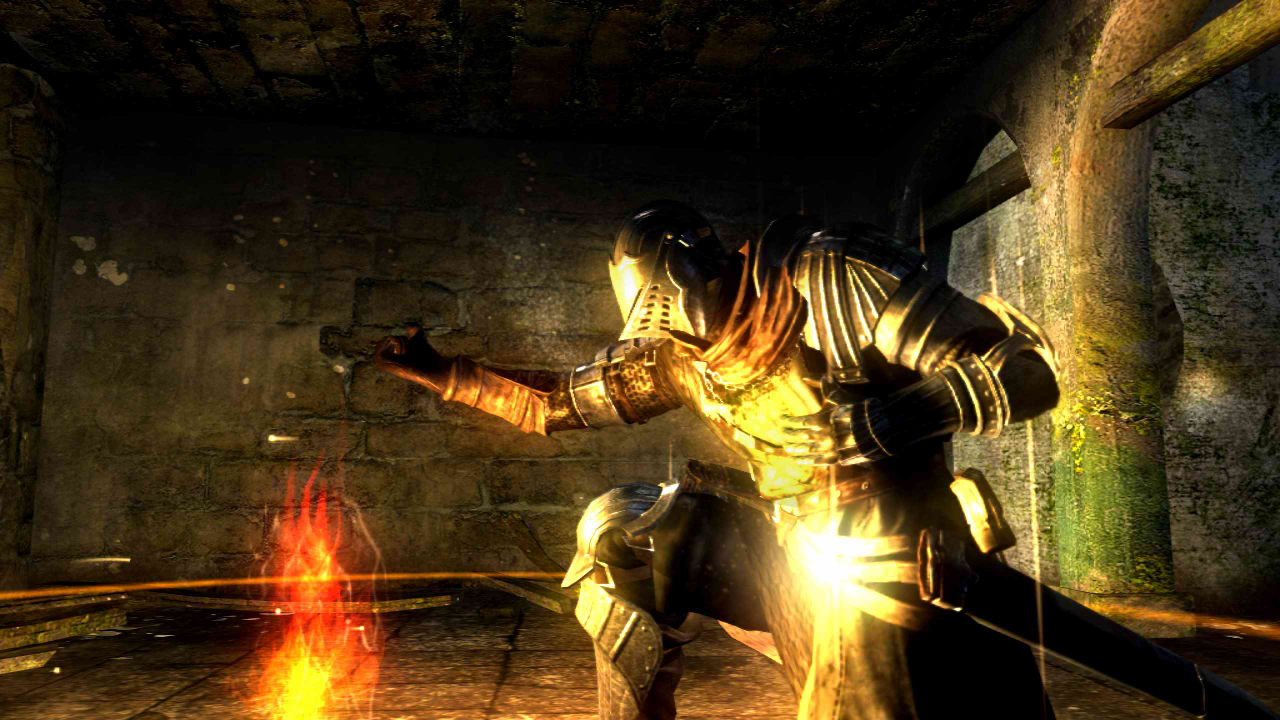 It’s worth noting that I haven’t finished Dark Souls, I likely won’t for many hours. Dark Souls is ridiculously difficult. It is even more difficult than its notoriously hardcore predecessor Demon’s Souls. It’s so difficult in fact that every tiny enemy felled is a massive achievement, and every boss destroyed is a day-making affair. And in spite of everything its propaganda suggests, tear-induced depths of frustration do eventually give way to one of the most satisfying gaming experiences you can have on a console.

Developers From Software use a narrative style that sets their titles apart from the modern video game. It reads more like a text from the past that indulges so deeply in its own context that you can’t help but feel slightly out of the loop. Little helpful exposition takes place in cut scenes and instead, Dark Souls simply immerses you into its world so profoundly that its vagaries and high-concepts slowly begin to make sense. It plays with notions of the afterlife liberally and even examines the birth of all things. Ultimately however it boils down to a lowly wretch uncovering grave secrets and the requisite power to destroy a looming and destructive evil.

Dark Souls is essentially a dungeon crawler. Most of your time will be spent navigating large maps, killing enemies and looting better equipment. The all in one currency/experience returns in the form of souls, which can be farmed from enemies, stolen from bosses and gained from consuming certain items. The problem is, if you die, your unspent souls are left with your corpse. You do have the chance to regain them providing you can get back to your body but doing so isn’t easy, as all felled enemies will reappear and stand in the way of your precious recovery. Die a second time and your souls, and time invested, are lost. Checkpoints take the form of ignitable bonfires that double up as places to spend experience and gain levels. They are often spread painfully far away from one and other however, usually lurking behind a gruelling boss fight.

Dark Souls replaces its forbear’s hub-based level structure with a pseudo-open world, made out of winding, interconnecting paths. Once freed from the shackles of the very gloomy Asylum, you are released on to one of the darkest and most realised places in the industry. Each NPC met acts like a fellow person participating in the endurance, and you find yourself taking genuine solace when you ally someone with obvious advantages. Each towering spiral and every haunting forest feels impactful and inhabited. It’s perhaps the fact that you progress through these areas so slowly that allows you to appreciate the intricacy of the environment, and for the most part, you’ll be glad it does.

I’d quite like to place Dark Souls’ difficulty on cheap and broken game play. I’d quite like to say that the only reason I spent 20 hours of my life dying hundreds of times, is because of something other than my own incompetency. Unfortunately I can’t. Dark Souls’ game play is tight, controlled, flexible and flawlessly executed. Melee combat can range from plodding exploits of shielded defence and measured riposte to sprightly parries and dodges touched by flourishes and reflex. Archers have the ability to manually aim and mages can bring down their foes with elemental force. Every class has a chance against every enemy and your deaths are almost always your fault.

To topple these foes you can build a tank-like behemoth swinging a blade bigger than your torso, or you can build a stealth focussed archer who finds vantage points and assassinates with precision. The good thing about the character building systems is that they are completely flexible. You are no way forced to abide by the class you choose at the beginning and it is fine to build a fast, armoured, sword wielding, mage who is proficient in ranged and melee combat. Of course as the hours move forward, specialising may be the only way through, but these decisions come organically and as a reaction to your developing gaming style as opposed to on the spot and arbitrary decision making.

From Software carry over their pioneering implementation of online play. Instead of dedicated online modes, you are consistently connected to the community. Other players will flicker into existence as ghostly phantoms as you both go about your business. Players can cross this barrier using special items, either to invade and assassinate the player, or aid and bolster as an ally. On top of this as you explore Dark Souls, messages left by other players appear across the land as do accessible flashbacks of their most epic failures. It’s a far more organic kind of online interaction which provides both a strange sense of comradeship and apprehension.

It’s not all high praise of course. The difficulty will put many off and I predict Dark Souls will soon be coating the used section of game retailers very soon. It’s a tough barrier to entry, especially if you haven’t played Demon’s Souls, and that accounts for everybody owning only an Xbox. The aesthetics are generally rich and detailed but when the screen is full of enemies the frame rate can drop to a crawl. It’s far from game-breaking but it has cropped up more than once during the time I’ve spent with the game.

There’s far more to the depth of Dark Souls which would almost be ruined if over-explained. Suffice it to say, if you were put off by Demon’s Souls’ difficulty, From Software has given you little incentive to return to its warped mind, but those who persist should be ready to engage with a world as spectacular as it is haunting.