On video game music (part one)

Obviously there are songs that pretty much everyone has heard. The music from World 1-1 of Super Mario Bros., for example, is so well-known inside and outside of the gaming world because it’s the Mario song – it’s synonymous not only with the Mario series, but that era of video games as a whole. What’s more, this song reappears throughout the series due to its iconic status (a steel pan drum cover serves as the title theme for Super Mario 64, a remix of the song is the battle theme for Paper Mario: The Thousand-Year Door, and so on…), and so you’ll be hard pushed to find someone who doesn’t at least recognise it. 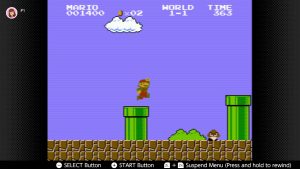 You also have songs that are well known amongst people of different ages, depending on the games they may have grown up with – the Tetris theme (a Russian folk song also known as ‘Korobeiniki’), the theme of Green Hill Zone from Sonic the Hedgehog, the Pokémon theme, or the Wii Sports theme, to give a few examples. (Incidentally, a Eurodance cover of ‘Korobeiniki’ actually got to #6 on the UK singles chart in 1992, so there’s that. Who says video game music isn’t real music?!)

But all that isn’t really the focus of what I wanted to talk about. Of course there are songs that people know, and they have an important cultural status in just why that game has become so important and iconic to gaming history. However, I really wanted to discuss songs that are great in various ways, either outside of their status as part of a game’s soundtrack or as part of it, and often what they add to the game they originated from.

Listening to ‘Devil Trigger’ from DMC5 actually gave me the idea for this discussion in the first place. Devil May Cry is Capcom’s stylish hack-and-slash series, starring the part-demon ‘Devil Hunter’ Dante, his, er, confusing family dynamic, and his friends. It’s been around since the PlayStation 1 era and it was already pretty well-known for its music, as well as its fast-paced gameplay, and its ranking system. DMC5, however, takes things to a whole new level of cool. 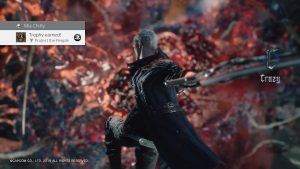 This game makes use of dynamic mixing: so as you fight better, your style rank increases, from D (‘Dismal’) to ‘Smoking Sexy Style’, and accordingly the song that is playing increases in intensity. The theme playing will depend on who you are playing as at that time, so generally it will be either ‘Devil Trigger’, ‘Crimson Cloud’, or ‘Subhuman’. The use of dynamic mixing is so good because it builds the atmosphere and the motivation to keep up your combos and finish off that enemy in style. 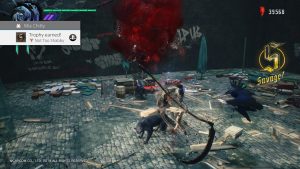 Out of the three main battle themes, ‘Devil Trigger’ is my favourite because of the way it builds up as your style ranking increases, and because the genre that this song sits in (heavy rock) appeals to me the most. It also seems to be probably one of the most popular pieces of video game music recently, with 19 million views on YouTube, demonstrating that irrespective of its status as a ‘video game song’, it’s just really good.

It’s not just the main battle themes, either. Nico’s theme can be heard around her van and the upbeat, bouncy nature of the song suits the mechanic’s personality very well. 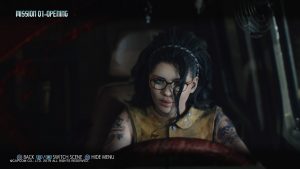 Nico in the opening cutscene

This is one of Nintendo’s most long-running series, with good reason. Some of the games in the Zelda series are genuinely iconic in many ways, and part of its popularity is down to its music.

I have nowhere near enough space to discuss every song worthy of a mention here, but one major highlight is the main theme, first appearing as the overworld theme in the original Legend of Zelda. It pops up again and again, notably as the Hyrule Field theme in Majora’s Mask, and in the theme playing in Hyrule Castle in Breath of the Wild (more on that later).

‘Zelda’s Lullaby’ is another one of those songs that appears throughout the series, functioning as Princess Zelda’s theme and appearing most prominently in Ocarina of Time, where playing it on the Ocarina allows you to solve various puzzles (and interestingly it also appears, albeit in reversed form, in Skyward Sword as ‘Ballad of the Goddess’). There’s the theme of the Lost Woods / Saria’s song in Ocarina of Time, reappearing as the Sacred Grove’s theme in Twilight Princess, ‘Epona’s Song’, which is used to summon your horse in several games (and as the stable theme in Breath of the Wild), and the Fairy Fountain theme, which also pops up frequently as the file select theme. 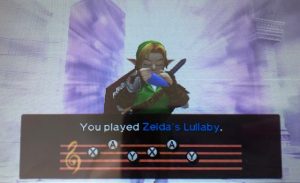 Ocarina of Time introduced a lot of the series’ most iconic songs, and also features some that are pretty incredible in their own right (‘Gerudo Valley’, anyone?). Music plays a pretty central role in this game, due to the titular Ocarina that Link plays. Twilight Princess, as well as having some continuity in terms of music with Ocarina of Time (for example, many of the songs you can play on the Ocarina reappear as songs you can learn at the Howling Stones as a wolf in Twilight Princess), has a fantastically triumphant Hyrule Field theme. However, at night, the music turns sad and sparse, with lamenting vocals that sound just like Malon from Ocarina of Time. The soundtrack to areas covered by twilight is chilling, and conveys the feeling of being one of the only living beings in an abandoned world.

And Breath Of The Wild’s music has been criticised for being, well, non-existent. Most of the exploration of the world is accompanied by ambient piano music, and lacks the bombastic excitement of Ocarina of Time or Twilight Princess’s Hyrule Field themes. However, I really enjoy a lot of the music playing in the various settlements throughout Hyrule (Tarrey Town’s music, for example, is layered, so as more people arrive to the town, another layer is added to the song until the town is full and the theme becomes ‘complete’). 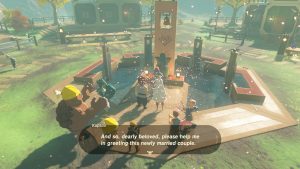 The wedding at Tarrey Town

However, the Hyrule Castle theme is absolutely a stand-out from Breath of the Wild. Outside the castle, you have a foreboding and intense theme that builds to a chorus where the main Legend of Zelda theme starts to play, giving you the motivation to continue – and on the inside of the castle, it seamlessly moves to a quieter and more tragic version of the same song, using organs instead of trumpets and incorporating ‘Zelda’s Lullaby’ instead of the main theme (though a very subtle echo of it appears after this portion), reminding you that Zelda has been in the castle fending off Calamity Ganon alone for 100 years. Now that’s sound design. 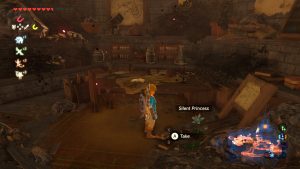 (And if you needed any more convincing that the music from this series is incredible, the rhythm game Cadence of Hyrule combines the gameplay of Crypt of the NecroDancer with Zelda music, with fantastic results – ‘Kakariko Crypt’ and ‘Gerudo Valley’ are highlights).

Next time, I’ll be discussing several more games with fantastic soundtracks, and what makes them so great.