Hey, You Should Play This: ‘Tiny & Big: Grandpa’s Leftovers’

Once every now and then you pick up a game that you’re slightly apprehensive about; you don’t know what to expect as there has never been anything like it before. Tiny and Big: Grandpa’s Leftovers is such a game; the main plot point being about a pair of magical underpants once owned by the protagonist’s grandfather and referred to as his leftovers (make of that what you will). In terms of defining the game, Tiny and Big could be described as a physics puzzler, or possibly a 3D physics platformer. Think Super Mario 64 meets Portal, with the portals being replaced by a ray gun, a grappling hook and some rockets. But in many ways it’s more than just this; it’s a brilliantly quirky and challenging game with a charming yet exciting soundtrack and an art style to match.

The story is a strange blend of mythology involving an ancient civilisation, an enormous stone pyramid, and a pair of magical underpants which when worn as stylish headgear invoke terrible and uncontrollable powers. In terms of plotline, Tiny and Big is relatively straightforward, with the player having to retrieve the underpants from Big (the antagonist) who develops strange powers which he uses against you in his quest to destroy Tiny (the protagonist) and become supreme owner of the pants. An extremely complex and nuanced plotline this is not, but if you’re simply on the lookout for an indie title which provides a funny and enjoyable experience with a plot that while not being a literary masterpiece does provide enough character and quirk to keep the player entertained for hours at a time. 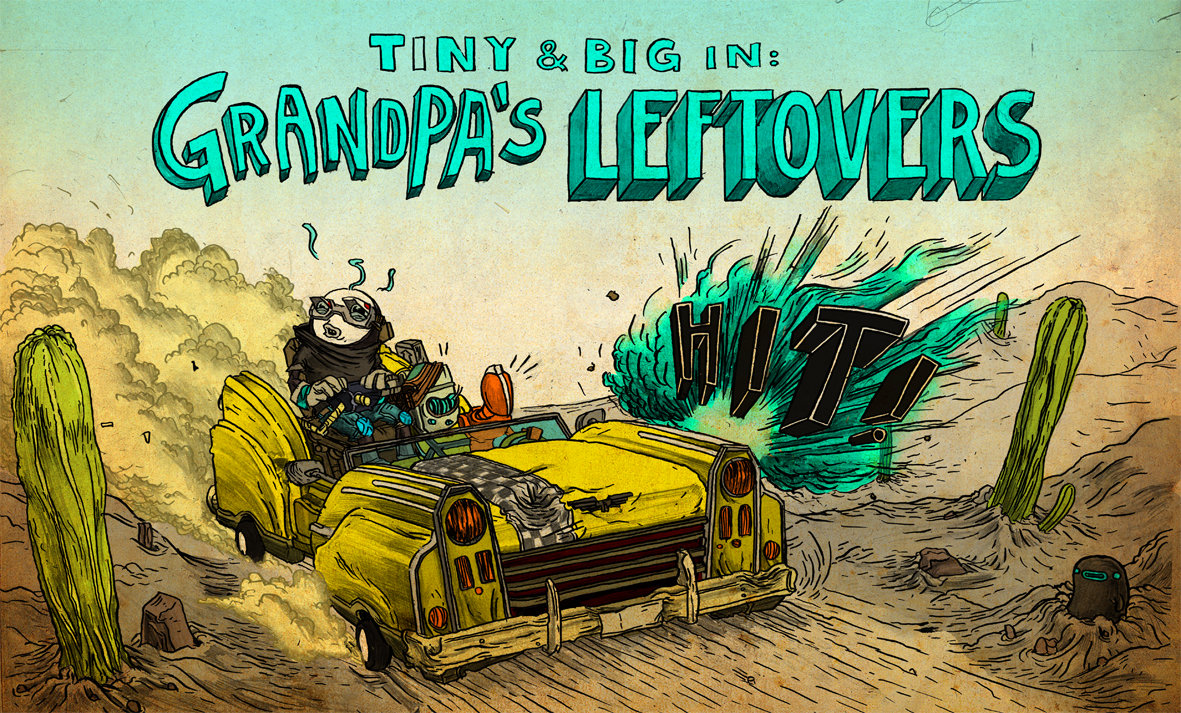 A lot of this quirk bleeds over into the art-style. A good majority of games now struggle to develop their own ‘look’ and style, many electing for hyper-realism, which despite showcasing the technology on offer, does result in a certain amount of games looking boringly similar. Games that provide something new, such as Borderlands and Bastion are, if not ‘made’, much improved by an interesting art-style. Tiny and Big provides this refreshment in spades, the whole thing being beautiful from beginning to end. The animation is flawlessly smooth, and the standard of the bold art style with which the environments are created never drops below outstanding. In particular, the hand drawn backgrounds and watercolour-esque character models create a startlingly pretty effect. Considering that most of the in-game environments are depicting various kinds of rock, sand and dirt the fact that the game looks as good as it does is a credit to its style. Even its menus are stunningly detailed. In this case the combination of art style and a tongue in cheek story creates an intriguing game that is endlessly fun to just look at.

Gameplay is obviously paramount in any game, apart from those which constitute a mainly visual experience, such as Journey, however Tiny and Big is a game that while looking great also plays incredibly well. Being a puzzler, Tiny and Big can be challenging but it is also clear to see that it is a fair game that does not punish the player too harshly for experimenting with its physics. There is an infinite respawn system, which to the casual gamer is a godsend, enabling the game to be a fun experience, but it is easy to see that this may turn away more serious gamers. But this is only really a problem if you’re expecting a cripplingly difficult and hair-tearingly challenging game, which Tiny and Big most certainly is not. The key tools provided in this game (a laser gun, a grappling hook and rockets) all provide simple mechanics with which to tackle the levels of the game. The pseudo-tutorial is very clever, as it allows you to discover how each tool works for yourself, with only slight hand-holding. Besides, chopping up giant rocks with a huge laser can’t be anything but fun! (Unless you get squashed that is.) There is also a tutorial proper which functions via a handheld ‘Gameboy’ like device, explaining movement, objectives, tools, etc. and how each of these work in a cool, vaguely Tron-looking setting. The simple controls coupled with the straightforward tutorials ensure that you’re never overwhelmed with overly complicated controls and get at the gameplay, which as well as being a pleasure to see in action, is also just challenging enough to be engaging. 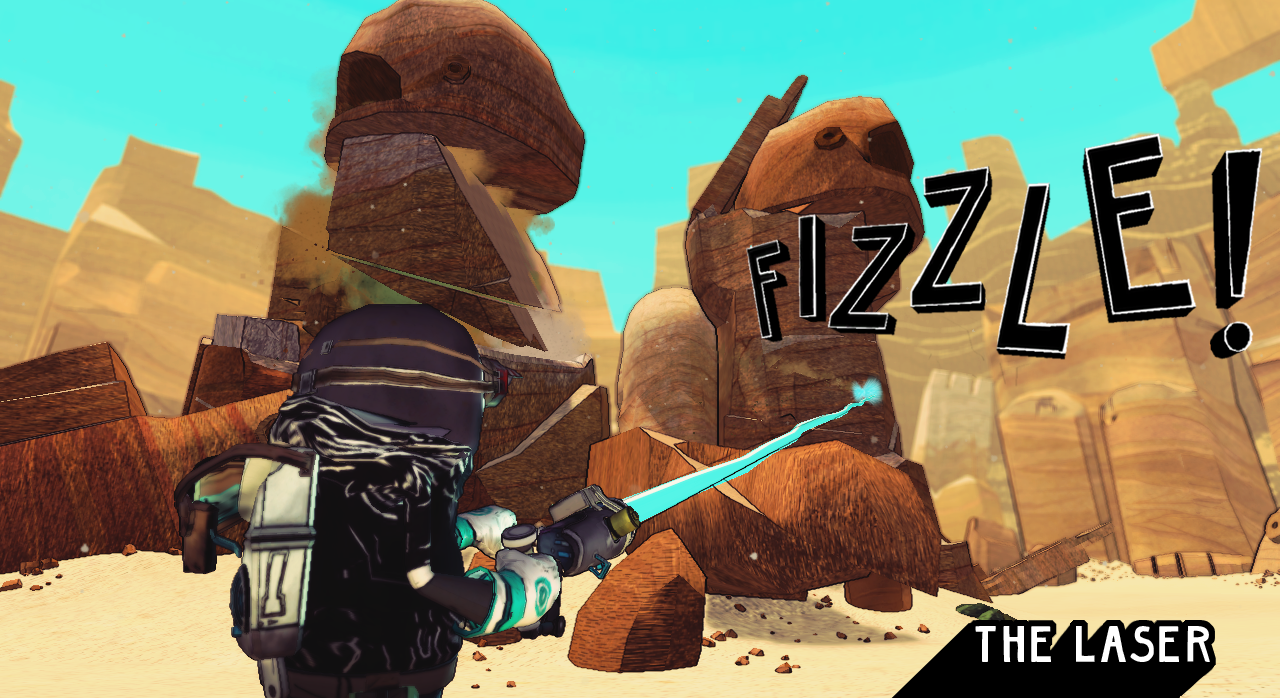 It also helps that Grandpa’s Leftovers has what can only be described as a distinctive soundtrack, being composed of songs from bands and groups that many will never have heard of. The result is that each and every song you come across is a unique experience. Contrary to what might be expected, this difference is what gives the soundtrack as a whole a distinctive vibe, the strange nature of the sound making each song a part of the soundtrack. Tiny and Big is a strange game and in many ways such an odd soundtrack fits perfectly, matching the game quirk for quirk. Even an element of player choice is introduced, as tracks are littered around levels in the form of cassette tapes that have to be collected to be added to the soundtrack meaning that the sound of Tiny and Big can either be a kaleidoscope of music styles, tempo and moods or it can be mindlessly repetitive. It’s all up to you. Another feature that offers another angle to proceedings is the addition of a music player function in the pause menu, which allows players to choose what tracks to listen to. Most games do not offer a choice over how you listen to the soundtrack, let alone choose not to, which even as a small option, really adds more to the experience. The soundtrack is simply brilliant and provides another extremely memorable aspect to a very memorable game.

Once every now and then you pick up a game that you’re slightly apprehensive about, and sometimes, just sometimes, it’s a gem like Tiny and Big and the risk pays off. It’s a charming combination of art style, gameplay and soundtrack that comes together and just works so, so well. As a fun, challenging and extremely engaging experience, its only flaw is in being almost painfully short, lasting at the most about three hours. They are, however, three wonderfully entertaining hours, which provide a large degree of humour, a big helping of mental exercise and a well-realised in-game world which looks amazing. So, if you’re looking for a quirky game with heaps of character and a brilliant soundtrack, then give Tiny and Big: Grandpa’s Leftovers a go. It might surprise you.