Hey, You Should Play This: ‘Shadow of The Colossus’

I have to admit this one is a bit of a cliché. If you know anything about computer games, the likelihood is, you’ve heard of this game. But that’s the thing about clichés; they exist because they’re still relevant. A good gauge of how highly regarded this game is can be gained from a piece of Internet history. A while back, the late great film critic Roger Ebert wrote an article in which he asserted that computer games could never be considered art. Naturally, he got a large amount of responses from gamers, and had to follow it up with a second article, where he stated that one game in particular had been mentioned more than anything else. The gamer trump card? Shadow of the Colossus.

So what is it that makes Shadow of Colossus so highly regarded, and why should those from modern gaming generations play it? A main contributing factor simply has to be that it is so close to being perfect. The game has a sharp focus on both the story it is telling and the experience you get, and manages to deliver it in one fantastic looking package. Put simply, Shadow of the Colossus is one of the greatest video games of all time. Its greatest achievement is coming close to defining the features of what makes a video game, or at least, what has been the fundamental essence of what video games have always been.

The game’s most outstanding feature is its concept, as it follows the trials of Wander, a young man who seeks to restore the life of a girl named Mono. To achieve this, he takes her to a temple in a forbidden land, and beseeches an entity known as Dormin, tells Wander he will grant his wish, providing that he defeats the 16 Colossi. These Colossi are aptly named, and are as large as their names suggest. The entire point of the game is defeating them, and what’s more, doing it armed only with a sword, a bow, and your trusty steed Agro. It can almost seem impossible, yet it isn’t, and this experience alone is quite unique in the gaming world. The game leaves you under no illusions as to what it is about. The focus, the end goal, the reason why it is happening, it’s all there, in its pure magnificence.

The story of the game has many layers to it. Though rather straightforward at times, this ends up working in its favour. Wander’s focused determination and the scale of his achievements as the game progresses are contrasted superbly with the ominous events that precede each victory. Besides the occasional speech from Dormin, most of the story is conveyed not through speech or writing, but by actions, symbolism and appearance. This all comes together towards the end of the game, in one of the most moving events in gaming history (you’ll know what it is when it happens). It affects gameplay, and it also acts as a suitable metaphor to show that the story is reaching its end. The story and the game in general cannot fail to deliver a particularly epic feel, and merely experiencing the impossible feats that Wander must overcome to save the life of a girl the player knows nothing about says all one really needs to know.

Another strong aspect of this game is the graphics and visuals. The game world, in spite of being rather desolate, is amazingly beautiful, and the graphics, for the time, are first rate. It is worth remembering that this is a PlayStation 2 game (though it was later re-released as part of an HD collection), so the mere fact that Team Ico achieved a game this beautiful is mind-boggling. The visuals do look a little dated and clunky now, but not by very much, and there is very little different between cutscene and gameplay graphics. The Colossi look stunning, with intricate design; they are moving platform puzzles that cannot fail to catch the eye. All of them are also significantly different in style, appearance and movement. For instance, there is one immense Colossus that flies through the air supported by what appear to be massive airbags. To get to it, you have to bring it down, violently, to your level. That itself is a visual experience, and it one of many you get in the game.

Another thing in particular that stands out is the horse, Agro. The way it moves is very realistic, and elegant. A real effort has been made to integrate the horse into the game and the story. There is obviously a strong bond between Agro and Wander, and it isn’t that hard for the player to get attached to the horse either. There are some interesting features to Agro. She reacts to obstacles and cliff edges (realistic, though it can also be annoying at times), the actions of the Colossi, and even having Wander’s bow pointed at her. The controls for Agro are simple, but it takes a bit of mastering, especially as the horse is required for some jumps and combat with certain Colossi. 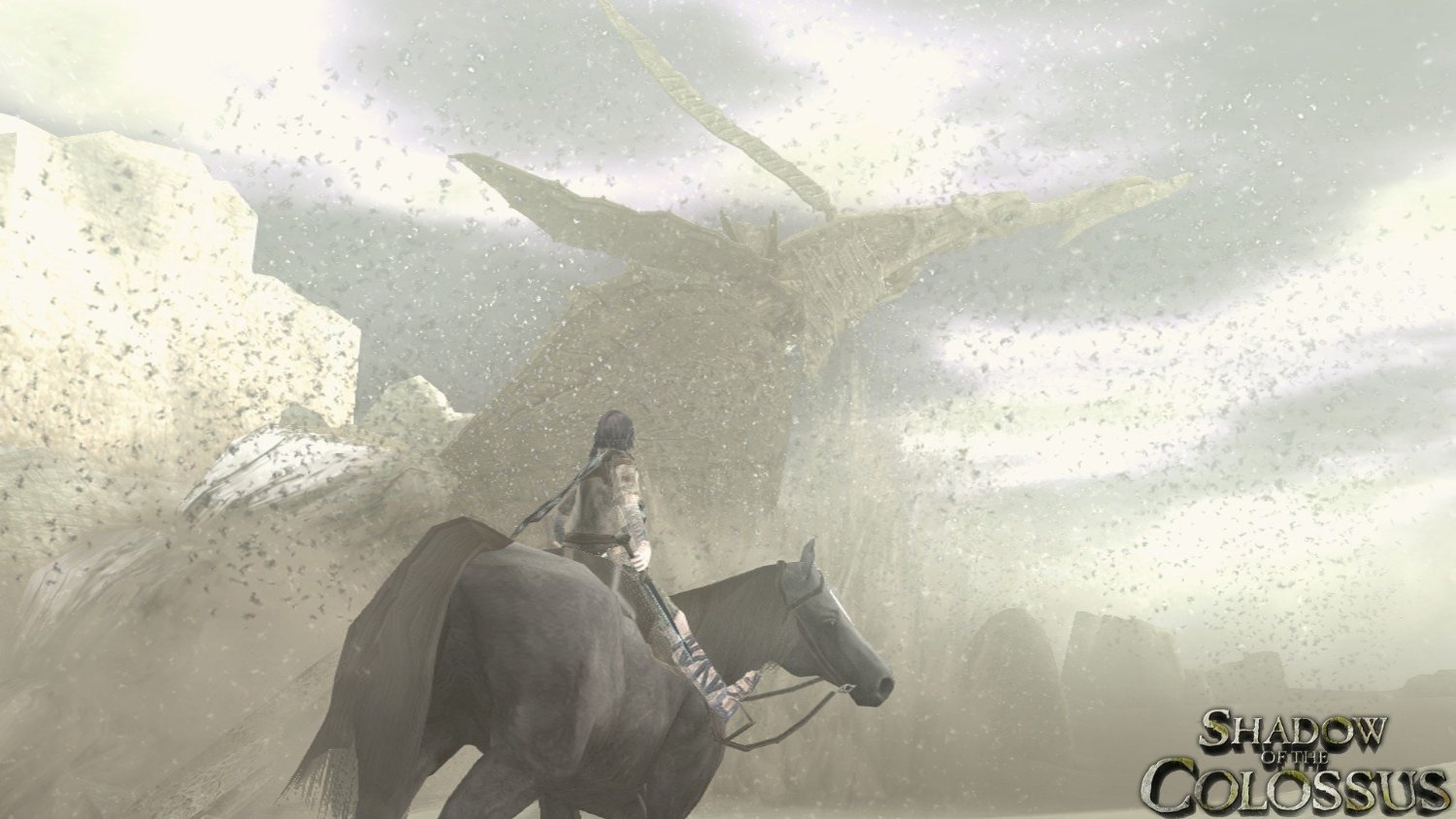 A lot of that immersion comes through into the general gameplay too. Interacting with the environment, and the Colossi is the core aspect of the game, and as such beating them requires skill, patience, and finesse. It is likely you will fall off several of the Colossi, especially if you don’t watch your stamina gauge. Simply put, the game is not an easy one, and the battles with each new Colossus (particularly from the 3rd onwards) get progressively harder, with the last being particularly difficult, due to how big it actually is. Yet, beating each Colossus grants a massive sense of achievement, and gives the player a means of tracking their progress. Part of that sense of achievement is given though how the game focuses you on mastering the available skills rather than defeating the Colossi through unlocking new abilities (a rare feature in modern gaming). For instance, beating some of the Colossi requires that you fool them and make use of their anger, a particular attack, or certain terrain features in order to make them vulnerable enough for you to clamber onto them. Fooling the Colossi, and using your wits becomes very important.

It’s actually a sublime feature of the game that Wander possesses all of the tools he needs from start to finish. All he uses is his horse, his bow, and his sword. There is no levelling up (although the player can eat special fruit and white-tailed lizards to increase health and stamina respectively), no new equipment (although there are “for fun” weapons that can be unlocked in a time trial mode) and no special abilities. Wander must ride, jump, roll, climb, shoot and stab his way through all of the Colossi. It’s quite an exhilarating thing that armed with these very basic features, the whole game revolves around taking down massive creatures.

So we come to the nub of it. What is so special about Shadow of the Colossus? The answer is that it offers all of the fundamentals of gaming: a unique appearance, premise and goal to achieve; a visual experience that is engaging and memorable; adrenaline pumping action that requires skill and finesse; challenging gameplay with incremental difficulty allowing the player to track their progression throughout the game; and gameplay functions that can be played and mastered. It is true that many games also deliver these features, but never in gaming history have these features ever been combined into something as sublime. If you truly consider yourself a gamer, you really should play Shadow of the Colossus.