Michaela Atanassova in Gaming on 2 February, 2017. 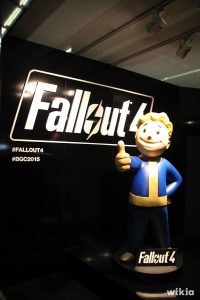 Fallout 4 was one of the most anticipated games in 2015 as it had been in development for 7 years but put on hold due to The Elder Scrolls V: Skyrim. For the first 24 hours the game sold 1.2 million copies on Steam and broke GTA V’s record for having most online players in a non-Valve Corp. game. Interestingly, numerous adult sites disclosed a total drop in traffic visits by 10% on the day of Fallout 4’s release. Unsurprisingly, the game received awards and nominations continuously for gameplay, depth of open world, soundtrack, crafting, player freedom by Academy of Interactive Arts & Sciences and British Academy Games Awards. Bethesda upgraded its next generation Creation engine, previously used in Skyrim, with dynamic volumetric lighting, blended together animations like walking and running to look more realistic and altered the version of Radiant AI which is responsible for dynamic interaction with the environment. Apart from the detailed design of the world, the most entertaining and rewarding experience is to explore and salvage everything you can get your hands on. As personally crafting is an interest of mine and was excited about the opportunity to build settlements in Fallout 4 where you can hide objects but need to provide sustenance and defenses for non-playable characters and merchants. Building a network of towns is more than a closet for the vast collection of items as it gives you a perspective beyond sidequests and a sense of progression.

A basic search for the family of the main protagonist after nuclear war turns into a complicated adventure which confronts you with factions competing for control of the region and put you in ambiguous situations. Deciding who to side with changes their influence and the hardest thing is to find meaning in their imperfect post-apocalyptic philosophies in order to achieve the desired outcomes in the events. Not only the culture of the groups is explored but also individuals you meet throughout like irredeemable murderers whom you can show empathy and look into their trace of humanity. Basically the story is set 10 years after Fallout 3 and it explores and alternate 1940s when the potential directions in science and technology have been attained and you are left with a retro-futuristic universe. As you travel you can meet 13 possible companions who for the first time can interact with the environment and prove to be useful if they have unique skills like hacking, melee attacks and who provide additional perks like Energy Resistance. They have their likes and dislikes and choosing them according to strategic preferences is advisable as for example Nick is expert in lockpicking and hacking which saves you from investing points.

As for gameplay the perks system that combines skills point and traits gives your character progression in a big Vault Boy chart. You can invest in low –level perk or boost special ones like LUCK which statistically increases your chances in combat – whatever you choose it has a significant impact on your character’s abilities and their effectiveness. The huge number of sidequests add a tone of dark comedy and humorous creepiness to the atmosphere. More importantly they are greatly beneficial as slaying enemies gives you Diablo-like rare special objects that can be upgraded in numerous ways and boost efficiency in combat. Looting is addictively rewarding as modifiers you come across hold many bonuses and make your character more personalized. V.A.T.S. system when as a first person shooter gives you the chance to critically hit a target manually in slow motion which keeps the pressure in the action sequences for most players. Others may stick with real time shooting and which is either in first person or third –person accuracy which is much more fluid than previous games. The player’s power armor is like a tank with fuel and the general inconvenience is to go back to you’re the place you hid and grab the suit when combat gets too critically hot.  Looking into some tips is always worthwhile because at first I didn’t know the value of bullets when I started running out of them and then searching to fill up the amount was quite a difficult task especially with enemies chasing you. In exploration having your pockets empty makes the difference and even in the vast amount of items you can find yourself making hard choices which to leave behind and which to save for future use.

Fallout 4 is far from a perfect game because initially it was released with tons of scripting bugs which prevent you from starting a quest or from finishing it. Although from then numerous patches have fixed most of them you can still see that body textures are hardly recognizable. The design The controls run smoother on PC than on other platforms as it some friends exhibited crashes. Moreover, companions often are difficult to control given the arduous navigation in the vast open-world. Other gamers got irritated by the long load screens which further made them impatient throughout the walkthrough. Of course, there are glitches with NPCs as in every game like not looking at you when in a conversation or walking into a wall and lag.

Overall, Fallout 4 is more complex and morally nuanced than its predecessors like Fallout 3 and Fallout: New Vegas. It is great fun even after hundreds of hour of gameplay because it gives the player to go through a personalized journey with memorable companion and some action with weapons like flamethrower which boosts radiation or a sniper with reduced recoil which gives you limitless flexibility and longevity. The enemies are engaging enough to make it hard for newbies and the VATS system build a little more pressure at first but it gets old after time. In my opinion, exploration and depth of the open world are the strongest features and the greatest flaws of the game because such a vast environment is truly enticing and addictive as it motivates you to search, develop and create while after time it gets quite buggy and complex. At first you are like information overloaded but then eventually the experience leaves you satisfied when you achieve your desired ending.