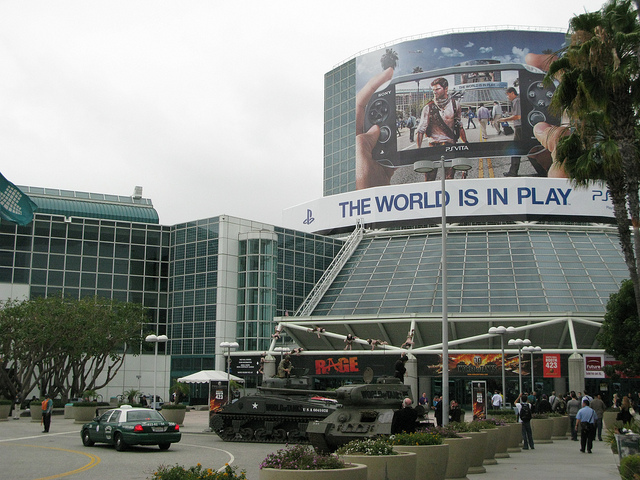 The Electronic Entertainment Expo in LA is the primary chance for publishers and developers to define the future of the gaming industry. E3 is now over for another year and once again it somehow proved to be both spectacular and underwhelming in equal measure. It would be a ridiculous (and frankly unreadable) article that contained everything that happened, so, in order to provide a piffy read to start the summer holidays, I’ve narrowed proceedings down to the main conferences and big reveals only.

First it’s probably apt to address Nintendo and the new console, the “Wii U”. After a predictable and elongated presentation of very little and an orchestra playing Zelda tunes, chief operating officer of Nintendo America, Reggie Fils-Aime was given the chance to unveil – as it had been dubbed – Project Café. Initially came the contrived name and following that a controller revelation. The controller adhered to many of the Ipad-shaped rumours that were floating about before the conference and indeed sported a 6.2-inch screen in between the odd button. Immediately the functionality was unclear and throughout the conference viewers were left wondering if this was a Wii peripheral or a new console. The “real life” gimmick sold the platform as a solution to when Dad is watching the sport when you’re trying to play Zelda. With a quick button press you can resume your Wii game on your Wii U controller. This was all very well, but as the video continued, the compatibility seemed very much to do with old Wii software. This was until a gameplay montage produced some high resolution releases such as Darksiders 2. The controller itself seems to have potential, especially in terms of multiplayer as it allows same-room play without the need for split screen. The processor itself looks to be outdated next year however and on top of that Nintendo revealed no new intellectual properties – Super Mario on the 3DS does look brilliant though.

Sony apologised for the recent PSN outages with quite a sombre and genuine speech from Jack Tretton, CEO of Sony America. The company went on to provide a far more varied conference than competitors that unfortunately underwhelmed as much as it diversified. That’s not to say the software wasn’t great, it certainly was. Uncharted 3 showcased a visually stunning level set on a sinking ship. The water’s appearance and interactivity were as mind blowing as we have come to expect from Naughtydog and their action packed trailer proved that the sequel is likely to deliver respite to all Nathan Drake cravings. Sly Cooper looks ready to make a return in the third iteration of the cult-followed and much loved platforming franchise and we were even shown some more of the brilliant Bioshock: Infinite. Of course the focus of the conference was Sony’s Next Generation Portable or as it was set to become, PlaystationVita. Uncharted: The Golden Abyss was shown on the platform which, despite looking visually incredible, was stunted by contrived touch screen implementation. Sony also released a “cheap” 3D television bundle. The software looked great though with promises that the interactivity between Vita and PS3 would be unparalleled. Sony suprised very little overall, the most astounding announcement being Vita’s launch price at a low 249.99.

Microsoft was the let down of the expo, showing little for the Xbox fans to get excited about. The focus of the event was clearly the Kinect and Microsoft provided sneak peeks at what looked like laughably poor games. Fable: The Journey is a poignant example as the series’ original was a decent console RPG. Leader of Lionhead Studios Peter Molyneux (a man known for setting sights too high and under delivering) has failed to impress the converted this time as what was shown seemed to be a first person on-rails magic-based shooter, delivering very little innovation or intrigue. Another Kinect failing was Star Wars Kinect, a game that, from last year’s teaser, looked acceptable. Hopes dropped as a Jedi awkwardly and stiffly moved his lightsaber through enemies revealing profoundly Kinect’s limitations. On top of this, industry highlight Tim Schafer showed off his brand new title… Sesame Street; enough said. In terms of new IP’s, the star of both this conference and arguably the expo was gameplay footage of the new Tomb Raider. Immediately we see Lara Croft escape from an airborne to trap, be impaled on a spike, be assaulted by a rabid man and almost get crushed by the cave itself. It was all staggering stuff and the gameplay was very cinematic and fluid. We didn’t see an awful lot but what we did see was brilliant. Oh and Halo 4 got crammed in at the end in teaser trailer form.

Electronic Art’s conference was very focused on their two hardcore franchises. A lengthy tank excursion from Battlefield 2 show cased the beautiful new Frostbite 2 engine it was running on. It will blow away this year’s competition visually. Reveals of multiplayer maps also took place. Mass Effect 3 showed gameplay on a much larger scale than Bioware have previously attempted, with gargantuan enemies and improved graphics. Boasting a deeper combat system and a new “omni-blade”, the gameplay seems a lot more frenetic and fun than it has in the past. Need for Speed: The Run looks ready to change the series’ formula with new out of car sequences on top of quality driving as ever. From what was shown the out of car sequences look convoluted, amounting to little else than a few quick time events. Ratchet and Clank creators Insomniac revealed Overstrike. All we were treated to however was a pre-rendered trailer which was tonally almost identical to Pixar’s film The Incredibles. Conceptually the game looks like it could be a fun class-based shooter. EA also had a large amount of incrementally improved sports games played by sporting celebrities I do not know.

Most of the games revealed at Ubi-soft’s conference were sequels to age-old franchises. Rayman: Origins, Brother in Arms: Furious 4 (which ludicrously has been turned into a camp humour-based Nazi killer) Assassins Creed: Revelations, Ghost Recon: Future Soldier, Driver: San Francisco, Raving Rabbids: Alive and Kicking, Track Mania, and Far Cry 3. One redeeming feature from this myriad of sequels was Far Cry 3 which, on top of looking graphically incredible, seemed to be very well written and acted. Driver: San Francisco looks to innovate very little but looked solid enough and similarly PC custom racer Track Mania will likely be a decent port to the consoles. A large amount of time was given to casual games such as Just Dance 2 and Raving Rabbids. Disappointingly we didn’t see the fabled Beyond Good and Evil 2, a new Splinter Cell or a new Prince of Persia.

I haven’t covered everything but the major announcements are in there somewhere. On top of the conferences there were games revealed on the show floor and elsewhere such as Hitman: Absolution, Resident Evil: Revelations and Ninja Gaiden 3. If you’re interested in knowing more, all of E3’s reveals can now be found all over the interwebs. Enjoy.