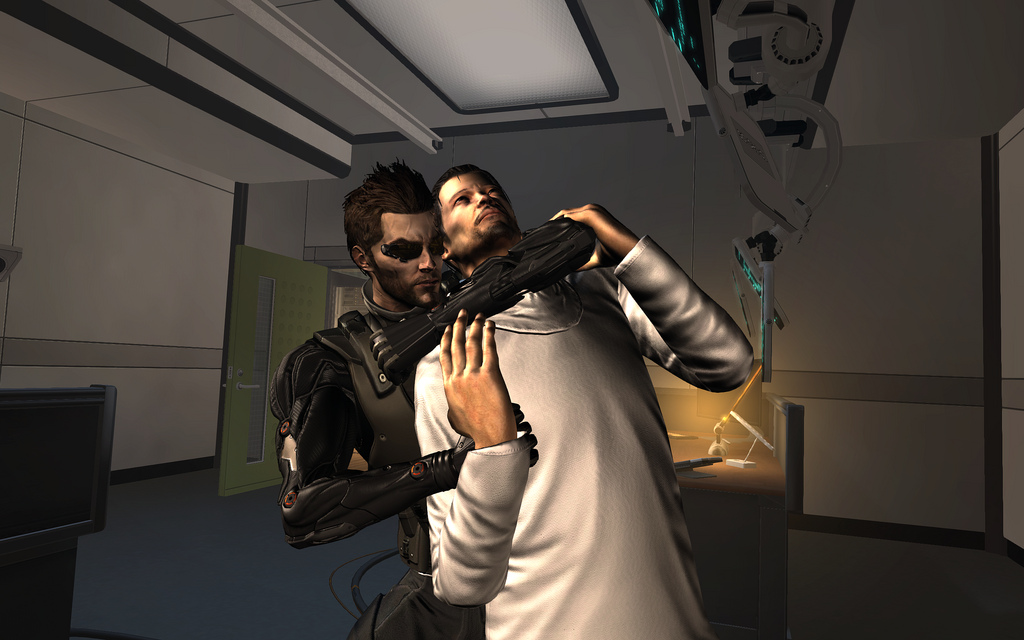 Adam Jensen – shades are augmented into his face!

The original Deus Ex is my favourite game of all time. In fact, I recently played through it again in preparation for the long awaited prequel and it still made me all warm and fuzzy inside. The 2000 action-RPG from – the now liquidated – ION Storm Inc. was a phenomenal blend of gameplay-changing character development and first person action embedded in one of the greatest dystopias ever realised in video game history. The sheer depth of what was created at the hands of the former iD employees was unseen in any other action game before it, reserved only for the players of the epic isometric RPG’s such as Baldur’s Gate and the original Fallout. Multiple playthroughs were a necessity with 3 different endings and several ways to approach every situation in the game depending on how you built your protagonist – JC Denton – and it was fair to say that I had never felt so engaged; so immersed in a game before it in my life: and I wasn’t the only gamer out there who had these feelings.

A forgettable and universally revoked sequel later and here we are in 2011 with the Eidos Montreal prequel to the original: Deus Ex: Human Revolution. I think it is fair to say that I, along with thousands of other die-hard fans of the original, spent most of the last couple of years crying ourselves to sleep under the pretence that we were going to get another Invisible War – a game that took the name of Deus Ex, threw in a couple of the characters and augmentations from the original for fan service and made a run-of-the-mill A-RPG that blew minds in the wrong way; straight out of the side of the head from a .44 magnum.

Human Revolution is one of the best single-player experiences I have had in a long time. Set before the original game in 2027, you play as augmentation developer Sarif Industries’ security manager, Adam Jensen, in a world where the development of human augmentation has split the population into those who are considered ‘augs’ and those who are considered ‘normal.’ You embark on a 20+ hour campaign of revenge, closure and global conspiracy after a squad of mercenaries break into the Sarif labs and wreak havoc; murdering pretty much everyone and leaving you to die. But being left to die has never been cooler thanks to your boss, David Sarif, who manages to rescue you by kitting you out with all the latest human augmentation capabilities.

And it is the augmentations that are the star of the gameplay here, which will make you original fans wet your pants with joy. Although, it is dealt with a little differently in HR with you spending XP-acquired ‘praxis points’ to upgrade the various abilities Sarif has made you capable of as opposed to the classic augmentation canisters you used to find hiding around the world in Deus Ex. It works surprisingly well, especially since they have effectively done away with the original’s ‘skill point’ spending system of increasing heavy/light weapon skills, hacking skills etc. and simply combined these skills into the augmentations. You gain XP in the standard RPG template way; exploring, killing/subduing, completing quests and generally succeeding. The augmentations you choose to upgrade will vastly affect your playing experience, especially because, as with all good RPG’s, you won’t be fully upgrading every tech tree in one playthrough and you are much better off specializing in either stealth or combat than you are floating around in the middle ground – but that is still entirely your choice.

And that is the beauty of this game: It is all about player choice. It felt so heart-warmingly familiar getting briefed on my first mission by Sarif and being offered the choice taking a tranquilizing sniper rifle or an assault rifle. Just like in the original game, you follow the same story through each playthrough, but your Adam Jensen can be different. Decisions you make can come back to haunt you – or reward you. Will you go into this perp-filled factory in Detroit with all guns blazing, blowing them away with your upgraded shotgun? Will you sneak past them, activating your cloaking aug to hop between cover points, only taking a couple out who get in your way with your silenced pistol? Or will you hack the security terminals and turn their own turrets and robots against them whilst you sit back and enjoy the show? Having these choices makes Human Revolution so versatile and interesting. There are several points throughout the game where I remember thinking ‘I have to do that differently on my next playthrough’ and ‘I need to kill this guy next time, not just knock him unconscious’ and ‘if only I didn’t throw away my rocket launcher, blowing up robots is cooler than avoiding them…’ The only parts where you really have no choice except pull the trigger are the (thankfully) few boss battles. To say the least, they are tedious and, in one particular instance, incredibly difficult to finish if you are geared and equipped for the stealth/non-lethal approaches but, as I said, they are thankfully few and far between.

But no matter how you choose to develop your Adam Jensen, you will always feel absolutely awesome. Stealthing or gunning through the beautiful, hazy-orange world with one of the best soundtracks I have ever heard in a game providing the perfect cyber-punk backdrop just feels awesome. The few things they changed that I thought would kill the experience – the regenerative health system, the absence of melee weapons, omitting lockpicks and multitools, the addition of a hacking mini-game and persuasion system – actually made no difference to me whatsoever and I felt no problem just accepting them: It is still easy to die if you don’t play very well, the melee weapons have been replaced by context-sensitive ‘takedown’ moves that even Chuck Norris would envy, lockpicks and multitools have been replaced by terminals that can be hacked with the mini-game that is actually fun and the persuasion system is an interesting addition, aiding in the development of smaller characters.

They got this right, Deus Ex fans. They really did. If you never played the original, you will seriously enjoy this game. If you did play the original, you will seriously enjoy and appreciate the effort that Eidos put into making sure us fans got what we have been waiting for. The easter eggs and throwbacks to the original brought an enormous smile to my face, as did the general nostalgia I received from helping out randomers on sidequests, exploring the city hubs for loot and characters, finding different solutions to a problem and hacking computers to read people’s emails just to know more about the world and characters.

Take these words of advice: Buy Deus Ex: Human Revolution now – preferably on the PC – and enjoy one of the best games of the year and one of the best A-RPG’s ever created.

“My eyes are augmented.”