C.P.U: The Forgotten Member of the Bach Family 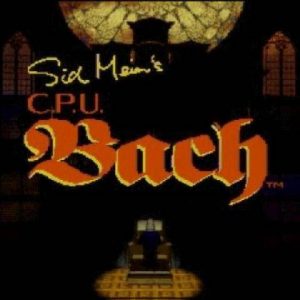 C.P.U Bach has been forgotten by most musicians. Buried deep in the bowels of history he is barely even talked about now. People who know their classical music might be thinking right now, wait – did you make a mistake? Perhaps you mean C.P.E Bach, but in that case – he wasn’t forgotten? Who is this elusive member of the Bach family?

The reason for this is that C.P.U Bach did not live in the seventeenth century, neither is he really a person, but actually is simply an educational video game. It was made by Sid Meier who most will know for the immensely popular Civilization series. In fact, Sid Meier had just finished with the first game in the Civilization series when he started work on C.P.U Bach.

So what exactly does this program do? For a piece of software released in 1994 what C.P.U Bach did was pretty ground breaking. It was essentially a Baroque music generator, wherein you entered aspects into the program and it created new compositions which it would play to you. With this you could make fugues, chorales, dances – all at the press of a few buttons. This was pretty remarkable given the fact it came a year before Brian Eno had even coined the term generative music.

The game was released exclusively on the Panasonic 3DO which probably explains why not many people have heard about it. This was Panasonics first and last venture into making consoles and not many people ever owned one. It baffles me as to why this game is only on this system but Sid Meier’s must have had his reasons at the time.

I do not own a copy of this game but from what I’ve seen on YouTube many aspects are pretty primitive by today’s standards. For a start the sounds are all created using basic midi which means that no matter how nice the composition is, the sound will be quite ugly. Also the controls and menus seem to be quite baffling.

Despite this it is good how many options there are for this game, both musically and visually. You can choose a wide range of instruments to play the generated piece, choose what style you want it written in and choose how busy the notation will be. While the piece is playing the visuals can be changed to show the score, show pictures, and even show C.P.U Bach himself playing it!

C.P.U Bach is still a quaint piece of software regardless of its age. I think it’s a shame that it’s not talked about more. Sid Meier’s himself recognised that by making this he would be “ruffling a few feathers” as he didn’t think musicians would appreciate that a computer program could make music which was the same standard as many Baroque pieces of the past.

It’s funny how bizarre games like this come to exist. It could almost not be classed as a video game but instead just another type of music program. If this could be made for the 3DO over 20 years ago who knows what we could make now with modern technology. Since it was made there have been programs and games like it, but nothing (I know of) which makes Baroque counterpoint to its standard. I would love it if a new version of this with high quality sampled sounds was released but I guess it probably was a once in a lifetime experiment for Sid Meier.

One day I hope to own this game but it is quite scarcely found. After all it is just another artefact of gaming history. It stood out from the rest but was forgotten so quickly.