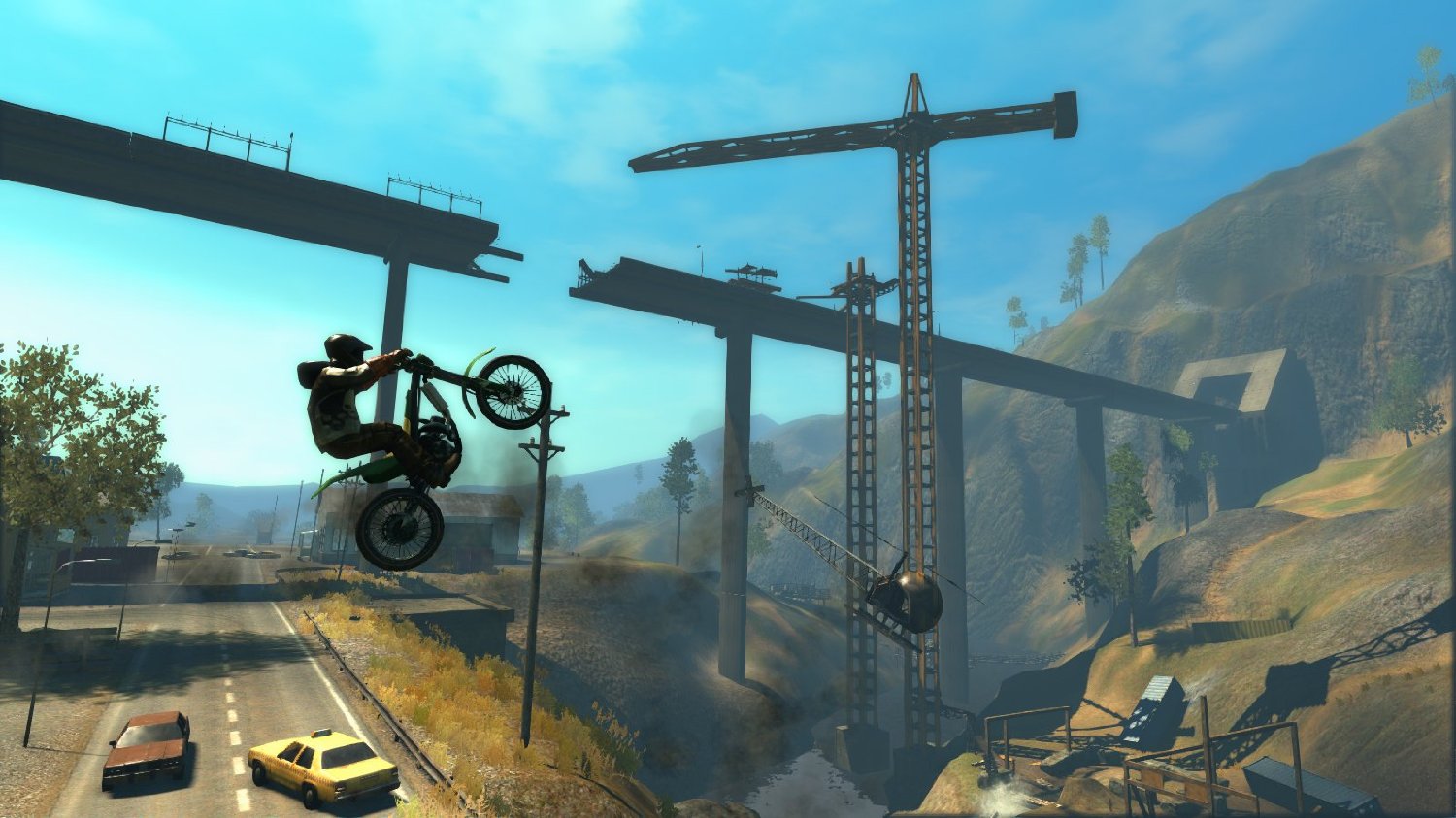 Trials Evolution is the long-awaited sequel to Trials HD, by RedLynx, and can be downloaded from XBLA. It’s been out over a year now, and I still find myself going back to it. Below are 10 things that struck me most about this adrenaline pumping game.

This is effectively a large part of Trials, especially if you’ve played other games in the series. Don’t start playing this game with the expectation of being able to breeze through each track, because you won’t. Levels are invariably designed to trip you up, and you’ll end up thinking the level is one step ahead of you during some runs, as the next obstacle flawlessly causes you to crash. This is a game where if you want to do well, you’ll be playing, and re-playing an awful lot.

I won’t lie and say this game doesn’t have its frustrating moments, but even when you are failing badly at this game, it never loses its entertainment value. Prolonged play is always rewarded, either through a hilarious crash, the ability to jettison your rider from his bike when you’re getting frustrated, or simply enjoying the white-knuckle action. Trials Evolution is not an easy game, and there will be levels that will absolutely test your abilities, your patience and your reactions to the limit. So it’s worth letting yourself go every once and a while and enjoying the failure.

The controls for the game are very simple, and it’s just as well. The differences made simply by speed, position and throttling are virtually infinite. Sooner or later you’ll need to master the controls if you want to do well at this game. Throttle control is something that can always catch you out, to the point that I’m willing to bet that most of your bails will be from over-using the throttle of the bike so much that the back wheel flips the bike onto your rider’s back.

One way that I regularly fail is after having just figured out a bit that’s been tripping me up for ages, I manage to mess up things that I’d been scorching past with indifference constantly. It’s one of the reasons why checkpoints are useful when playing for the first time, but this gets really frustrating when going for gold medals. Obstacles are always tricky, certain areas are designed purely to catch you out, and an obstacle can easily become almost impassable if you hit it at the wrong speed or angle. Never forget that the easiest way to bail is to over-rev your real wheel and hit your back. You’ll do it a lot, and a lot more if you lapse your concentration.

This will strike you even more profoundly if, like me, you played Trials HD first. The levels are astoundingly beautiful looking, intricate, and full of crazy features. There are so many different locations, with tracks using various clever, and often unique items as obstacles, ramps or just as something to look at. Just taking in the astounding designs and features can take just as much adjustment as playing the level, and sometimes more.

There are so many ways that you can progress through the track (or not, see #1), that it is almost impossible to get the same experience every time you play a track. Even though the amount of shortcuts and alternative routes are rather small, it’s quite surprising how your progress changes depending on your speed and position from previous obstacles. Getting the best run out of a single track almost invariably comes with a lot of trial and error, especially the harder tracks. You can often be tempted to go as fast as possible, but this isn’t always the best policy, as clearing an obstacle too fast can cost you a better set-up for the next one. Experimentation is key with this game. Enjoy the freedom, and don’t forget to think outside the box.

The friend ghost mode on the face of it seems like a useful thing, and it’s certainly much improved upon the version in Trials HD. But it tends to be a little misleading at times, because it makes you concentrate far too much on getting ahead of your friends at various points, rather than concentrating on setting up a good line. It can often be helpful, usually so you can see how fast your friends are going at certain points, but this isn’t always the best move (see #6). Besides, it runs your friends’ best runs through the course. It doesn’t show you the dozens to thousands of runs where they failed horribly, which can be a little painful, especially on a track that is giving you a hard time. It doesn’t help that I have friends who are exceptionally good at this game.

Once you start getting a little bit better at the game, you’ll start aiming for the Golds. At this point, the checkpoints by and large become useless (until you do the hard and extreme tracks). At any rate, you will be restarting a lot, and the best way to get used to a track is to play through it in entirety (and you’ll need to do it if you want Platinum Medals). The quick restart is an absolute godsend, and waiting for the reload isn’t as achingly long as it can be in other games. It can be a problem when you get to levels where you can use checkpoints, and muscle memory opts for the full restart. But in a game where trying again is the key to success, you’ll be thanking the game developers for the quick restart.

It really doesn’t. There are literally tonnes of levels in this game to keep you busy of varying difficulties. There are delightfully entertaining “Skill Games” that mix gameplay up a bit by offering something new (want to fly a UFO or balance a giant ball on a rig on your bike?), additional DLC with even more of both, and there are thousands upon thousands of Custom or User Tracks made by gamers just like you. You can also make your own with the track editor. There are customisation options for all of your bikes, and for your rider’s appearance. Fancy bombing around the various tracks in a bright pink motorbike wearing a centurion helmet? Of course you do!

Extreme sports games has been a bit of a mainstay in the computer games industry. I’ve always been a fan of getting the thrill out of doing extreme stunts without as much chance of breaking bones and the need to stand up and move places. But of late, many titles have just been missing something (or just awful, like Tony Hawk’s Pro Skater HD). What has been so lacking is far too much emphasis on specific gimmicks, especially “stories” where most gameplay is geared towards a specific endgoal or relegated to “side quests”. Whilst they are fun, Trials shows how it is done. Trials Evolution isn’t ashamed to offer crazy, unadulterated and classic arcade gameplay, where it’s all about the sheer fun of it, and there’s no faffing about with stories, reality or character development. It’s all about the thrill of the game. Trials gets the simple things so right, where other games can’t even get past control gimmicks and special trick bars.

So there you have it, some thoughts on what makes Trials Evolution tick. But don’t take my word for it; give it a go yourself!