The World on a Plate 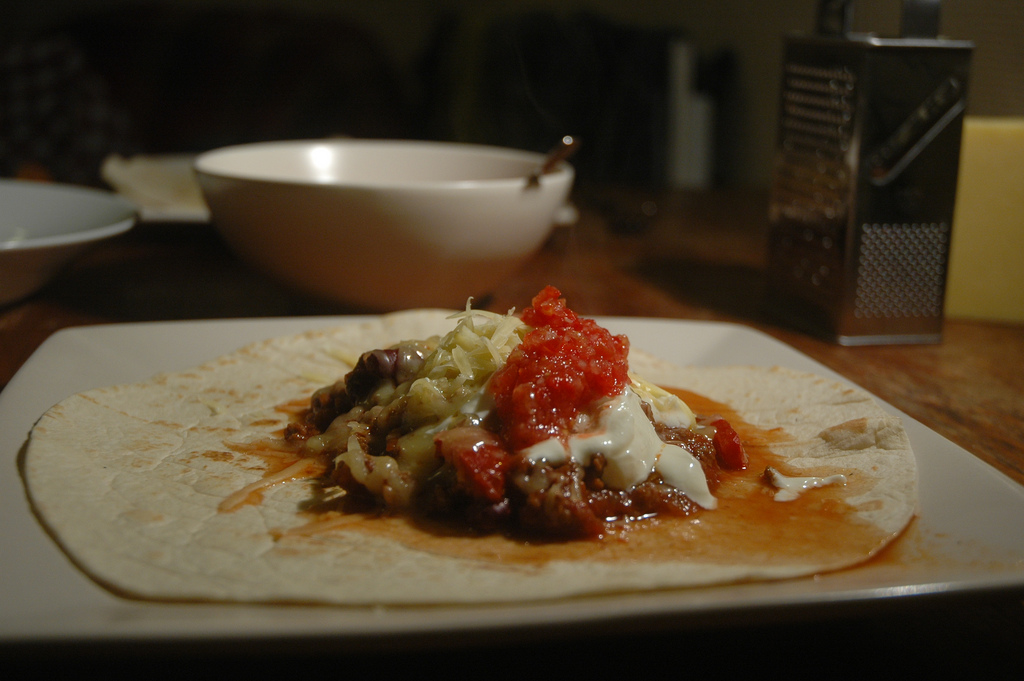 Mexican food: how did it get to our tables in the first place?

Ever since Robin Cook announced in 1997 that Britain’s National Dish was chicken tikka masala, there has been a lively debate about what constitutes British cuisine. British culinary choices and eating habits are portrayed as increasingly cosmopolitan, diverse and exciting. You want to eat a Burrito Mexican-style in the comfort of your living room? Not an issue. You fancy a quick Chinese stir fry? The local Chinese can deliver it to you in ten minutes. You’ve got a craving for a Pad-Thai? No problem, just pop along to the Thai diner down the road. We really can sample any cuisine we want, at any time or in any place.

Our eclectic eating seems to be a celebration of multiculturalism, one that rejoices in the culinary richness that immigrant communities have contributed to society. However, I would like to question the seemingly harmless replication of so-called “ethnic” food and the way in which it is advertised and presented to us by the conglomerate food corporations who are shaping our eating habits.

I recently saw an ad for Uncle Ben’s on TV. It showed a mother cooking in the kitchen; she opens a jar of Uncle Ben’s sweet and sour sauce to add to a stir fry. We cut to a band of oriental martial arts fighters frozen mid air with a Chinese-style temple in the background. They tumble to the ground and roll along to recommence their airborne arrangement around the western family’s dining table. We are then asked to “invite the world to dinner with Uncle Ben’s Sauces”. Now, you may argue that this is only an advert. But it unleashes every stereotype in the book, from the setting to the clothes worn by the martial arts fighters, to the chimes of the “Eastern” background music. Even the suburban housewife and her family are typecast and essentialized as the white nuclear unit.

Obviously, these representations are meant to be deliberately overblown and overstated. But I would argue that these depictions of different cultures only serve to compound the stereotypical, essentialized and even racist views that exist in Britain today. It is not until we unpick the seemingly benign media representations of so-called “ethnic food” that we can see the very act of eating foreign food is problematic. Foreign food has been commodified: it has been packaged and sold to us in simplified and stereotypical ways.

This may sound provocative, and I am certainly not suggesting that we are all raving racists for enjoying a spicy tortilla wrap. Nor am I arguing that it is wrong to want to experience new foods or to take advantage of the huge variety on offer to us. However, people think that they “know” authentic Chinese food without ever having visited China. In reality, would a Chinese family sit down and eat a meal like the one portrayed in the Uncle Ben’s advert? Within our society we have fed a habit of ignoring the complex and sometimes violent histories that have enabled certain foods to reach our plates. For instance, the Chinese food that we are all so well acquainted with was first created in America through contact between Chinese cooks and working-class white Americans working in the mines and railways in the 1800s. After being forcibly removed from labour markets by racial discrimination and hostile unions in the twentieth century, Chinese people were segregated into “China towns” in urban areas. In order to survive economically, they set up restaurants and redecorated their interiors to appeal to stereotypical “white” fantasies of the “Oriental” and the “exotic”. The food on their menus was not an exact replica of Chinese home cooking; instead, dishes such as chop-suey and chow-mein were created specifically to appeal to western tastes.

This kind of representation doesn’t stop at Chinese food. Another questionable advert currently on TV is the Old El Paso commercial for Mexican recipe kits. Again, the conventional method of exaggerated stereotypes is implemented. The sombrero- and poncho-clad Mexicans shaking maracas are used to represent all things “spicy” and “Latino”. Again, this is then contrasted with the white western family in their pristine kitchen, learning how to make burritos using the Old El Paso recipe kit.

This seems to trivialize the fraught history which has enabled Mexican food to reach our plates in the first place. As with the origins of Chinese food in the U.S, if we trace the history of the popularization of Mexican food we can see it was initially commodified by Americans as far back as the nineteenth century. Now it has been mainstreamed and is a burgeoning sector within the fast food industry, with chains such as Taco Bell, Las Iguanas and Chiquito’s offering us the possibility of tasting traditional Mexican meals. As with Chinese food, Mexican has been adapted to suit the palates and tastes of westerners who are unused to the spiciness of authentic Mexican food. As Old El Paso boasts on its website, “we’ve kept in all of the tasty Mexican flavours you love, but taken out the heat.”

By advertising this food in packaged and easily digested stereotypes it makes it easier for the public to consume multicultural foods without even needing to think about to how it reached us. What we assume to be authentic “ethnic” food has actually been especially created and developed for us within a specific set of cultural conditions. Adverts like those used by Uncle Ben’s or Old El Paso compound our ignorance of the complex historical origins of foreign foods; these apparently benign representations of food in actual fact reinforce racial differences and stereotypical thinking within society. By accepting the commodification of these exoticized foods we have ignored the circumstances and conditions which have enabled them to be brought to our tables, and it is only by looking into the history of such foods that we can unravel the reasons for which they end up on our plates.