The Sinking Plight of the Seas: Hugh’s Fish Fight 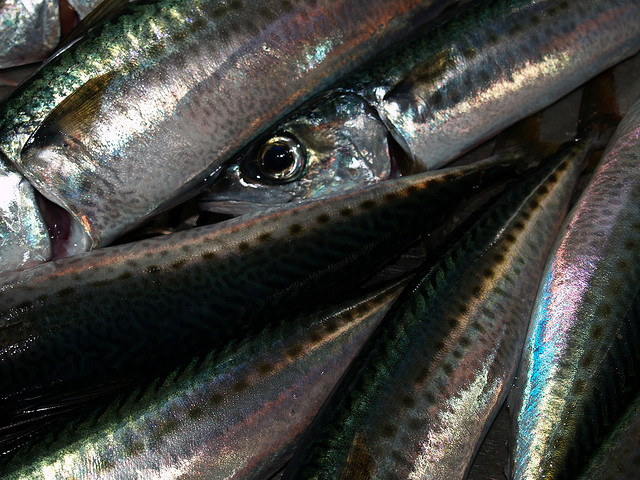 Mackerel: the oily fish that HFW is encouraging us to eat.

It never ceases to amaze me how much influence one person’s passion and drive can exert on a whole nation. It is even better when this person uses this to their advantage, and for an environmental food cause – at least that’s what my environmentalist self believes. So, when an article in The Guardian on just this kind of campaign appeared back in January, I certainly felt that it deserved my undivided attention. Unfortunately, undivided it was not in my last Epiphany term, and while having epiphanies about my dissertation I was forced to set aside Hugh’s Fish Fight until the holidays.

With the sun shining and the daffodils blooming I happily cooped myself up within the four walls of my room to watch the programme I had been dutifully putting off since January. The environmental food plight that reeled in my attention was yet another call from Hugh Fearnley-Whittingstall (henceforth HFW), our friendly neighbourhood animal activist. The premise of Hugh’s Fish Fight was that the EU’s Common Fisheries Policy (CFP) had implemented rules forcing fishermen to discard more than 50% of their catch – 1,000,000 tonnes a year of perfectly acceptable dead fish – back into seas. This had to be stopped. It first caught my attention because 1) I love food and 2) I love the environment. As I delved further into the depths of the Fish Fight I became more hooked because 3) I’m a law student and 4) my dissertation was on EU Law. Combining my two biggest interests with… well, the 12,000 words that were fast taking over my life, I caught myself up on Hugh’s line.

HFW has been famous in the past for his campaigns, notably the chicken clash with Tesco, where he led the free-range vanguard. In a similar vein, and against the same supermarket rival, Hugh is now fighting for fish in his Channel 4 documentary mini-series. Here’s the catch on Fish Fight – the UK, as part of the EU, has to comply with the Common Fisheries Policy. The EU set quotas on the amount of a certain type of fish fishermen are allowed to have on board when they land, and no quotas at all for some of the more common fish. However, when there is an abundance of one type of fish and not for another, this translates to unnecessary discards, and A LOT of it. Tuna, salmon and cod are the three main fish eaten in the UK, so the quotas are usually for the other species. Cue the birth of Hugh’s Fish Fight, and the crusade to persuade us to consume more coley instead of cod.

Overfishing has long been a problem on the high seas, which was what instigated the CFP rules to begin with. However, they failed to consider the consequences, and they established quotas for the less common fish in order to limit the fishing being carried out, but none for abundant fish. Without quotas for some of the fish caught, those reeled in by the mixed fisheries must be thrown back into the sea, dead. There is little they can do to filter their initial catch. In Fish Fight’s first episode, HFW brings out attention to this disgraceful practice, and battles to get this problem recognised by the wider political community so that it can be addressed in the CFP’s review in 2012.

HFW has the backing of the fishermen, who agree it is an outrage that in one fishing trip they have to discard fish that could feed 2,000 people. Richard Benyon, Fisheries Minister, also wants fishermen to be able to protect the stock they fish (although Hugh manages to paint a rather ignorant picture of his fishy knowledge, bringing into question his suitability for the position. But that’s a rather different question). He faces a bit more resilience in Luxembourg at the EU itself, but in true environmentalist fashion, pushes his boat forward into the crashing waves nonetheless.

Hugh also targets the fish and chip stores all over the UK, asking them to diversify their menus and put more sustainable fish like mackerel in the bellies of their British munchers. With mackerel being my housemate’s favourite fish, I see her scoffing at those refusing to swap this lovely oily vertebrate for their bland white cod. I too see no problem with pushing this fish onto the fish-and-chip-eating population. However, Fish Fight revealed that not everyone was so excited about giving up their well-known white-fleshed newspapery packet. The hot mackerel bap alternative to cod and chips (which in my opinion sounds LUSH) gained momentum, but it can’t be called it a swimming success just yet. Cue Hugh, and his promotion of these campaigns in order to save our seas. He asks us to encourage our local chippies to serve mackerel – and don’t worry I’ve checked, Bimbi’s and Stantons have already been flagged as works-in-progress.

Tesco is yet again the centre of attention, as Hugh moves onto discuss sustainable fishing methods to protect our seas. He tackles the long-known issue of tuna fisheries catching dolphins, sharks and turtles, and reducing their populations just to cram the tuna cans. Apparently, tuna labels claiming that Tesco Value is responsibly sourced are not always telling the truth. “Dolphin friendly” is not the same as shark/turtle/environmentally friendly. With 15 million cans of tuna bought all over the UK weekly, this is an evident dilemma. Princes and Tesco were flagged as the biggest culprits, but by the end of the mini-series, Tesco had agreed to reconsider its labels and Princes recently also promised to alter their fishy practices. In an attempt to promote pole and line fishing, we also see HFW attempting this sustainable practice – flicking fish off his hook and onto the shiny, glinting floors of the fishing boats. Less harmful to the rest of the underwater population, HFW also targets salmon farming practices which, although less harmful to the rest of the underwater population, nevertheless trigger alarm.

Given the success of the Chicken Out Campaign, I for one have faith in this new foodie battle. Whilst I am not necessarily an animal activist, I definitely dislike waste, which is the main premise of this. If the law is the instigator of this ridiculous unnecessary discard, then as a law student, I feel it is my duty to assess the situation, or at least keep up with it. Even more so, being an EU-advocate meant that my own vertebrae were shaken. So what can we do to help? Well, first off, consider trying different kinds of fish. This will not be an easy task. Tuna is good as far as the student budget is concerned – and I can still hear echoes of the lectures that drilled into me the importance of getting some form of omega-3. But surely there are alternatives?

Consider oily fish, like sardines, mackerel and anchovies. Anchovies, like Brussel sprouts, have a bad rap, but don’t believe everything you hear – trust your own tastebuds. Little dried anchovies, probably more likely to be found at your Oriental stores than in supermarkets, are the equivalent of fish stock granules. Understandably, this is not everyone’s cod and chips but if you seek to be more sea-sustainable, you will have to open your mind and mouths. In the case of sardines and mackerel, there’s no good reason not to cast our nets a little wider. They’re just around the corner from tuna in the supermarkets! Sardine texture is also similar to tuna, and they can be bought in a tomato sauce. You could so easily throw it into pasta. Smoked mackerel in the fish aisle is also ready cooked, and inspired by my housemate, I would recommend crumbing it into a salad for a savoury kick.

One small change by man, one giant dive (up) for the fishy kingdom. Ponder the plight; think about what you could do to help.

Watch the three episodes of Hugh’s Fish Fight on 4oD. Follow it on Facebook or just for more information, visit www.fishfight.net (clever use of the .net domain here).