The Joy of Soup – recipes to fight the winter blues 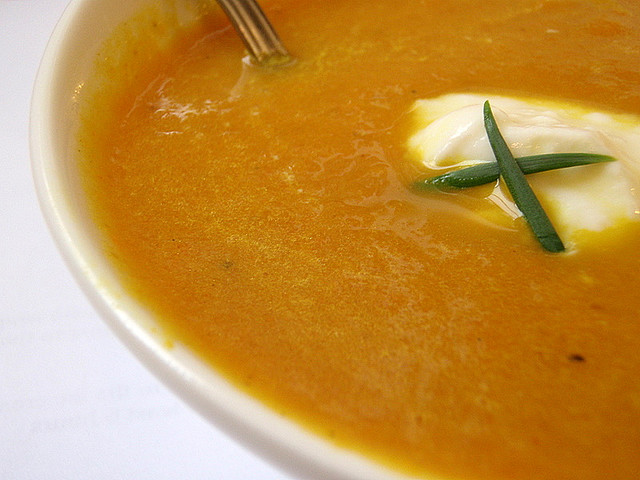 A sure way of fighting those winter blues.

Soup. An earthy, comforting word. It has such charm, only one sound short of “swoop”. And a swooping sensation in my stomach is exactly what I felt every time I smelt my grandparents’ rib-sticking leek and potato. Characteristically of their generation, grandma did the cooking, but for some reason that I’ve never quite fathomed, my grandpa made the soup. And what soup finesse! My mum loves to recount the story of how my sister once, as a child, complained that mum’s vegetable broth was never as good as his, because he cut his vegetables into perfect cubes. My poor, hard-bitten, time-constrained, working Mother. Scourge of the food tessellation fanatics.

Due to this family influence, I’ve had a life-long love affair with that most versatile of culinary inventions, soup. An unworthily underrated food. It’s a universal comforter to rival the cup of tea – tinned chicken chowder when you’re ill, winter broth when you’re cold, cuppa soup when you’ve drunk so much coffee that you can’t feel your lips and you’ve STILL not finished that essay (try it). It’s also the culinary corrector pen – just chop it all up, add some stock, maybe liquidise it, et voilà! Delicious after all. And the vast range of styles this monosyllable evokes is astounding. Thick, smooth and creamy vegetable soups. Rich bouillabaisse (don’t worry – I can’t say it either). Chunky broths. Thin oriental stocks crammed with seafood and noodles. Farm-yard goulash. Some of the top chefs, such as Robuchon, have aspired towards the ultimate “clear” soup – essentially a carefully strained colourless stock, with a perfect flavour balance. One of the best soups I’ve tasted was in a classy Vietnamese restaurant in Soho called Pho. I say classy due to the ambience of the place, but perhaps this is misleading; it actually isn’t too expensive, and they claim that their menu is based on Vietnamese street-food. Their key dishes are cauldrons of beautifully seasoned noodle soup, some spicy enough to leave even my most curry-proof of friends gasping for several minutes.

But that’s the beauty of soup – it’s not only the domain of Michelin stars and linen napkins, but also of budget back-of-the-cupboard meals and roast dinner leftovers. If you want to sample a wonderful example of a classic, down-to-earth soup here in Durham, try the Pancake Café’s Winter Broth. It’s stuffed with good wholesome veggies and a mound of pearl barley. Particularly appealing now that the cold and dark are drawing in, and a cheap, cosy meal out.

In my humble, soup-slave opinion, however, nothing beats a good old homemade soup. It’s ridiculously easy to cook, perfect winter comfort eating, and nigh-impossible to muck up! This makes it great fun for both the veteran chef and the wee student still terrified of the chopping board. Here are a couple of my favourite recipes, passed down through my family. Why not pick some veg up from one of the lovely North Road greengrocers and warm up the winter nights with these delicious toe-curlers? Don’t forget to cut your vegetables into perfect cubes…

A good basic soup recipe and very adaptable – make what you want out of it! Use whatever veggies you have left in the bottom of your cupboard, and experiment with different herb combinations.

Also a great one for any fresher’s flu that’s still lurking around, as it’s packed with vitamins and good stuff like that. Lovely out of a mug whilst curled up in bed. Add a few shakes of chilli flakes/tobasco and a bit of ginger to clear out the sinuses.

Try this if you don’t have a blender/processor. Brilliant way to get the most out of a roast chicken, but also lovely with just a couple of stock cubes instead. Best served with chunky white bread to dip in.

Makes: a couple of good hearty meals, or a light lunch for 4–6.