On a cold, winter morning when it is still dark outside and the street lamps are glowing there is nothing better then a warming bowl of porridge for breakfast. Similarly, on an autumnal evening after a meal, a crumble is just the best thing for pudding. So why not bring these delicious foods together? Think of layers of creamy porridge, tangy fruit and then a crunchy, sweet topping. To me that sounds like a pretty good deal.

There were a few things I had to consider when creating this dish. I wanted a breakfast that was nutritious and not packed with extra sugar and fat, but I was also tempted by some serious texture, with both chew and crunch – so here is my version! The porridge layer is essentially a baked porridge, so a slightly more solid-type porridge then made in a pan but still creamy. This is super simple, all you do is put the milk, oats and spices in a pot.  I experimented with the apple/fruit layer, trying it with and without sweetener and also cooked and pre-cooked apple. After much deliberation and recipe testing from my housemates (thanks girls!) I found that microwaving the apple with spices and a hint of honey produced a softer, texture and sweeter flavour, without losing the tanginess. 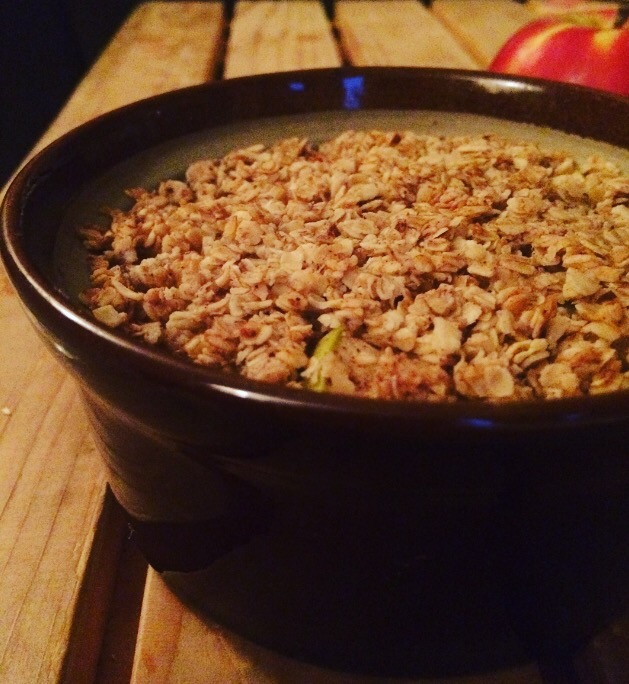 The top was definitely the most challenging part and where this breakfast could potentially go from nice and nutritious to a sugar fest. I thought about two ways of making the topping, firstly and most simply with granola as the crumble top. Although this worked to an extent as it required less cooking, I do think one of the best bits of a crumble is the texture; how the crumble topping has that balance between crunchiness but also how it binds to the filling to give an extra chewiness. The granola offers a perfect crunchiness but lacks the classic crumble chew.

The alternative, however, is to make your own granola/crumble topping. Although this sounds like an unnecessary faff  it is so simple – oats, honey, a dash of oil, salt and any nuts or seeds that you fancy. This requires longer baking then the granola top (although only 5 minutes or so) but it gave me the crunchy-chewy crumble vibe that I was looking for. This is also great because you can moderate yourself what you put on the topping; many shop-bought granolas are packed with sugar.  It truly is the best on a cold, crisp morning, wrapped up in your dressing gown. This with a huge mug of tea is a great way to start.

So here we go, my twist on porridge, combining two British dishes to make a warming autumnal breakfast – enjoy!

2 tsp oil (sunflower, coconut, butter, olive – whatever you have!)

• For the porridge place the oats, milk, water, 1 tsp cinnamon and a pinch of salt in a smash oven proof dish (about 10 cm in diameter), alternatively two large-ish ramekins.

• Chop this apple into pieces (about 0.5-1cm in length) and place in a bowl with the honey and remaining cinnamon.

• Microwave on a high heat for 1 minute, then remove and spread over the porridge layer.

• To make the granola/crumble top, mix together all the ingredients and spread evenly over the apple layer.

• Bake in the oven for 25 minutes until the crumble is golden brown.

• Best served with natural yoghurt and a drizzle of honey.

Note:  Add nuts and seeds to the topping for a protein boost, to feel fuller for longer in the day.