Searching for Sweet among Savoury 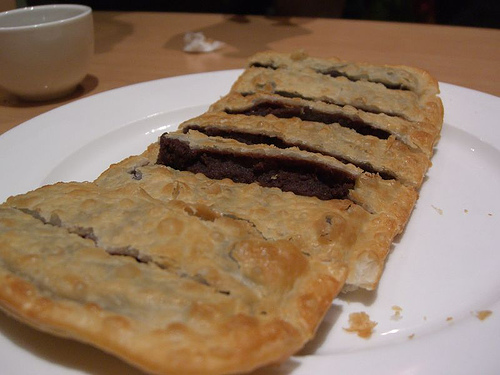 “Wo bang” is a sweet, crispy Oriental pancake, with bean paste used as a filling.

Let’s face it, the world is essentially separated into two kinds of foodies – those who indulge in sweetness, and those who choose instead to wallow in savouriness. I myself most certainly fall into the former category. I have always had a huge sweet tooth for all things children are not allowed to excessively consume for fears of hyperactivity and sugar rush.

However, as I reflect on the source of this sugar addiction, it becomes apparent to me that this is slightly unorthodox given my childhood meals. I am Malaysian Chinese, and for as long as I can remember, I was fed fruits, fruits and more fruits as a post-meal pudding. Those who dabble in Chinese and other East Asian cuisine will certainly be aware of, and maybe even disappointed with the limited array of after-dinner delights on offer in these establishments. My research uncovered that puddings and desserts in this region are few and far between, mostly restricted to the healthy and abundant selection of tropical fruits I grew up on. If there is a dessert, it is often an overly sugary delicacy. The Asian pudding selection is very strange to a Western palate, for the Asian idea of “sweet” is usually equated with adding as much sugar in as many forms as possible. This is opposed to the subtle balance found on the other side of the world.

As I consumed thrice my luggage allowance in atypical Asian Christmas food back in Malaysia this holiday, I considered whether there actually were any good desserts out there. Sure, there are a lot of sweet snacks, but they’re often not specific “desserts” by definition. They are usually purely snack foods or eaten only on special occasions. However, a good Chinese dessert pretty much came to me on a plate after one (of many) nights out at dinner. It was the equivalent of a sweet filled Chinese pancake, which I only know as “wo bang” in Cantonese. I knew there had to be at least one amazing dessert in the Orient and had finally found it. Finding this recipe, however, proved a great challenge. It translates directly to “pan biscuit” in English which was less than helpful for my Google searches. Searching frantically through cookbooks in the Malaysian bookstores was also to no avail… and my inability to read Chinese did not help me in my perusal of the pictures in these books.

I did finally find the recipe. Upon confirmation with my Chinese-literate relatives that it was indeed the recipe for wo bang, I am here to share with you my favourite slice of sweet from the Oriental part of the world. I’ve modified just slightly the original recipe to fit my own more conventional idea. It is a far removed cry from the traditional British sweeties I have become used to while in the UK, but it certainly does not disappoint in sugar levels, nor in levels of unhealthiness. Deep-frying is not my favourite kitchen activity, but this is worth it.

*this is lotus seed paste, which unfortunately is not readily available in the North. However, red bean paste can be used, which the original recipe calls for. Both Golden Pearl and Aroma Rise on North Road stock it, but personally I prefer lotus seed paste. For a fusion twist, you can try jam or any other toast spread.