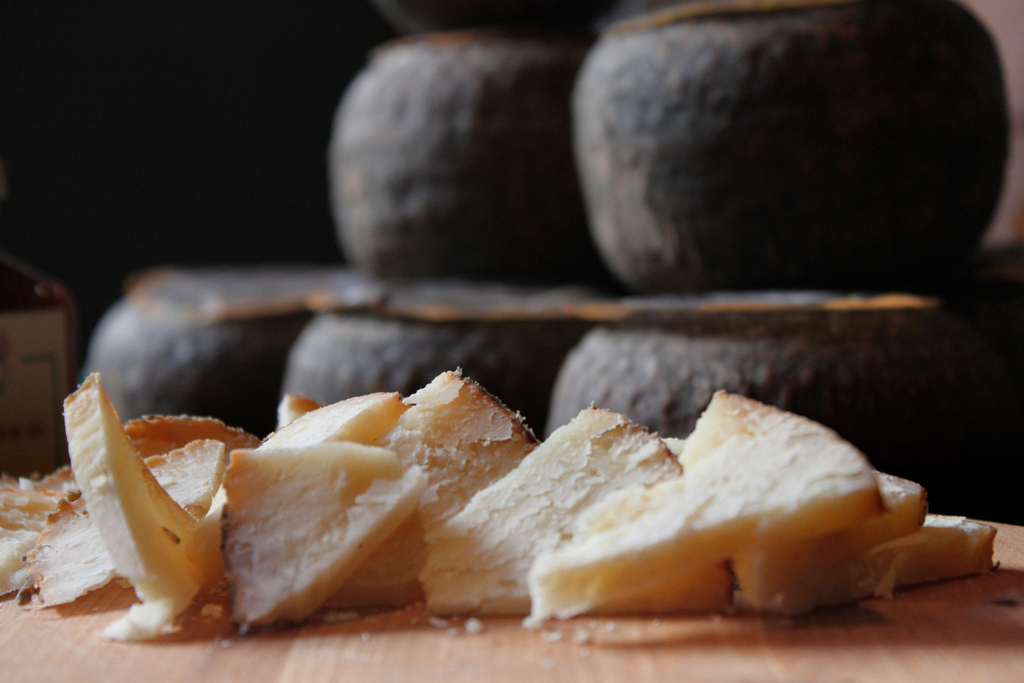 Claire shares some of her cheeseboard favourites below.

I wouldn’t be so bold as to say I’m a fan of all cheese. Blue cheese sets my stomach on edge; unless I am previously given permission to embarrass myself and everyone else on the dance floor, then cheese music isn’t my thing either. But as a general rule, I can’t get enough of the stuff. And I think I’m brave enough to say that a lot of people are of the same opinion. It saddens me that for Durham livers-in, all too often, it is hard to get your regular fix of the (other) white stuff. On a day-to-day basis I have to make do with some grated yellow strands which, mixed with enough tomato, cold meats and mayonnaise go some way to satisfying the daily craving. But every now and again I crack. My French blood gets a-pumping and, against my better judgement, drives me to the supermarket cheese aisle, where my need for a hard calcium fix ends in a feeding frenzy of the sort Wallace and Gromit would be proud of. When I lived out in a house with five other cheese aficionados, these rampant splurges were avoided by regular all-weather cheese toasties, but nothing can quite measure up to a good old fashioned ‘cheese-up’.

You may have picked up on my earlier allusion to my French heritage. Indeed, I often attribute my cheese snobbery to my mum’s country of origin, and yet the irony is that she is allergic to cheese. Rarely would we have it in the house, and even more rarely would I be encouraged to eat it. But my beret-wearing grandpa would rarely be seen without a chunk of pungent homemade ‘Beaufort’ between his wood-chopper’s – and tragically, on one occasion, wood-chopped – fingers. I don’t think I can go too wrong in saying that there is good cause for the French to lay claim to the greatest cheese nation: with upwards of 350 varieties of cheese, classifiable in eight different groups according to texture, animal origin and rind, there is something to please everyone (except perhaps my mum). The often-lauded and sometimes-demonised former French president, Charles de Gaulle once protested “How can you govern a country which has two hundred and forty-six varieties of cheese?” It’s quite easy. Let them eat cheese.

Traditionally, at the French dinner table, the cheese platter comes before the pudding, and will be passed around the table with a basket of fresh baguette chunks, perhaps some fresh green salad dressed lightly with a tangy vinaigrette and served with the dregs of whichever wine has already been opened. There will ideally be a mix of hard, soft and goat’s cheeses, and categorically NO butter. Some personal favourites of mine:

A semi-firm cheese originating from the French Alps, this nutty cheese with a distinctive brownish-grey rind will transport you to the mountains of its origin, where it matured for at least ten months before reaching your knife. All that’s needed to enjoy this, and ensure that you finish off the full, seven-inch wheel, is a fresh baguette, a French saucisson and ideally a cow bell, for the full alpine experience.

Several varieties of this soft, flat goat’s cheese can be found in the south-western Pyrenees, where it is customary to finish off a meal of foie gras or duck and bean stew with a few dollops of slightly-melted (by the summer sun, ideally) Cabécou. The lush vegetation and berries which the goats graze on in the rolling hills of the Dordogne gives it its deliciously milky, creamy taste.

A common feature on tables and picnic blankets around the world, this export from northern France has a place close to the hearts of many a Gallic gastronome. Its snow-white surface melts on the mouth with a stroke of powdery creaminess – unfortunately, the famous round wooden box with which it has become associated can all too often attack your hand with the stab of a painful splinter. Its major claim to fame is that it was the official cheese issued to French troops during World War I.

Green salad (a mixture of Batavia, romaine and loose leaf, or according to preference)

Put the baguette slices under the grill until warmed through and slightly golden, but not toasted. Remove from the grill, top with a slice of goat’s cheese and return to grill until cheese is slightly melted, and bread is nice and golden brown. (Vary amount of cheese according to desired cheesiness).

On each plate, make a full bed of clean green salad. Spread out several thin slices of tomato on top, in a circle.

Slice the pepper into thin, long strips, and add to the plates, and repeat with the avocado, making sure that all the vegetables are evenly spread. Drizzle with vinaigrette.

Lay 3–4 slices of goat’s cheese baguette on top of each plate of salad, scatter plates with walnuts and drizzle honey over cheese and bread and serve whilst the cheese is still warm.

Start with the mustard and shallots in a bowl, and slowly add the oil, until you have a smooth, semi-thick sauce, mixing quickly and firmly with a fork. Add the vinegar and mix well.