Saturnalia: The origins of Christmas?

Saturnalia is not a festival I would expect many to have heard of. As a bit of a history geek myself, however, I decided to do some research into it and discover why some scholars perceive this pagan festival as “the origins of Christmas”.

Saturnalia continued to be celebrated into the fourth century AD, when the Roman Empire came under Christian rule. In this light, we could perceive certain modern-day Christmas traditions as deriving from the customs of Saturnalia:

Gift-giving, decorating homes with wreathes and greenery, tree worship, singing… Saturnalia and its pagan rituals could have been the origins of mid-winter merry-making.

The festival ultimately revolved around the banquet as, like Christmas, Saturnalia was a time of over-indulgence.

The Ancient Roman diet has obvious similarities to our modern day Mediterranean diet, particularly the Greek diet. Pork was the most popular meat, and common main courses were roast wild boar or spicy sausages, although fish was perceived as the more sophisticated delicacy.

The Ancient Romans centered their cooking around five key ingredients: 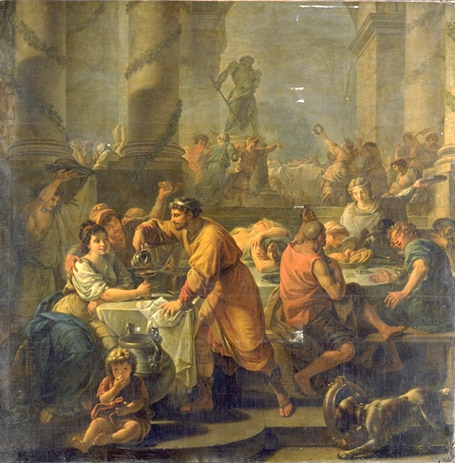 So, after all my research into Roman cooking, I decided to try and re-create a mini-version of what I can imagine they could have eaten during Saturnalia:

This spread is a delicious appetizer, served with a warm loaf fresh from the oven. This method if based on Naso’s Song, but I used just one garlic clove instead of three, or i’m pretty sure it would have been inedible!

A handful of fresh coriander, chopped

Add all your ingredients to a food processor, making sure the celery is really finely sliced. Grind the ingedients together, until the consistency is smooth.

Transfer to a bowel, and top with fresh coriander and pepper. Serve with warm bread, the spread works well on ciabatta or any seeded loaf.

Tuna was a delicacy in Ancient Rome, a fish that was very likely to have been the centre piece at any Saturnalia banquet. The mint, vinegar and capers offer a complex balance of flavours which surprisingly complement the tuna beautifully.

2 tablespoons fish sauce, or alternatively make your own: mix vinegar with anchovy paste

Marinade the tuna in the fish sauce, olive oil, capers, mint, pepper and lemon juice for an hour or so before cooking.

Heat a medium-sized skillet with oil. Sautee the shallots on a low heat until they start to golden.

Make a space in the middle of the pan, and add the tuna steaks. Turn the heat up to medium and fry the tuna for 4–5 minutes.

When it starts to brown, flip it and brush with the marinade.

Fry the other side, flip then repeat. Make sure not to over cook the tuna, check the middle to make sure it is still slightly pink.

Serve with the remaining marinade and the onions.


This is Ancient Roman twist on the classic green side salad, only packing a lot more punch. The unusual combination of mint, leek, coriander and parsley actually works very well, creating a really zingy fresh flavour.

A large handful of fresh coriander

A large handful of fresh mint

Start by slicing your leek: cut the head and end off the leek, and remove the outer layer. Slice down the center of the leek, then chop in half. From there, it should be easy to slice into thin layers.

Chuck into a big salad bowel, with your chopped mint, coriander and parsley. Crumble the feta over your greens.

Mix the balsamic, oil, lemon juice and pepper in a glass. Pour over the salad and toss well.

Lentils were a common Ancient Roman ingredient, often used as an accompaniment to a main meal or as a snack with bread. They were traditionally seasoned with vinegar and sea salt, and the addition of leek and coriander in this method complements with pan-fried tuna recipe perfectly.

A handful of cherry tomatoes, chopped

Rinse the lentils in cold water in a sieve. Transfer into a sauce pan, and cover with three times the amount of water to the lentils.

Bring the water to the boil, then simmer on a low heat for 25 minutes.

Check the pan every now and then to ensure that the water has not evaporated.

After about 20 minutes, add your leeks to a frying pan with a little olive oil. Gently fry for a few minutes until the leek starts to turn golden. Add a handful of coriander and allow to gently fry in the oil.

When the lentils are cooked, drain and transfer to a large bowel. Mix in the leek and coriander.

To finish, crumble over the feta and mix in the cherry tomatoes.

Season with sea salt and pepper, and top with fresh coriander. If serving as a side with the pan-fried tuna, garnish with a lemon wedge.