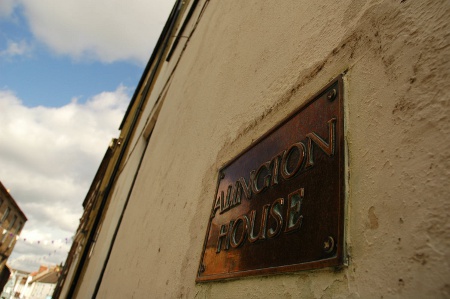 As a vegetarian, I was delighted to hear about the arrival of a new exclusively vegetarian restaurant in Durham. The aptly named Veg Den is truly a haven for all those seeking a unique-tasting, deliciously fresh meal regardless of whether you usually eat meat or not. Even if I did, in Veg Den I wouldn’t miss it one bit.

Negotiating the road works that seem to have swallowed Durham over the summer to stroll between Sadler Street’s historic buildings, it was with the sound of the pneumatic drill still ringing in my ears that I approached the unassuming chalk board announcing the entrance to the restaurant.

Located just inside the entrance to the quaint Alington House on North Bailey, just five minutes’ walk from the city centre and university lecture theatres, Veg Den is ideally situated. Having opened back in May this year to coincide with National Vegetarian Week, the restaurant-come-café is, as yet, a gem undiscovered by the student population.

Mercifully free from the often-intimidating atmosphere of the newly opened restaurant, the cosy, friendly feel of Veg Den couldn’t have been more welcome. It is truly a place in which to escape from the stress of everyday life: the lazily flickering candles are warm and reassuring in the evening and the subtle background music is relaxing while you wait (but ever so briefly) for your meal. The vibrantly-coloured tablecloths covering homely wooden chairs and tables exude simple welcome and comfort. And Veg Den has no pretensions of grandeur; from your table you can both see and hear the kitchen and the chef himself presents you with your meal. Rather than the kitchen feeling intrusive however, the whole set-up is intimate and the manager so friendly that the atmosphere is that of good-natured cooking among friends.

Given the size of the restaurant (it has room to seat about twenty-five, maximum) and the sparsely-equipped kitchen (it is that of a community centre), the wide choice offered on the menu is impressive. Enticingly described on the Facebook page as “fine international vegetarian cuisine”, the selection of food on offer reflects Head Chef and restaurant manager David Allen’s international cooking experience. Having spent half a century as a chef in locations as far-flung as Australia and South Africa, and twenty years of that as a vegetarian, his expertise and passion for food is evident. From Indian-inspired curry and Japanese-esque stir-fry to American-style tofu burger or Spanish chilli “noncarne”, the menu has dishes to tempt every palette.

The soupe du jour for which I opted as starter was red lentil and coriander. Thick and rich, this would make a nutritious and warming lunch in itself between lectures on a winter’s day. The lentils, packed with essential vegetable protein, are given a herbal twist by the addition of the fresh coriander. The steaming soup was accompanied by a plate of sourdough toast. Famously used as a bread-bowl in San Francisco, the sourdough had been toasted with garlic, herbs and salt, creating a contrasting but complementary accompaniment to the more mildly-flavoured soup.

For my main course I chose a noodle stir-fry with tofu. Although in restaurants it can often be a soggy disappointment of limp noodles and wilted vegetables, I was tempted to trust my instincts and give it a go. I was undeniably rewarded when in front of me arrived a bowl of plump, succulent noodles topped with cooked-to-perfection vegetables complete with some of their crispness. Again the meal was marked by a contrast in flavours; this time soft, creamy tofu was emphasised against the sharp saltiness of the noodles’ soy sauce. However, at times the salt was a bit too overpowering, hiding the perhaps more exciting and authentic tastes hoped for in a stir-fry such as ginger or garlic. But what the dish lacked in diversity of flavour, it more than made up for in the impressive variety of vegetables it included. But given the option of consuming it authentically with chopsticks, an invitation which I accepted in order to do justice to the food, I thoroughly, although somewhat inelegantly, enjoyed my meal.

Meanwhile, my boyfriend’s palette, filled with the spices of India, was hundreds of miles distant. Whilst I sipped my steaming soup, he chose Pakoras – bite-size fried parcels of potato, peas, carrots, chick pea flour and spices – accompanied by a spiced yoghurt dip. Of course I had to try some; the dish’s warmth was created by the mild chilli powder amongst the spices. Next, unlike me, he stuck to the same county and followed the Pakoras with an Indian vegetable curry. A far cry from the tongue-burning and oily take-away specimen, the flavours of this curry were subtle and creamy. Both roti and dahl to accompany the dish turned it into a feast and I particularly loved the dahl – authentically made from chunky lentils – which provided the protein in this meal. My (non-vegetarian) boyfriend was quick to praise his curry.

Chatting to friendly David Allen afterwards, he explained that he makes all of the food himself – right down to the Mediterranean pizza bases – freshly every day. Fresh ingredients are used and all options from the menu can be made vegan. He is also happy to cater for all individual dietary requirements, making the restaurant one of the most inclusive and customer-friendly in the city. Open also as a café, Veg Den serves a wide selection of teas; a healthier and increasingly trendy alternative to coffee, as well as fruit juices and cordials.

Surprisingly, Veg Den is the only truly vegetarian restaurant in Durham. The city’s vegetarians are extraordinarily badly catered for which is astonishing given the considerable presence of vegetarians at least among the student population. The only eatery that could have claimed vegetarian status previously was Falafel Alhana (on Claypath) but it lost all claim to this title when it began serving meat a year ago! Although it is true that all restaurants include a few token vegetarian options, it is increasingly irritating constantly to be faced with only a minimal, unexciting selection. As a vegan, the choice can only be more limited and frustrating and it is a wonder that this niche in the market has not been filled before now. Frying or roasting in animal fat, the addition of gelatine and the presence of non vegetarian cheeses (containing rennin) are just some of the factors that limit the vegetarian choice yet are not always highlighted on the menu. It’s hard to be certain what you’re eating.

Mr Allen believes that “people who are vegetarian or vegan tend to search out places that cater specifically for them.” And no wonder, since from the moment you enter a specifically vegetarian restaurant such as Veg Den, where the chef proudly announces his twenty years’ experience as a vegetarian cook, trust is automatic. Diners can enjoy their meals untroubled by conscience and confident in the knowledge that their dietary requirement has been specifically catered for. Although the international menu seems rather ambitious for a small community centre based restaurant, its motto: “simple, humble and cooked in consciousness” sums up its unassuming, ethically-sound basis.

A word about the price; at £5 or less for a main course it is well within the student budget and the food is worth every penny. Veg Den offers a refreshing escape from the restaurant chains that smother Durham city centre and as students flock back to the city, it is sure to become a regular haunt. With 1st October marking the beginning of Vegetarian Awareness Month, now is the perfect time – whether you’re vegetarian or not – to pay the restaurant a visit. See you there!