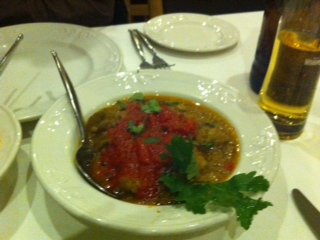 When walking through a tiny alleyway behind the Church in Market Square, the last thing you would expect to find is an Indian restaurant – but this is exactly where you’ll find The Spice Lounge. With a riverside view and tranquil surroundings, the location of this rather quaint Indian restaurant is quite lovely. Unfortunately, the only downside to such a hidden location is that it was exceptionally difficult for my boyfriend and I to locate, prompting me to call the restaurant for directions – and I have to say they were both helpful and friendly when called.

The service was prompt upon arrival – but what struck me first as the waiters showed us to our table was how incredibly minuscule the restaurant was! Despite this being the case, it is not an overcrowded restaurant, and still maintained a sufficient level of – just to be very pretentious- ambiance. In other words – it’s not too crowded for a quiet romantic evening. As we were in a bit of a hurry (running fashionably late to see the marvelous university production of ‘The Importance of Being Earnest’), we were both grateful for the speed of the service: both the taking and delivery of orders was surprisingly speedy.

First to come were the sides – a standard order of naan bread and pilau rice. The naans were well cooked, thankfully not overdone (a travesty if that ever happens!), with a good amount of butter to soften the texture. The pilau, on the other hand, was far less impressive: simply basmati rice with several colourings added, unfortunately lacking in the subtle fragrant flavours of say, cumin, cardamom or even cinnamon that may feature in an authentic pilau rice dish. That being said, there was nothing overly objectionable to the rice, just that it had the potential for being much more special.

Now onto the main dishes – a chicken tikka curry and a lamb Rogan Josh. The lamb was beautifully slow-cooked, tender and not at all chewy –we all know that jaw ache is never a good result from a lamb curry. Unfortunately, the curry sauce was distinctly average, dominated by an overly sweet combination of cardamom and what I believe to be cinnamon, which did not compliment the lamb as well as it could have if those flavours did not overpower it. As a self-confessed chilli wimp, it is saying something when I feel the need for greater heat in a dish and it is fair to say that the lamb –supposedly medium hot –needed a kick to give that edge and to contrast with the overly sweet flavour of the Rogan josh sauce. The chicken dish was rather better; the chicken was moist and retained the flavour the tikka marinade. The use of coriander created a fresh taste and the onions added a sharp acidic bite that complimented the otherwise quite plain curry sauce that did not seem to add an awful lot to the dish – sadly getting lost in the power of the tikka. Neither of these dishes were offensive in taste, but at the same time they did not dazzle.

All in all, The Spice Lounge is in a wonderful location, tucked away mysteriously behind the hustle and bustle of market square next to the Wear. The service is prompt and the waiters were fairly amiable – not to mention the prices of food and alcoholic drinks are very reasonable and recommended for those on a budget (which, let’s face it, is all of us). The curries, however, were distinctly average –and to sound like my very Asian grandmother- a bit bland. That being said, while they lacked any sort of spark, they did not taste particularly bad, and for that I give the Spice Lounge 3 out of 5 stars.