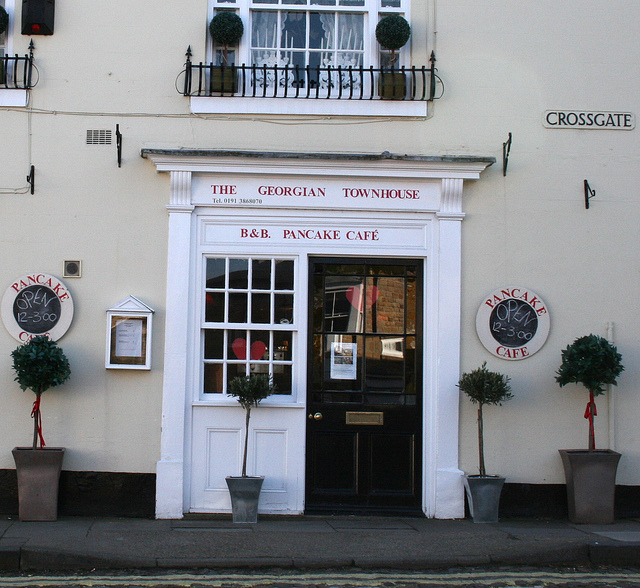 Eating pancakes can be factional and fractional. Bitter battles over batter: one egg or two, cardboard thick or paper thin, lemon and sugar or Nutella, butter or oil to grease the pan. If you find yourself in the situation where x = number of pancakes cooked and y = number of guests and x/y = a non-integer, you’ll be creating batter pie charts to reach equality. It’s the classic case of the simplest recipes causing the greatest debates. To open a pancake café is to enter the fray.

Now before I start critiquing the food, I need to make something clear: I enjoyed my lunch. The service was attentive, the décor disarmingly and charmingly kitsch; after an hour of sitting on the wooden benches I can attest that the furniture is comfy and the company was pretty good too. The food was fine, but only fine. I ate everything on my plate, it’s just that there were several things wrong and I went there to find them so I can only be honest. Right.

If I ever see asparagus on sale or on menus outside of its short spring harvesting season, I begin to worry. My smoked salmon and asparagus pancake was therefore up against it and didn’t really deliver. The fronds were too dry and a bit tough and the salmon had become warm and flaky inside which meant the dish had lost the contrast of textures and temperatures its title had promised. I had to work quite hard to get the flavours working together in each mouthful – different combinations of lemon juice, hollandaise sauce, salmon and asparagus – and I’m not sure I really succeeded.

The feta cheese (why feta cheese? It’s like saying brie cheese) mushroom and spinach filling was much more successful and the serving was generous but any feta flavour was swamped by a thin creamy sauce that had flooded the plate. The third dish we tried was Mediterranean roasted vegetables with pine nuts and basil – a slight case of mis-advertising as the pine nuts and basil didn’t really surface. The problem I had with the vegetables, which were nice enough, was that their flavours had merged into a kind of “I’m not sure what kind of vegetable I am/was but I know I’m roasted” mixture. The aubergine was only just distinguishable from the courgette by sight, and at the end of a mouthful’s flavour.

It’s difficult to fault the sweet pancakes as their fillings were fairly easy assembly jobs (banana, cinnamon and honey, lemon and honey etc.) and more or less delivered on their titular promises. The issues here, however, were ones that I’d been trying to ignore for the rest of the meal. Being armed only with a spoon by now, the toughness of the pancakes was even more evident. The chef also seemed to a have a predilection for sprinkling – dried parsley over my savoury course had now been replaced with an excessive covering of cinnamon which gave the dish a slightly unpleasant graininess. The lemon and sugar version was perfectly accomplished, though this was mainly because it was left to the diner to assemble. One way of avoiding customer dissatisfaction, I suppose.

This was definitely a case of the atmosphere managing to save what was otherwise a pretty average lunch, although I was the most negative of our group. The place survives on its concept because it is in essence a good one, and I’m sure it’ll survive much longer thanks to the inflated prices (over £7 for flour, egg and milk with a filling). It just seems like there is a lack of attention to detail in the cooking which has let good ideas slip into ordinary ones. Even if I wasn’t very impressed with the food, others in my party were more so, and I should mention that they were very good at serving half pancakes when asked – no contribution to our great pancake debate then: still factional and fractional.