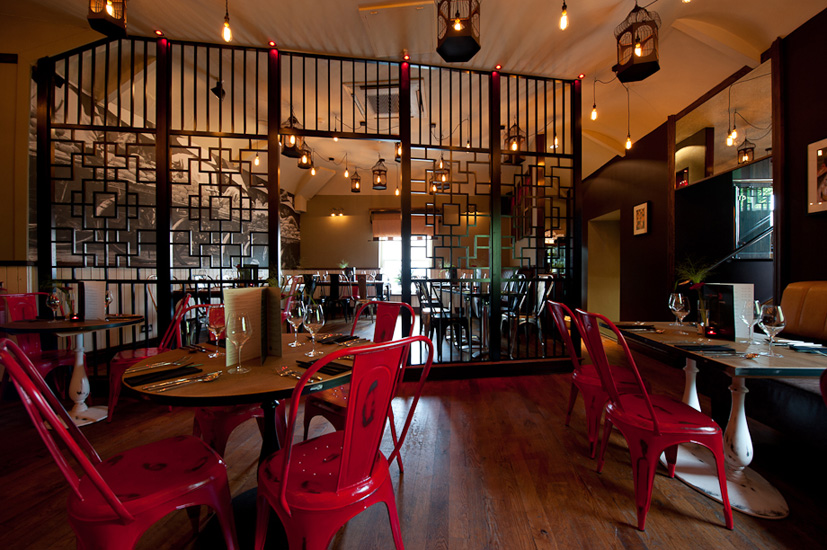 The cool interior of the Lotus Lounge

As a picturesque northern town famous for its cathedral and historic marketplace, Durham isn’t an obvious hub for high standard Pan-Asian cuisine, particularly when the population comprises primarily of apparently hard-up students and middle-aged tourists who are likely to opt for more traditional fayre. Yet Zen and Fat Buddha have become well known in the North East for their sophisticated ambience and excellent quality food. Add into the mix Central Thai, Inshanghai and – albeit offering a cheap-and-cheerful version – Woksupp, there can surely be fewer towns with a greater ratio of jasmine rice per member of the population. So it’s hardly surprising that my first thought when I discovered that a new venture named the Lotus Lounge was being developed on Saddler Street was “do we really need another Asian restaurant?” A new eatery, great, but something different would have been nice: a currently fashionable South American steakhouse, perhaps, or a Middle-Eastern offering.

Being the oriental food lover that I am though, my scepticism did not stop Lotus Lounge being the destination for my first meal out when I arrived back in Durham. A quick browse of the website did nothing to dispel my suspicions that this business, with an outlet already in Yarm, was merely jumping on the Zen/Fat Buddha bandwagon. Tempting cocktail menu? Check. Exotic, rich colour scheme? Check. Food served on an assortment of shaped plates in various little bowls and baskets? You guessed it.

Yet on entering the establishment, I was taken aback. Lotus Lounge had an altogether more relaxed feel to it than its aforementioned competitors. The décor was predominantly shabby-chic with metal chairs and a wood panelled bar, but with touches of luxury thrown in, such as comfy leather sofas and a striking array of bird cages hanging from the ceiling. The overall effect felt very current and less alienating for student visitors like myself than the imposing grandeur of Lotus Lounge’s competitors; less polished but more fun. My only query would be whether I would have such a positive view of the décor in the evening: I suspect that the Lotus Lounge will not become a first choice destination for celebratory diners, whilst the atmosphere does not reflect the high prices for wine and spirits advertised on the drinks menu, including a bottle of champagne for £450, surely intended to appeal to a high-end business clientele.

The service we received was not outstanding, but perfectly satisfactory. Whilst it was difficult to catch the waitresses’ attention to ask for the bill, we never had to wait too long for anything. Unlike the haughty reaction we received on asking the same question in Zen, Lotus Lounge’s staff were happy to provide tap water: a considerable positive in the eyes of students. In fact, the whole meal was excellent value, making a lunchtime jaunt to Lotus Lounge an ideal option if you are on a tight budget. Our whole meal came to less than £20, despite the obvious quality and presentation of the dishes. Do note, however, that the evening menu is more expensive, with mains averaging between £12.95 and £16.95. The price rise is reflected, however, in the offerings: the Malaysian monkfish and oriental Gressingham duck platter sounded especially mouth-watering.

The menu was certainly varied, with many appetizing choices. I was particularly attracted to the Asian tapas, of which three options could be selected for £9.95. The diners at the table next to us enjoyed a selection with some drinks, and all looked delicious. On the contrary, I was a little confused by the number of continental and American dishes available. As with the décor, Lotus Lounge seems unsure exactly what it wants to be. I mean, who would go to a restaurant advertised on its own website as ‘a mixture of finely crafted culinary delights brought to you from China, Japan, Malaysia, Thailand & Vietnam’ with an expectation of ordering bangers and mash or penne carbonara? Whilst I can slightly more appreciate the attraction of a varied sandwich selection to a lunchtime clientele, I cannot imagine that chefs specialising in stir-fries and noodles would make an omelette to rival a student creation!

I eventually decided upon the duck pancakes. I was quite excited to be able to choose one of my favourite foods as a main course: usually it makes an appearance only on the starters menu as a whole or half duck, meaning that I have to try – and often fail – to persuade someone to share with me. The dish was beautifully presented, with the duck and pancakes enclosed in a traditional bamboo steamer. The meat was perfect: extremely tender and, unusually, marinated, making it wonderfully tasty to enjoy without accompaniment. This was just as well, since the rest of the meal was somewhat of a disappointment. Call me puritanical, but I felt that the dish was unnecessarily altered,with negative impact. Instead of julienned cucumber and spring onions, I received a sort of Asian salad, also including carrots and lettuce. The hoisin sauce was like no other I have ever tried; whilst I understand that it can differ substantially between brands and origins, I couldn’t help feeling that the strange spicy taste of this one lay beyond normal variance. I was unimpressed at the inclusion of sweet chilli sauce: very nice, but it shouldn’t be necessary in this meal. Finally, the ratio of pancakes to meat was far too low. I was unsure whether to be pleased at the plentiful serving of duck or annoyed at my lack of pancakes. After sampling my companion’s meal I came to the conclusion that I made the wrong menu choice. He opted for the Shanghai noodles with chicken. Though not as intricately presented as mine, he received an appetizing-looking portion of very thick, fresh tasting udon noodles served with a plentiful array of vegetables and chicken strips. The sauce, similar to an oyster sauce, was extremely tasty but not too spicy… I had definite case of food envy!

So… the answer to my original question. When there is already such choice, the simple answer is no, Lotus Lounge was not an essential addition to the town’s culinary scene, especially in light of its insecure self-identity and numerous flaws. But just like introducing another pair of Christian Louboutins to Victoria Beckham’s wardrobe, or the addition of Gareth Bale to the Real Madrid dressing room, when the standard is this high, another Asian option in Durham can be no bad thing. If you fancy a slightly more relaxed, but still good quality and special, taste of Asia, give Lotus Lounge a try today.