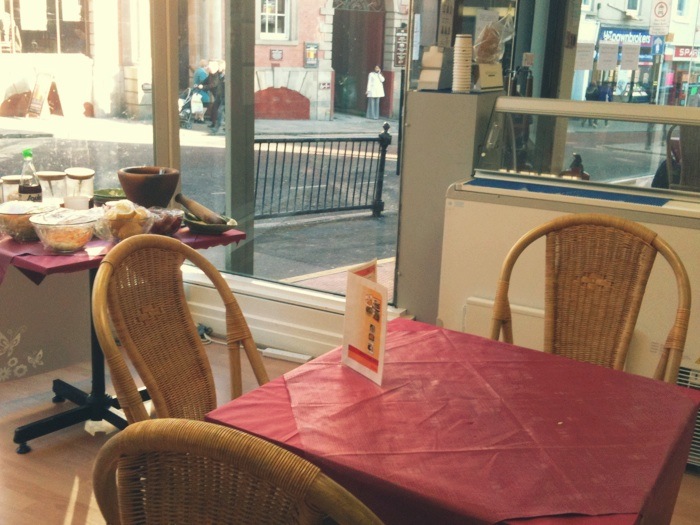 Golden Pearl is not only a convenience store, but also a café. Image: Hui Tsao.

Below the large, bordering on outlandish “Golden Pearl” sign along North Road is Durham’s well -known Asian convenience store. What is sometimes overlooked is that beside the rows of Asian supplies is a modestly run cafe. Set in a cozy corner at the side of the convenience store, the layout is simple but homely. However, do not underestimate its humble appearance because the food is surprisingly delicious. The prices are also very reasonable with a meal costing about £5, drinks inclusive. For reasonable and tasty Thai food, this is definitely the place to go.

The only criticism or incentive would be the element of “surprise” whenever you go there. Each day, new dishes are served and it is hard to tell what type of food will be available the day you decide to take the trek over to North Road. But if you’re flexible, let yourself be pleasantly surprised by the new dishes they have to offer each time. I’ve been there four times and each time I’ve gone they have never served the same thing twice. So do not be worried about getting tired of the food, despite the variety on the day being very limited. There are usually three choices to choose from with one being a vegetarian option. All can be eaten with or without rice. Although you can never be certain of what will be offered, it is guaranteed that whatever is on offer that day is bound to satisfy your taste buds. How could you go wrong with £3.50 meals served on delightful leaf-shaped plates? The portions are a good size, though maybe a little small – but only because you’re just hungry for more. Not to worry though, because you can get a larger portion of rice for an extra £1. Some recommended meals include the Chicken Masamon Curry, Thai Green Curry and Spicy minced pork with ginger. Be sure to try those if you ever see them on the menu!

The drinks menu, for better or for worse, is constant. This is where Golden Pearl falls short on its otherwise superb dishes. The drinks on the menu are sweet to a fault. The Thai milk tea has far too much sugar and the other cold drinks on the menu, for example mango juice are nearly equally as sweet as each other. It would probably be a better option to compliment the food with a hot drink (which are mostly cocoa or coffee based drinks) if you do not have a sweet tooth. Although that does not, in my opinion, compliment the aromatic flavour of Thai food. Then again, the drinks cost, on average about £1.50 so it is hard to go too far wrong for the value you are getting.

As compared to other Thai cafes or restaurants in Durham (such as Zen which serves Thai food for nearly triple the price), Golden Pearl is definitely a winner if you are on a tight budget. Of course unlike Zen, you do not get the benefit of being able to choose from a wide variety of dishes or sampling signature Thai dishes such as Phad Thai. However, if you’re looking for something quick, simple and cheap, Golden Pearl gives Zen a run for its money with its food being equally as tasty, if not better for a lower price.