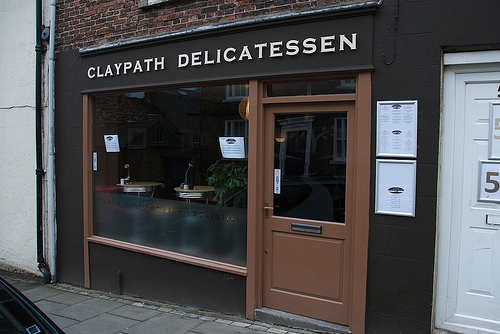 This is the best espresso in Durham. This is a slap in the face coffee. If there are other proprietors who would like to challenge me on this, please do not hesitate to do so but I warn you: your espressos will be cowering below their cremas. As if I needed confirmation, my coffee-hating friend remarked: “that is the most disgusting thing in the world”. The espresso was pointing towards a fine dining experience but the background music was already off-putting. Not the Claypath Delicatessen’s fault but due instead to my embarrassing teenage obsession with Morcheeba – hearing them again was making me blush involuntarily.

The place’s location might prevent the lazier half of the university ever going there but it does provide me with a nice metaphor: its physical elevation above the city’s other cafés symbolises its gastronomic elevation above them too. This deli could, nay should, claim to be the pinnacle of lunch in Durham. You may not believe me until you’ve eaten there but please, get an espresso down you, or a spoonful of quince jelly, or a bit of bread and balsamic vinegar and then I shall pick you up of the floor (you’ve fallen off your chair it’s so tasty) and you will tell me I am correct.

Perhaps I’m being a bit histrionic here – time for some more evidence. The first plates up were the sandwiches. The Spanish parcels, a trio of grilled majorero cheese and quince jelly wrapped in Serrano ham on a fresh salad and toasted olive bread fell right in the centre of a sweet-sour-salty Venn diagram I had constructed for the occasion. The warmed goats cheese with baby fig and apple chutney, mixed salad and walnuts on toasted bread very successfully avoided a common shop-bought cheese sandwich trap: placing a great lolloping chunk of the chosen cheese in the centre and then smearing various other fillings around desperately trying to disguise the fact that it is, in essence, only a cheese sandwich. (Costa’s brie panini, I’m looking at you.) Our third sandwich disappeared so quickly I was unable to taste much. It had something to do with ham, mozzarella and pesto but so fleetingly it probably can’t even remember itself – a sign of success.

My slight obsession with cheese had, by this point, forced me to order a whole board of the stuff and it was now that I developed a new adjective. The Gruyere was perfectly feet-y, the brie too feet-y (in a good way), the manchego was not feet-y because it’s not supposed to be and instead was as subtly powerful and creamy as I wanted. Here appears a blemish on the horizon though – the pecorino definitely could have been stronger, and if we’re really nit-picking, the mozzarella from earlier could have been creamier too. Moving quickly on though, we then indulged in a Spanish platter: chorizo, Serrano ham, manchego, olives, grilled garlic, roasted peppers and more quince jelly (hooray). The peppers were sweeter than I’ve ever managed to make them through roasting and the chorizo had a good paprika kick. The olives tasted like spicy sunshine.

There are two puddings that, if ever see them on a menu, I always order and they were both advertised here: French apple tart and Sicilian lemon tart. Alas, the lemon tart was sold out but I got over it and ordered the apple tart instead. I would have preferred the apple slices on top to be chunkier and the filling more deeply flavoured but this is just personal preference. A marbled chocolate cake had a magnificent texture and impressively, the sponge base was dry rather than being a claggy mess, a common failing elsewhere.

I should probably mention price at this point as it might sound like we spent a small fortune up there. Between three of us we had a coffee and a sandwich each, as well as two platters and two puddings and managed to spend just over £30. If don’t get as carried away as we did you could happily lunch for £5 and if you end up liking anything you’ve tried, you can buy them too. All of our food was sliced, spooned and spread from products at their counter whose provenance the owner was telling me about – the quince jelly from Spain, bread from a Swiss baker in Sunderland, butter from a local dairy, coffee from Italy naturally. They also have a small selection of groceries on offer including the amazing balsamic vinegar, the quince jelly, orzo pasta, pink fur apple potatoes, beetroot.

The key to Claypath Delicatessen’s success is simple: excellent ingredients and appealingly put together. Sandwiches must be more than sum of their parts, their components should taste better together than they do alone. Luckily for us, that is achieved here.

Open from 10am but not on Sundays.