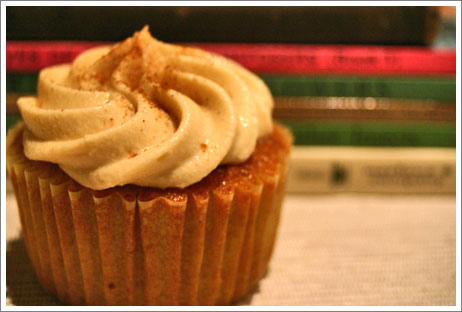 I am a member of my college’s ‘pudding society’ and this recipe won me last week’s heat! There are few people who don’t like cakes, but the addition of Oreo cookies takes the next level! They were so successful, I’ve had a request from my flatmate to make a cake version for his birthday next week. The method is very simple and fool-proof, but the results are impressive looking. A food processor is definitely the tool for crushing the biscuits, but if you don’t have one, placing them in a plastic bag and beating them with a rolling pin will do the job adequately. I made two-tone cupcakes by splitting the mixture into two after stage 4, adding a tablespoon of cocoa to half and dolloping a spoonful of each into the case, but feel free to plump for either chocolate or plain mixture according to your preference.

1. Preheat the oven to 180oC and put cupcake cases into a bun tray. Add half an Oreo to each case, reserving the other half of each with the cream attached.

2. Soften the butter (using either an electric mixer or by hand) and then add the sugar, continuing to beat until soft.

3. Add half of the egg mixture and sieve in a little flour, mixing well.

5. Crush or coarsely chop the reserved biscuits and fold in to the mixture with the vanilla essence.

6. Fill each case to about two-thirds full and place in the oven to bake for approximately 20 minutes until the tops are springy to touch.

7. Remove from the oven and allow to cool before decorating.

8. To make the icing, beat the icing sugar and butter together until creamy, then stir in the cream cheese, continuing to beat until light and fluffy.

9. Pipe or spread on top of the cupcakes.

10. Crush the remaining cookies and either sprinkle on top, or carefully dip the iced cupcakes into the crumbs to completely cover. Alternatively, chop each biscuit in half and place on top of each cupcake.