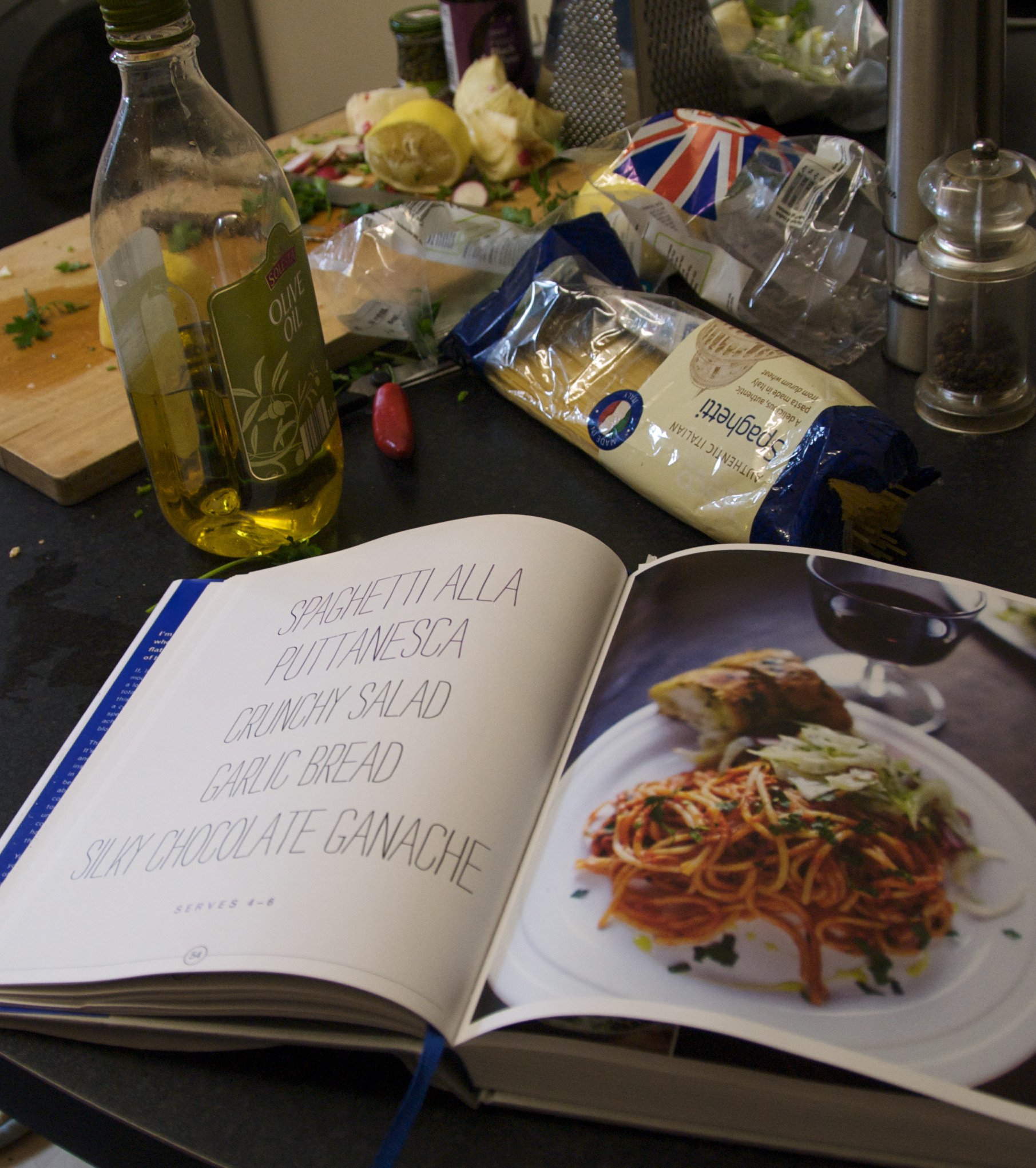 Is it possible to put a two-course meal with side dish for four on the table in 30 minutes? Images by Daniel Jeffries

Thirty minutes on the clock. Thirty minutes to turn the ingredients on the table into Spaghetti alla puttanesca, fennel and radish salad and chocolate ganache, a meal from Jamie Oliver’s new concept , which claims to put a main course, side dish and pudding for four from scratch to table in, well, thirty minutes. Anyway, it’s a few minutes until kick off, Rachel has read the recipe through a few times and is standing poised with a knife.

12.00 The ciabatta is open, looking slashed already, waiting for garlic and parsley, sitting on oiled greaseproof paper. Looks better than it sounds. We agree at this point that no obscenities will make it to print. We also realise that the time pressure might add to the mess of the situation but a brief discussion (Rachel, me, three housemates and a photographer) agree that Jamie rarely looks tidy when he cooks so this is OK. It’s true, look out for all the splashes and smears that are hidden behind the film camera’s focus next time you watch him.

12.01 Rach says she needs a quicker herb cutter. We briefly discuss the two handled . This becomes a recurrent theme actually – the speed required to complete these recipes is provided by a real array of kitchen gadgetry. We discounted two of the book’s meals due to lack of food processor and blender. Although we’re only one minute in, Rachel realises that she won’t know if she’s behind as the book doesn’t come with minute-by-minute timings. On reflection, the unusual circumstances of our cooking means that timings would probably be, for the average dinnertime chef, less than necessary.

12.04 Garlic bread in oven. I imagine at this point Jamie would slam the oven door, rub his hands together while walking back to the chopping board with slightly hunched shoulders and saying a reassuring “lovely jubbly!” to the camera. Instead, Rach has a few shreds of parsley stuck to her fingers and is getting on with the next task. It strikes me that TV chefs must have to learn to look up and down a lot when they’re cooking.

12.05 Lots of loud cracking noises as the chocolate is broken up against an obliging work surface. It’s then put in a bain-marie over the water which will cook the spaghetti. As I start to salivate I realise I’ve rather cunningly managed to get a cooked lunch out of this.

12.07 Garlicky smells are rising from the oven already. Rach adds the butter and cream to the pudding, and then grates in some clementine rind. There seems a lot left to do, the pasta not having been started yet…

12.08 …but never doubt Jamie: time for the spaghetti to start cooking under the chocolate, but the sticking-out ends prove a slight issue.

12.10 Now it’s time for the sauce, which requires more crushing of garlic. Time to find the earlier-discarded crusher. I too often find that time pressure makes decisions as to where to discard things more irrational. I try to forget about the time I failed to make a roulade and instead ended up with a kitchen scattered with sauce sodden tea-towels.

12.12 Capers, anchovies and oil in too. A chilli is being taken to task on the chopping board but blunt student knives making this more difficult than necessary. I’m quite surprised the recipe calls for a whole chilli actually, with chilli flakes seeming the spice du jour.

12.13 It all seems to be going so well, but have we hit the first problem? The chocolate is refusing to melt. We pass an emergency measure to wait and see. Parsley stalks go into the sauce. The recipe provides a useful reminder to check on the spaghetti. Back on track chaps.

12.15 Tuna time. Draining takes a while. One housemate seems to decide that thirty minutes for lunch just isn’t quick enough and makes a brave dash for the fridge, returning yoghurt in hand.

12.16 Olives are added to the sauce now too, and a typical Oliver embellishment of cinnamon, swiftly followed by the passata. Chocolate looks to be meandering its way to meltedness too. Another housemate interrupts to steal olive; then there were seven.

12.19 Time for the fennel and radish salad. Apparently this is the first time my chef has tackled fennel, although appearances are deceptive. Magimixing the vegetables reduced the radishes to woodchip before the fennel is showing any scars but an extra few chops eradicates this problem.

12.22 The salad is seasoned with lemon, olive oil, salt and pepper, and a willing porter whisks it away, making it the first dish to reach the table.

12.24 Everything seems to be coming together. The chocolate is finally melted and all the ingredients are combining. The pasta is definitely done by now – in fact I think there should have been instructions for it to come out a while ago.

12.26 The kitchen looks slightly worse for wear but it smells amazing. The ganache is being plated/cupped up. An air of confidence has now edged its way into Rachel’s voice. The only obstacle to completing on time might be the hungry housemates.

12.27 Garlic bread out, and taken to table smelling good and looking suitably rustic in its paper wrapping.

12.28 The drained pasta is added to the sauce. I always find mixing spaghetti and sauce surprisingly challenging and so I take comfort in the slow pace of Rachel’s approach. It did take a minute, I promise!

12.29 Some final lemon juice is added to dish, and some parsley ripped on top.

Task completed! These timings may look too convincing to be true, but that would be to underestimate the skill of my chef. You may criticise the book’s concept for rushing the joy of cooking or for sometimes requiring obscure ingredients and expensive equipment. To construct meals that can be done in such a short amount of time, however, to me illustrates considerable skill on the author’s behalf. And, as we’ve seen, the book definitely lives up to its title.