Towards the end of term, with Christmas stretching my budget to an upsetting degree, I decided to see if I could make a chicken last an entire 7 days.

I cooked my chicken in a 180°C oven for approximately 1hr 45 mins, with salt & pepper, and stuffed it with lemon.

I had bought a cheap, plain cheese pizza and topped it with some of the chicken, pesto, even more cheese, tomatoes & spinach and cooked it for about 12 minutes.

Conclusion: quick, easy and tasty. Plus it cost me less than £2 for the whole dinner. 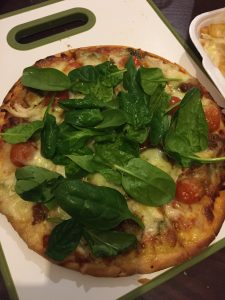 It was a Sunday, so I heated up a leg of the chicken with some gravy, and made myself a little roast dinner, with carrots, broccoli and roast potatoes.

Conclusion: who can resist a good roast dinner? The chicken tasted yummy reheated, although possibly would have been moister if it has been cooked on the day (but the gravy counteracted that). 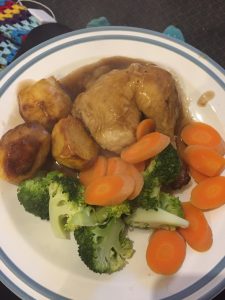 I took some of the breast meat off the chicken and used it to make a pasta bake. It had a tomato sauce (with herbs and paprika), with broccoli, bacon and topped with cheese.

Conclusion: not only did this feed me for 2 days, I also had enough to give two of my housemates dinner one evening. Pasta bakes are a really easy and cheap way to make dinners for multiple nights and stretch ingredients further. 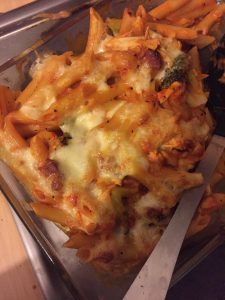 I bought a 80p baguette which I filled with chicken and salad & had with curly fries (you could also make your own healthy wedges with potatoes, little bit of oil and paprika).

Conclusion: a quick dinner, and you could have added bacon etc. if you wanted to make it a little bit more exciting. 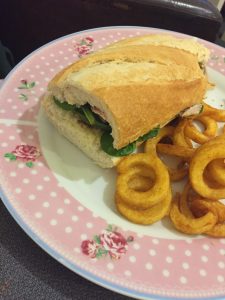 I took off all the chicken that was left, and made a stock with the bones. Once the stock was done, I made A LOT of soup – with chicken, butternut squash, swede, pearl barley, carrots and herbs.

I had enough soup to freeze a big batch too, so I have dinners for future

Conclusion: I probably made more soup than necessary, but it’s definitely a good way to make a meat last, because you bulk it out with grains and pulses 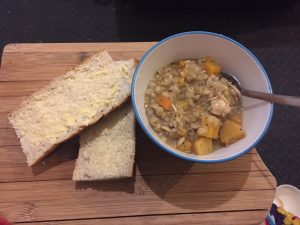 You definitely can make a chicken last a week (or more if you are lax about food hygiene and best before dates – which I wouldn’t recommend). The best way to safely make the chicken last would be to freeze it once you have cooled and cooked it, and then periodically defrost it – always checking it looks and smells okay before you eat.

Surprisingly, the chicken didn’t get repetitive, because of the variety of ways there are to cook it (until I was faced with multiple days of soup, hence the freezing). I would recommend it as a cheap way to still get meat in your diet, as long as you don’t mind carving it etc.

Overall, I would say this has been quite a successful experiment, and because chicken is so versatile, you wouldn’t have to go out and buy new ingredients, as you can always pair it with things in your cupboard or fridge/freezer