Getting Lucky at Chinese New Year 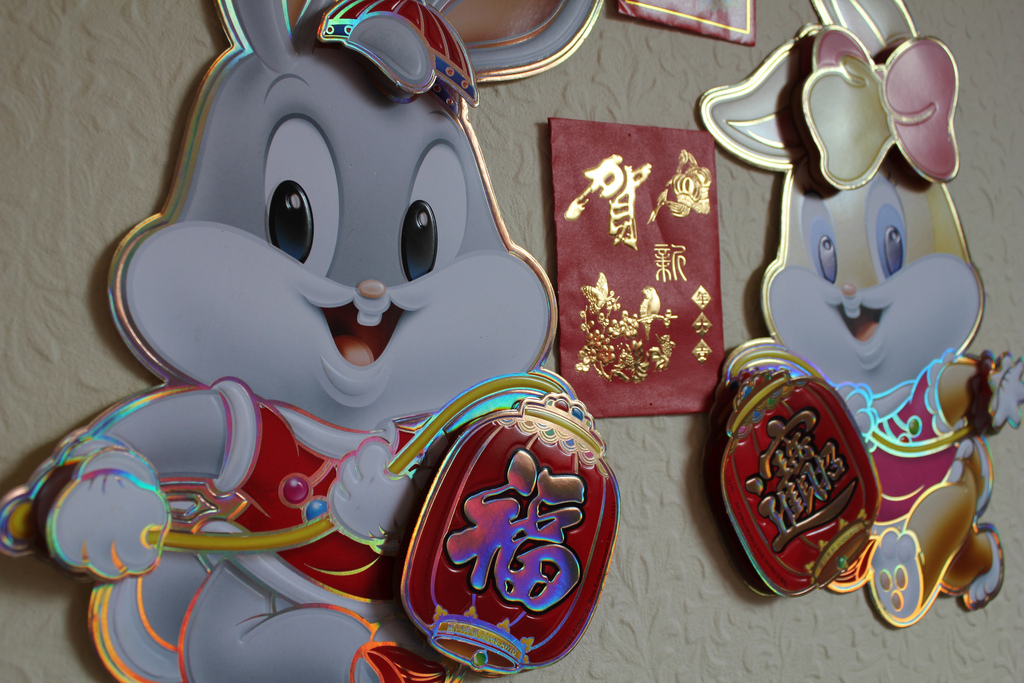 Although I haven’t celebrated it at home for over five years, my favourite holiday has always been Chinese New Year. I’m tempted to compare it to Christmas in the West since it’s pretty much celebrated on the same scale in the Orient. It’s one of the biggest holidays, with the most history and traditions. In a similar fashion to Christmas, you receive gifts, you spend time with family and of course, you watch the days (fifteen, in Chinese New Year’s case) dwindle by eating, eating, eating. After all, what would a real holiday be without a little sensory indulgence of the best kind?

When comparing meal habits at Christmas and Chinese New Year, I can confidently say: Christmas, step aside. Chinese New Year is more than just one day of eating. A massive amount of relentless food consumption happens before, after and during the entire ushering-in of the New Year (although truthfully most happens near the beginning and end). Eating is more than just a way to celebrate. Most importantly, when the Chinese eat, they eat with meaning – and by this I mean every dish has its symbolic value. Perhaps this is why people condone so much food indulgence, as eating these dishes is meant to start off New Year for you in very good stride. It really is a way of life.

Chinese New Year is a good time to get fat within reason. There are plenty of delicious things to eat, and what’s more, they’re all good for you, although more in the figurative sense than the health sense. It was a learning experience finding out which foods symbolise which good fortunes; I am not fluent in Chinese, being the epitome of a “Twinkie” as my friends so kindly brand me (look it up, you’ll understand). I had to do some research but unsurprisingly, it’s all very positive and prosperous, exactly what a New Year should give everyone the opportunity to reap the benefits of.

I used to be ignorant of the fact that what was gifted to others also held great symbolic significance. Luck, prosperity and everything and anything that you would wish well on loved ones is embodied in the food eaten, as well as other traditions. For example, giving out money in red packets known as “ang pows” is done because it brings luck to the couples who dish it out. Similarly, the action of giving mandarin oranges is known as “song kum“, which is a phonetic homophone for “giving gold”. Who wouldn’t want to do so in this auspicious time? I certainly would, mandarins are well cheaper than gold nuggets. Easy out option, I’d say, and very symbolically beneficial.

The real face-stuffing begins on New Year’s Eve with the traditional family reunion dinner. All family members (on the paternal side, so girls attend their father’s reunion until married, when they attend their husband’s reunion) – and I mean all – gather together to usher in the New Year the only way they know how. Now, I excuse myself by being one of the few relatives that lives overseas, but it’s only to my detriment as I lose out on the luck the rest of the family gains. The family reunion will always begin with a dish called “yee sang“. This is a fish and salad dish, usually a huge plate for whole table to share. It literally means “raw fish”, but the words sound like “increase in abundance”, hence the superstitious tradition of eating it on the night and as much as possible during the New Year. When it arrives, everyone will toss the salad, known as “lo hei“. You’re technically “tossing up good fortune” when you do this, so toss it high, toss it good. Wealth, prosperity and money will augment accordingly. It’s the essence of good luck, and it is also paramount that you eat a bit of the fish (there are only a few small pieces scattered into the salad) because the word for fish, as mentioned, means “abundance” or “more”.

On the first day of Chinese New Year, which is actually this coming Thursday this year, my dad said that his family used to eat vegetarian. Cue the gongs, this was the ultimate shocker. It really is the first time I’ve ever, and I mean ever, heard the Chinese do anything remotely non-meat laden. It was revealed that eating vegetarian is, in fact, a sacrifice the Chinese make for one day. It is to thank the gods for the good year that has just passed. This shed some light on the strange tradition, for not eating meat would really typify the ultimate sacrifice for the Asian population. A typical vegetarian dish on this day would be “fatt choy” which I can only put crudely as “black moss”, a black seaweed-like vegetable, but thinner, like hair. Again, the name means “prosperity”, which is why it is eaten. Evidently, its description does nothing for the dish’s appeal, but if you want to be prosperous, you better dive in there.

You may notice a trend emerging: the symbolic meanings of the Chinese New Year dishes accord with the lucky homophones of the dishes’ names. Therefore, other necessities of the New Year include eating prawns – “sek ha” – which literally means to “have a laugh”, and oysters – “ho see” – which means “good news”. Noodles are also good to chow down on, as they symbolise longevity for reasons one can probably guess from their physical appearance. Follow these traditions and you’re sure to ring in the New Year most prosperously.

Whilst I realise I exude a light hearted, almost joking tone in doling out this information, I really cannot stress enough actually how important these traditions are in the Orient. This list is not a short one, and I’ve only touched on how best to ensure your taste buds bring you luck over the year. There are many other superstitions omitted because it’s clear you’re in the Food section of The Bubble to get your mouth watering rather than to learn not to wash your hair on New Year’s Day for fears of washing away the luck (no joke).

So this Thursday, consider a bit of Chinese to welcome the prosperity of the New Year (even Chinese takeaway is acceptable… just about). Revel in the abundance of fortune this Year of the Rabbit should bring you and most importantly, have a wonderful Chinese New Year! Gong Hei Fatt Choy!