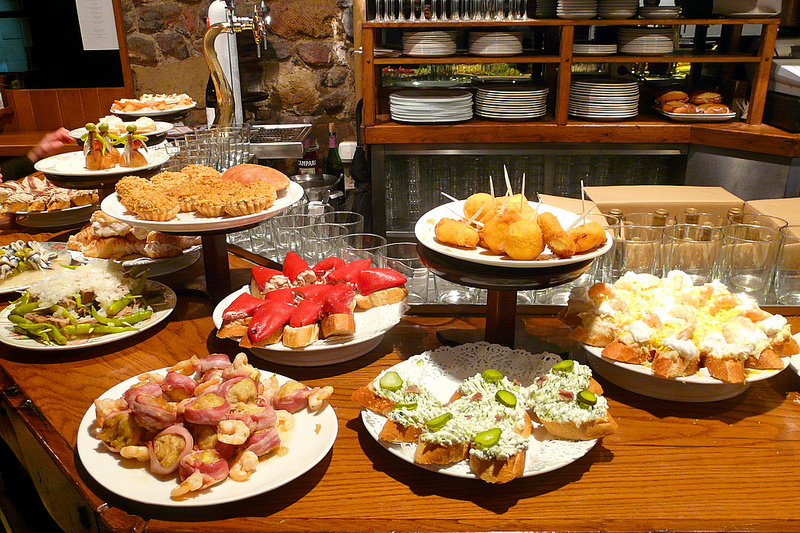 It was with significant excitement that I travelled to Lugo, in the centre of Galicia, to start my year abroad. To my devastation, the past months have revealed that I’ve managed to settle in what must be the only place in Spain colder and wetter than Durham. And although I thought that even Galicia’s cheap tasty wine couldn’t make up for that, I soon found in Lugo a place of beauty and culinary delights.

Tapas – how typically Spanish, how delicious! Tapas are available nationally in bars, usually to a small but significant cost ranging from 3 to 7 euros, yet Lugo is unique in that tapas are ubiquitous and most importantly FREE. Yep, even a 1 euro beer guarantees delicious and varying tapas, from tortilla and chorizo on bread to croquettas – a cheesy hammy beauty of a breadcrumbed fried roll – and even to whole plates of rice, beans and stew. And you can help yourself more than once (although apparently some places don’t like you taking the whole tray away with you…). Some cafés serve tapas of a sweet kind; my haunt, for this sole reason, is ‘Donna Varini’, which brings you heaps of mini ‘pains-aux-chocolat’ and ‘croissants’ with every coffee.

Tortilla is my favourite tapas – don’t make the mistake of thinking it’s like an omelette, as I did, for this dish is to the omelette what Fleetwood Mac is to One Direction. It’s moist, full of flavour and a stock Galician home dish.

But the month of September saw tapas of a very different calibre enter the scene, with the ‘Annual Tapas Competition’ – a fortnight in which 45 bars in Lugo serve their tastiest tapas specialities (priced 2–4 euros this time), to be judged by the public. Generously helping my friend on her quest to taste the tapas in all 45 bars (and thus enter a draw for various exotic holidays), we strode then waddled from bar to bar in quest of the perfect tapas.

Dwindling funds and even more dwindling mobility limited our night of culinary sampling to a fairly cursory overview of what was on offer, but it was enough to get an idea. From goat’s cheese on garlic toast spread with a meaty paste and grilled with honey (all Galician sourced) to crepes filled with grilled strips of pork with rocket, fig sauce and Galician cheese (cheekily named ‘tetilla’, after its breast shape) with a strawberry and chocolate decoration. The thrill was almost too much for a Herefordshire lass whose gastronomic highlight is fish and chips Friday at college!

Galicia is very much still a maritime community and seafood is a staple and basis of many typical dishes. That’s why the dish Lugo is most famous for is pulpo: octopus. Whilst the thought of sucking on some fishy suckers wasn’t what most appealed to me about Galician food, I was persuaded to bite the bullet by enthusiastic reports from other people and its totemic status in the ‘Best Festival in Galicia’, San Froilán (a fortnight of traditional dancing and general festivities that fills Lugo’s streets every October).

Although there are many ‘pulperías’ (restaurants specialising in pulpo), for the most typical experience you must head for one of the ‘caseras’ – temporary out-of-town restaurants set up for the sole purpose of providing Lugo with its yearly fill of octopus. It’s boiled whole outside in a giant copper cauldron for about 20 minutes, the head is usually discarded, then the tentacles are sliced, sprinkled with paprika and coarse salt, drizzled with olive oil and usually served with a huge chunk of wholemeal bread, costing around 8 euros for two people. Paprika and olive oil compliment the pulpo’s mild flavour, and once you get used to the vaguely amphibian chewiness, you will understand why locals queue up for this most popular of delicacies.

I can’t write about the local foods without mentioning the alcohol, which facilitates many a great night ‘on the lash’, as they say here in Galicia. Most typical is the liquor – aguardientes (‘firewater’), made using ‘Orujo’ which is obtained by distilling the pomace of grapes – basically what is left over after the making of wine. As such it is plentiful, and forms various liquors, such as ‘Licor Café’ (ideal for that stage in the night when the classic ‘subway-then-bed’ appeals more than grinding on, literally, till That’s Amore). My personal favourite is ‘Crema de Orujo’, made from Orujo, sugar and condensed milk: a creamy delight reminiscent of Baileys. Another classic is ‘Aguardiente de hierbas’, made from Orujo and herbs. It’s typical for Galician families to have a shot of some homemade liquor after lunch, and at many restaurants in Lugo, pure ‘Aguardiente de Orujo’ (over 50% alcohol) is brought out to be added to the coffee. The many different ciders here are also delicious, though Asturias, to the East, is really the region to visit if you want to try Spanish cider.

As you can see, not only is the regional food tempting, but Galicia enjoys a rich culture of tradition, hospitality and fiestas, enriched by its own unique language. So for an authentic Spanish experience and a treat for the taste buds, head this way.