‘Erm, excuse me, kitchen staff – there’s a slug in my noodles’ 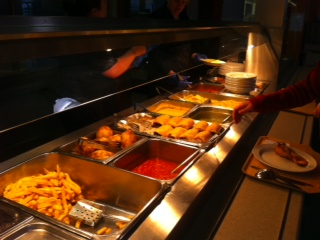 A sudden yelp from an extremely distressed girl in the dining hall caught my eye at lunch in the Hild Bede dinner hall. Accompanied by an equally disgusted-looking friend, she hastily picked up her plate and made her way over to the kitchen staff. It turns out that there was in fact a slug in her plate of Chinese noodles. Noodles?! A creepy crawly making its way into your lettuce would be understandable, but the fact that this brave little guy made his way onto a plate of hot cooked food does make you stop and think about the hygiene levels of the food that we’re chowing down on a daily basis.

Attending boarding school sets you up for institutional food pretty well. Let me put it this way, I certainly wasn’t expecting haute cuisine when I applied to Durham, which as a university is unusual in that only one of its colleges offers self-catered accommodation. Admittedly catering at Hild Bede is not as bad as people make out. There are always two meat options and two vegetarian options available, not to mention a soup of the day and salad bar. However, although this may sound varied, it’s just over a month in and most students are already tiring of the meals available. Seemingly you really have two options at dinner: meat-two-veg or carbicide. The meat is usually dry and for some reason always chicken, and the carb overload, albeit satisfying, is taking its toll. (I’ve fully embraced the ‘Freshers 15’ – I blame curly fries and Saturday Brunch). That’s just the problem though; it’s extremely difficult to eat healthily with the food provided. There are hardly any fish options available, and if there are, they are usually so thickly covered in deep-fried batter or breadcrumbs that you can hardly taste the fish. On the whole, the food doesn’t seem at all fresh. Granted, its nigh-on impossible to present something fresh when you’re cooking for the masses, but the bizarre meals from leftovers suggest that freshness really isn’t top of the priorities. There have been some absolutely fantastic, not to mention resourceful, variations over the past few weeks. The runner up has to go to ‘Chicken Lasagne’, with ‘Fish Tacos’ proudly taking first place. Yuck.

Aside from the food itself, another issue some students have is the timings of meals. They do seem a little early. Lunch begins at 11.45 and dinner at 5.30. In order to avoid the mad rush and queuing you are compelled to eat at extremely early times which usually means you’re hungry again by the time you get into bed! Last Sunday, due to an ‘Old Boy’s’ formal taking place in the dining hall, dinner actually finished at 5.30, and started at 4! Speaking of formals, am I alone in thinking that the food is no different despite the fact you’re paying for it? The lovely tradition and occasion to dress up is enough to make the evening special and worthwhile, but the food is exactly the same as any other night… I suppose the wine is what’s most important anyway.

So this is painting a pretty bleak picture of college food. What’s good about it? I don’t know about other colleges, but the breakfast muesli at Hild Bede is delicious. Nobody knows what heavenly, mysterious concoction it is but it gets me up for lectures every time. A big fruit basket is another plus, as are the lovely yoghurts that offer a yummy alternative for dessert. Since being here I’ve embraced the apparent trend of chopped banana in the vanilla yoghurts – don’t knock it ‘til you’ve tried it! (Much nicer than chopped banana in the thin, tasteless custard). So far the vegetarian meals have also been pretty impressive. Although I’m not a veggie myself, there have been many occasions where I’ve opted for the Quorn option and been really pleasantly surprised, so again, give it a go if the meat option doesn’t take your fancy!

All in all, indisputably the best thing about being catered is the convenience. Now being so used to having meals on tap, it’s impossible to imagine having to plan a week’s meals, go out and do a Tesco’s run, prepare the food, and cook. As a terrible cook myself, I know for a fact I would be living up to the student stereotype of living off pasta. Friends at other universities are always extremely jealous of photos sent to them of Saturday brunch fry-ups, or a Sunday Roast; luxuries that they can only dream of, or have to travel home for! Certainly next year when I’m living out, penniless and desperately pushed for time as always, I know I’ll wonder why on earth I complained about college food… Unless I find a slug in my next meal!