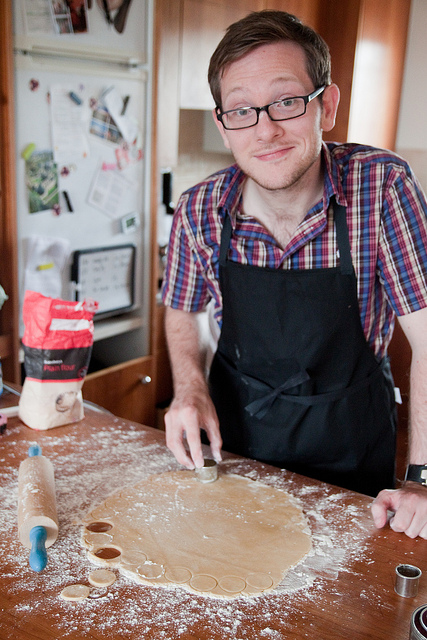 The British public’s new found love of baking was very much in evidence in Durham on Saturday, as, despite arriving a quarter of an hour early, I was forced to fold myself onto a small corner of carpet in the pop-up café on Palace Green in anticipation of Edd Kimber’s book launch and cookery demo. For those of you who failed to make it out of the house that weekend (we’ve all been there), Durham played host to its annual Food Festival 22–23rd October, which although having a rather steep entrance fee of £2.50, fully made up for it with the vast quantities of amazing tasters on offer, from pigeon burgers and local turkey to delicate macaroons and homemade fudge.

The weekend also featured a programme of live cookery demonstrations, the line-up for which included various local restaurateurs and university chefs, as well as the winner of the first series of BBC 2’s Great British Bake Off, Edd Kimber, who just launched his first book of mouth watering cakes, cookies and all things baked. Research on Edd ended up consuming an entire afternoon, as exploration of his website and blog led me all over cyberspace, what only can be described as ‘perving’ over multitudes of recipes, delicious looking cafes and Edd’s own adventures in baking. I was left with was an empty stomach and a rather disdainful attitude towards the unimpressive and slightly stale chocolate digestives lurking at the bottom of our house biscuit tin.

Edd’s first recipe on Saturday was a chocolate and chestnut torte, which was completely flourless, its light cake texture instead being created by folding chocolate into meringue-style eggs, which then set while baking, creating a seriously tasty alternative to a traditional cake recipe. Despite Edd’s assurance that the torte was ‘light’, the quantities of butter and cream going into the mixture seemed to indicate otherwise. ‘At least you know what you’re getting when you bake your own stuff,’ said Edd after his demo. ‘Butter is so much better for flavour, and when you’ve made it yourself, you’re aware of how much has gone in, so you just have to be wary of that.’ Before I knew it, the formidable butter and sugar and chocolate mixture had been folded into the snowy egg whites (top tip from Edd: turn the bowl as you go as well as folding with the spoon; it’s quicker, meaning you are beating as little air out of the egg as possible) and the whole thing had disappeared into the oven. Even if Edd did have all his ingredients, as well as every utensil under the sun, within arms reach, he certainly still proved that home baking doesn’t demand any more time than slogging up to Tescos and back.

I couldn’t help being impressed by Edd’s cool and calm attitude to baking: having had more than one cookery disaster of my own (the results of which I normally forced upon my dad, well aware that what he was eating definitely did not deserve the expressions of enjoyment he dutifully produced), the pressure of live cookery demo would have certainly turned me into a heap of nerves. I guess that after the high standards expected on the Great British Bake Off, where consistency, flavour and appearance of the contestants’ offerings is rigorously inspected, cooking a chocolate cake for a group of hungry fans would not be a serious challenge. The technical demands of the show’s judges are daunting for even the most proficient of home bakers. ‘The programme was a competition,’ reminds Edd. ‘When you’re at home, you shouldn’t be intimidated by the expectations on the show; have a go and if it doesn’t work, realise where you went wrong and it’ll work out next time. Get some friends round, a few bottles of wine – actually you’re students so you’ll probably get vodka if it’s cheaper – and just enjoy sharing food and cooking.’

As we waited for Edd’s chocolate torte to bake, he began to whip up what he officially describes as a dessert, but strongly recommended as a breakfast: banana Foster pancakes. Having long dribbled over just the sight of food on cookery programmes, the smell of caramelising bananas was almost unbearably good. Once Edd had started his banana rum caramel bubbling, he created a simple, easy and thick pancake mixture, using all the usual suspects: eggs, flour, milk and butter, with some sugar and baking powder to create the perfect fluffy American style pancake. When adding the flour, Edd pointed out that although its important in baking to measure your ingredients carefully, you have to also use some common sense – each batch of flour will be slightly different and vary in absorbency, so you might need to play with your quantities to get the perfect consistency to your batter.

While Edd fried his pancakes and delicious chocolately aromas started to drift from the oven, I couldn’t help thinking that the tasting promised in the festival guide might soon be upon us. And soon enough, plates of banana caramel smothered pancakes and beautiful warm chocolate chestnut torte were being passed round the audience. Eventually the plates made their way into my desperate hands. After one forkful, the temptation to scoff the entire portion into my mouth was almost too much, but in such a group of mild mannered baking fans, I decided this would certainly be unacceptable, even as a poor and ill-fed student. Edd showed how easy it is to create amazing food: in less than fifty minutes he had created a dinner party worthy dessert, and what I can only describe as the best breakfast ever. Edd’s advice to student cooks was simple: ‘I weighed twenty stone as a student. I was really bad and lazy and didn’t cook at all. Cook for yourself: it’s better for you and cheaper, especially when you use stuff like fruit when it’s in season – I mean who doesn’t love a good apple crumble?’

Try out Edd’s Caramel Banana Pancake goodness for yourself… perfect hangover cure? I think it would be…

In a large bowl, mix the flour sugar, salt and baking powder together. In a small bowl or jug, whisk the eggs and milk together. Whisk in the butter until fully combined.

Pour the milk mixture over the flour and whisk together until fully combined and smooth. Allow the mixture to rest while you make the sauce.

Melt the butter and sugar together in a medium pan. Once melted and fully combined, stir in the cream and rum. Leave the pan to keep warm over a low heat while you make the pancakes.

Heat a frying pan over medium heat, add a knob of butter and allow to melt and bubble. Immediately, pour a small ladleful of batter into the pan to make one pancake (you can cook two at a time if you are using a large pan). Cook until the underside is browned and there are a few bubbles on top.

Flip the pancakes over and cook for 1–2 minutes until browned on the underside. Put the cooked pancakes onto a large plate in a warm oven while you cook the remaining batter. Serve with slice bananas and the caramel rum sauce.