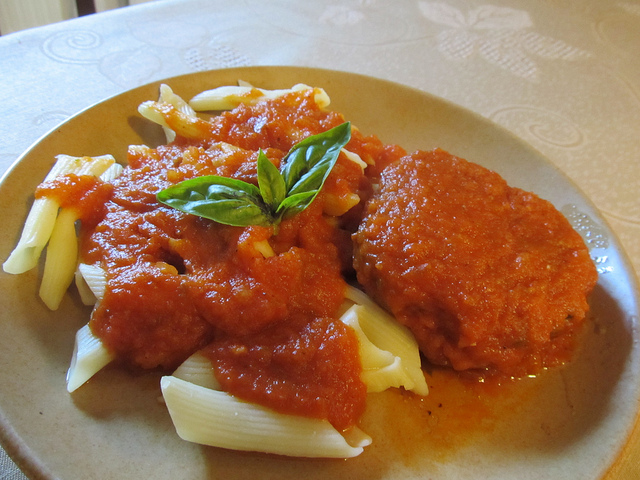 Simple and tasty: a sauce that anyone can cook up.

When I returned to Durham, a month ago now, I found myself in a position that I had never encountered before. I returned to a situation where I was expected to, amongst other things, feed myself every meal every day. I looked forward to pasta and pesto, pizza and Tesco meal deals, eaten blissfully in front of TV perhaps wondering what I’d get up to that evening. This slightly naïve foresight was quashed once I returned and realised that second year involves as much work as second years claim; I wouldn’t have time to do much as instead I’d spend my time doing things like spending two and a half hours scrubbing what appeared to be two and a half years’ worth of grime from in between the cracks in our shower.

My vision for the future was also sidetracked when my girlfriend pointed out that my ideas for food weren’t very healthy or cheap. It was at this point when I realised that, apart from a rather tasty bolognese, I couldn’t cook anything. Reader, you will maybe be sitting there wondering why someone who can’t cook is writing for the Bubble. If you profess to be good at cooking, I’d stop reading the article here. Over the past few weeks, I’ve learnt a few things and thought I’d like to share them. My target reader is not the good cook. Instead, it is someone like my housemate who has eaten pasta with no sauce for the past two weeks. If you are wondering what someone who can’t cook can cook, then this is your sort of thing.

So I’ll start with something basic, something that will address my housemate’s desperate need for something saucier on his pasta. It’s a tomato sauce. If you can make one of these, your Dolmio day can be whenever you want it to be.

These are the basic ingredients. If you made it with just these it would probably taste a bit dodgy, so maybe only just use the above if desperate. The measures aren’t entirely precise either. They’ll depend on the size of the tomatoes and onions, but you can taste test and judge for yourself.

To make this, you just need to chop up the onions and tomatoes as finely as possible. Fry the onions until browned, in a bit of olive oil, before adding the tomatoes. Once both look nicely cooked, you can add the some of the canned tomatoes; I usually add half a tin but it depends on how saucy you want the sauce to be. At this point, also add pepper, salt and a splash of tomato puree. If you have a sweet tooth, add sugar (within reason otherwise you’ll find the sauce tastes slightly like Pizza Express tomato sauce). Reduce the heat so everything simmers for a while. Pour in on pasta, put it on a meatball sandwich: do whatever you want with it. You’ll probably find it fairly bland, so here are some important ideas which can maybe make it actually taste of something interesting:

So there you have it, a super easy pasta sauce. My housemate can now actually put something on his tortellini apart from peas and frankfurters.