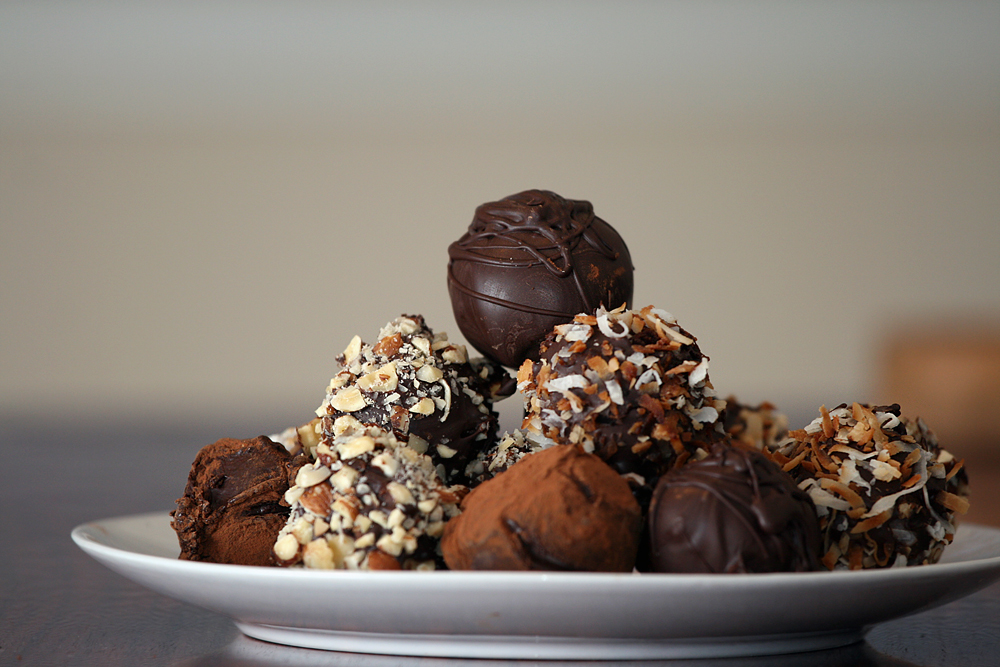 Truffles: can be both eaten as a food and used as a currency.

Another Durham University publication recently gave some rather interesting ideas for ‘healthy chocolate recipes’. Here’s mine. It is healthy. It has fruit in it. In this case it really is worth making the pastry yourself, I’m afraid.

Tart tin (about 22cm in diameter)

A mixing bowl or two

To make the pastry: sift together the flour, the two teaspoons of cocoa, and the icing sugar. Add the butter and mix (in the blender if you prefer).

Add the egg yolk and a very small amount of water; start with a tablespoon and mix. If the pastry does not start to cohere add a small amount more, but you want it so it is only just sticking together. When it’s at that stage, wrap it in cling film and refrigerate for at least half an hour.

Roll your pastry out onto some flour mixed with the extra cocoa powder and then line the tart tin with the pastry. Lay the greaseproof paper over the pastry then put the beans on top, and bake blind for about 20 minutes. Remove the beans and the greaseproof paper and bake for another 10 minutes. If it’s worked, the pastry case should be crisp and slightly browned. Leave it to cool (and turn the oven off; there’s no more baking needed.)

To make the filling: gently heat the crème fraîche together with 100ml of the double cream. Break the chocolate into a bowl and pour on the cream, stirring until the chocolate dissolves. If it doesn’t dissolve before it gets too cold, you can melt the mixture over simmering water. Cover it with cling film with a few air holes punched in it, and leave it in the fridge for a couple of hours.

Very lightly crush the raspberries with a fork, so the juices run slightly but the raspberries remain whole. Put them in a single layer on the pastry base. Whisk the remaining cream until thick but not stiff. Fold this into the chocolate mix and smooth over the raspberry base with a rubber spatula; refrigerate for at least an hour. Sift a small amount of cocoa powder over the top.

There are loads of variations on this, from cheap and cheerful to Heston Blumenthal’s take on it, complete with edible gold leaf and caramel mixed in a centrifuge. One technique is to use condensed milk to make the caramel but personally, I prefer the recipe below.

And 500g of dark chocolate

First step is to make the shortbread:

Put the butter, flour and sugar into the blender and combine, or mix by hand. Roll out to about a half inch thick on a lightly floured surface, then place on a baking tray lined with greaseproof paper. Leave this for an hour in the fridge.

After the shortbread has refrigerated, bake for 20–25 minutes until lightly golden. Leave this to cool and start on the caramel.

Put the cream in a saucepan and scrape the vanilla seeds into it. Bring to the boil and immediately remove from the heat.

Heat the empty heavy-based pan. When hot add a third of the sugar and the glucose. Heat this slowly until a caramel is formed and the sugar crystals dissolve.

To this add the remaining sugar until you get an amber coloured caramel. This should take about 15 minutes, but keep an eye on it.

Remove from the heat and add the butter, cube by cube, mixing well.

Pour this over the shortbread and leave to set.

Now melt the chocolate in the glass bowl, set over boiling water.

Pour this melted chocolate onto the first acetate sheet and spread to a thin layer. Allow this to cool but not set.

Put the second sheet of acetate on top, and put a weight on top of the acetate (this keeps the chocolate flat as it sets). Leave this for at least a couple of hours, then peel off the acetate.

Remove the caramel-covered shortbread from the baking tray and top with the chocolate sheet. If you are Heston Blumenthal, add a small amount of edible gold leaf, if you aren’t, don’t. Eat.

This last one is a bit of a cheeky one to add; it isn’t so much a specific recipe, more of a starting point.

The simple fact is that truffles can basically be made to include any flavour. What I will therefore do is tell you the techniques (there are two – one for flavoured truffles, the other for infused truffles). I’ll suggest a few flavours that you might like to experiment with, too. Warning: small portions are not possible with this recipe.

This technique is pretty simple. Pop the ingredients in the glass bowl, put that over the boiling water and stir until the chocolate has melted and the bowl is full of thick glossy molten truffle. Add a couple of the flavourings suggested at the end of this recipe if you’d like.

Cool the truffles in the fridge and shape them. If you want to make them look a little more professional, dip these in melted chocolate.

(or any amount in those proportions)

Put the cream in the saucepan and bring to the boil. Add your chosen flavourings and remove from the heat.

Cover the pan with cling film and leave to infuse for 1–2 hours.

Sieve out the flavourings.

Melt the chocolate and butter together, again over a pan of boiling water. Gradually add the flavoured cream, mixing continuously. Taste it as you go, and add sugar if you wish.

Leave in the fridge to set, for an hour minimum.

Again, you can make them look more professional by dipping them in melted chocolate, and you can also grate chocolate or sprinkle chopped nuts over them before the chocolate sets. Eat. Or use as currency.

With any luck these recipes should get your imagination going. Happy chocolating, and please feel free to comment with suggestions for additional truffle flavours!