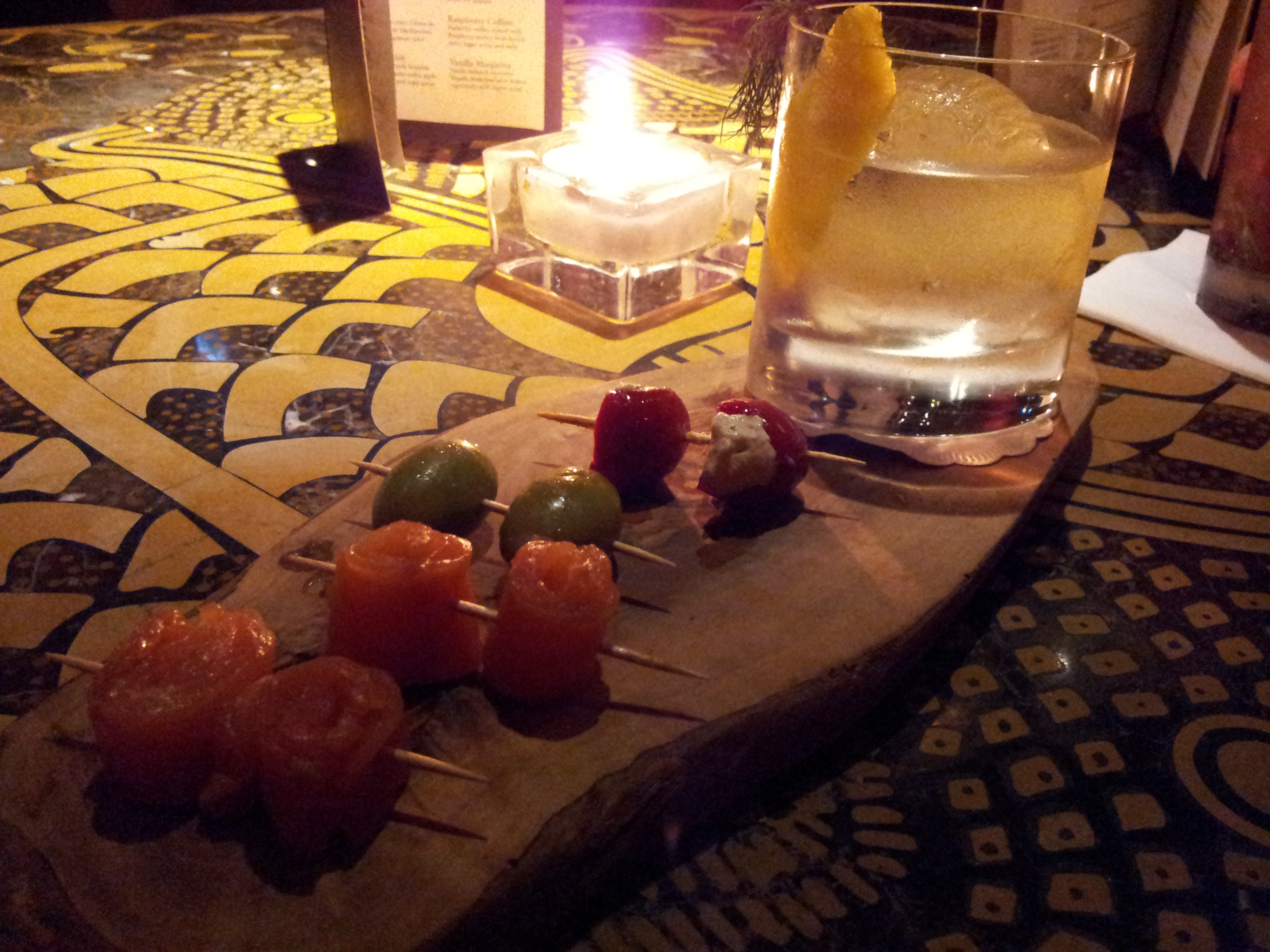 The ‘Salm ’n Martini’ in all its glory.

Yes, you read the title right and yes, the world as we know it has officially gone mad for meat. If you’re not already familiar with it, I introduce the phenomenon that is the meat cocktail – an alcoholic concoction that left me equally as intrigued as you are.

Earlier this spring Shaka Zulu, a South African bar and restaurant in Camden, launched its meaty beverage range. Initially, I suspected this was far too ambitious to be true, yet these cocktails are exactly what they boast. Meat and alcohol have united. But is it worth the risk?

I visited Shaka Zulu this summer to see what all the fuss was about. Walking around the vibrant Camden town, rather anti-climatically, I initially could not find Shaka Zulu. There I was with my Smartphone, navigating my way through London and still could not find this gem. Admittedly, I was on the brink of giving up, of throwing in the towel, going home and stuffing my face with chicken and spirits to emulate what could have been. And then, as though my prayers had been answered, a Shaka Zulu employee handed me out a fateful flyer and directed me to the bar. First tick for Shaka Zulu – it reminded me of Narnia – you come across it completely unexpectedly, often in times of quest.

Once inside, I knew I was in for a treat. My first judgment, strange as this may seem, was based on the escalators inside. For me, any bar that can boast two floors connected by escalators can say its worth its salt. And the ambience of the place was just lovely. A darkened, tribal bar with incense pillars really set the South African scene with a modern twist. There was only one slightly awkward moment (that I should probably confess I totally projected myself). The ground floor was the restaurant, the first floor the bar area. For a millisecond I dithered as to what exactly I was actually here for – was I eating? Was I drinking? My foot indecisively hovered over the escalator step before I was directed to the bar area for my mission ahead.

So, there I sat, in the bar area, having ordered the ‘Salm ’n Martini’, awaiting my fate. My sister, next to me, had rather sensibly ordered the ‘Shark Alley’, a lovely fruity drink with raspberry vodka, fresh pomegranate and rosemary with lemon and sugar. Before I divulge all detail however, I’ll give you a little snippet of the meaty cocktail range Shaka Zulu have on offer.

The meatiest of the cocktail trio – a blend of tequila reposado infused with chorizo, vegetable juice, balsamic vinegar, smoked sea salt pepper and port. It is served with beef biltong strips and grilled chorizo.

The spiciest of the cocktail trio – made from a 24-hour mature Bloody Mary mix and bacon vodka. It is served with celery, crispy smoked bacon and a skewer of soft cheese and cherry tomato.

The, erm, fishiest, of the cocktail trio – made with smoke chilled vodka, lemon pepper and a huge ball of ice. It is served with skewers of smoked salmon, stuffed baby red peppers and olives.

‘Salm ’n Martini’ seemed the safest option (or so I thought). As the waiter brought it over, I have to say it was very impressive. The presentation was just exquisite; a rustic board held the skewers and glass in elegant formation. Somehow, on first sip, the vodka managed to taste a little like smoked salmon, which was just mind-blowing. I was fine on my first slug of the spirit, however, it eventually became like some drinking game, yet a very classy one might I add. Take a swig, wince at potent spirit, try desperately to wash down with salmon/tomato/olive (delete as appropriate) on skewer, repeat as necessary.

Which leads me to say that I think the main perk of these cocktails is just how fun they are. I’m not such a big fan of downing straight spirits, so doing so whilst eating skewered treats became rather comical. Rather than just passively drink the drink, you really had to put some thought into it, really think about what you were doing. Would that piece of smoked salmon really take away the sting of that last sip of vodka, or would a tomato do a better job? These were the critical questions.

On the whole, I’ll try and summarise how I felt at the end of my experience for you in a few points. The first is most probably to be expected. You’re in a London bar, it’s going to be impressive. Shaka Zulu is exquisitely tribal and plain luxurious. We were given nibbles with our drinks and the whole ambience was very swanky. This also leads onto my next point. London is expensive. My meat cocktail was £15.50 which is hard work on a student budget. However, at the time of my visit, Shaka Zulu were also offering a Happy Hour. This runs from Sunday to Thursday until 9pm and on Friday and Saturday until 7pm, and selected cocktails are on offer for £4.95. My sister had her ‘Shark Alley’ on this deal, which was really refreshing at this reasonable price.

But the big question is – how was I feeling about that cocktail? On the whole I would say that if you find yourself in London, Shaka Zulu is a definite to visit, and whilst you’re there you may as well tick a meaty cocktail off your bucket list. However, for the faint of heart (or the lightweights out there) perhaps swap the meaty beverage for one of the cheaper and tastier cocktails.

If you want to try something a bit different however, I would definitely recommend this fun meat-infused experience.